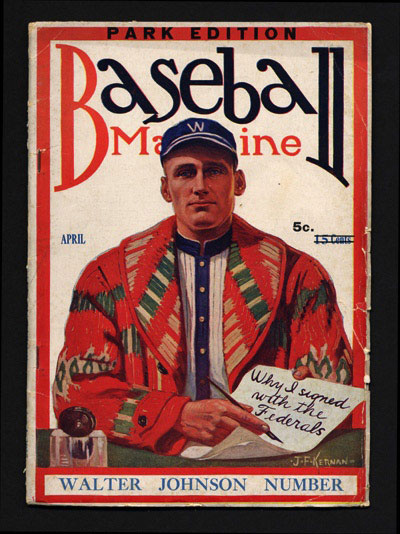 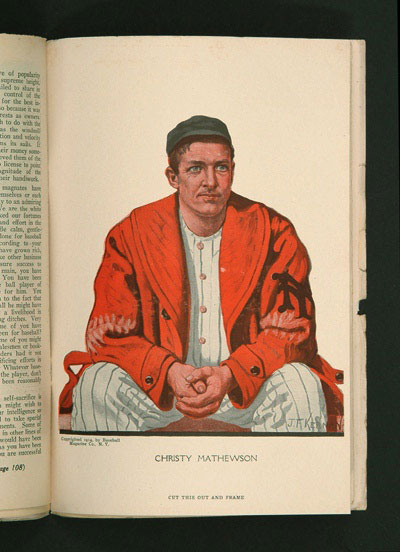 Extremely rare special "Park Edition" of the April 1915 Baseball Magazine, featuring Walter Johnson on the cover, was available for sale, as a special promotion only, at Major League ballparks. This "Park Edition" is special not just because of its extreme rarity (this is the only example we have ever seen), but also because the interior includes a beautiful full-color premium of Hall of Fame pitcher Christy Mathewson, which is designed to be removed and framed, and which could only be obtained in this "Park Edition." The magazine has been lightly handled over the years. Due to the slightly oversized cover, the cover has a few minor edge tears and creases, which do not significantly detract from its otherwise Excellent appearance. The interior pages are in Excellent condition. The Christy Mathewson premium inside has never been removed. It is printed on heavy slick stock, is slightly smaller than the pages of the magazine, and has been ideally preserved in Near Mint condition. The Saturday Evening Post cover artist J.F. Kiernan created the cover painting of Walter Johnson and the Mathewson premium artwork. This Baseball Magazine "Park Edition" is the very same example which appeared as Lot #495 in the famous 1999 Barry Halper auction, where it sold for $2,875 at that time, and has been consigned to this auction directly from the original purchaser at that sale. Reserve $1,000. Estimate $2,000/$3,000. SOLD FOR $2,185.00