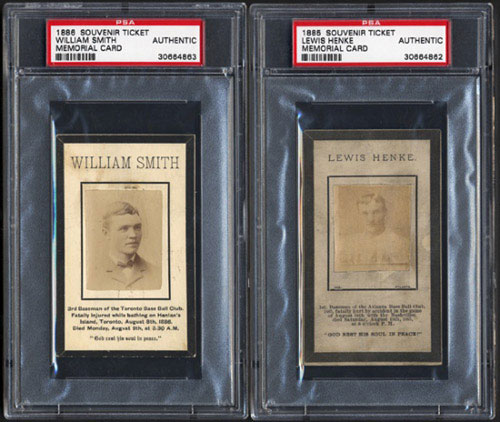 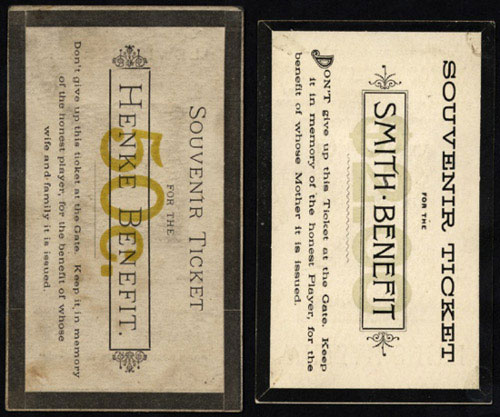 There are two nineteenth-century baseball memorial game benefit tickets known to exist. Both feature photographs of players whose early deaths relate to their professional baseball careers. Both were souvenirs of memorial games, organized to honor the memory of the then-recently deceased players, with the photographic tickets sold to raise funds for each player's family. Both of these tickets are the only known examples. Both of these tickets are included in this lot. These are the very examples which were featured in an article in the Sports Collectors Digest in 2003. These tickets also qualify as cards. While they did give the bearer the right to enter the game, they were issued specifically as souvenirs, and each has instructions to the purchaser, which read, "Don't give up this Ticket at the Gate. Keep it in memory of the honest Player, for the benefit of whose wife and family it is issued" (in the case of Smith "...whose Mother it is issued"). 1) Lewis Henke Benefit Ticket. Henke was first baseman with the league-leading Atlanta Club of the Southern League when he was involved in a fatal on-field collision in a game against Nashville. Henke was carried off the field as the game resumed, but passed away from his injuries the following day. This was the first on-field player fatality in the history of professional baseball. The Henke ticket cost 50 cents, with all proceeds going to the benefit of Henke's wife and family. The portrait of Henke has some fading, and the ticket has some light overall soiling, but retains square corners and has no creases. 2) William Smith Benefit Ticket. "3rd Baseman of the Toronto Base Ball Club. Fatally injured while bathing on Hanlan's Island, Toronto, August 8th, 1886. Died Monday, August 9th, at 3:30 A.M. God rest his soul in peace." The Smith ticket cost two dollars, with all proceeds going to the benefit of Smith's mother. The Smith Benefit Ticket is in Excellent to Mint condition. Both tickets are identical in card-style format and design. Two extraordinary nineteenth-century photographic benefit tickets, both the only known examples, miraculously united years ago by advanced collector extraordinaire David Fleishman, and offered in this auction together as a pair. Total two items. Reserve $1,500. Estimate $3,000/$5,000. SOLD FOR $1,725.00