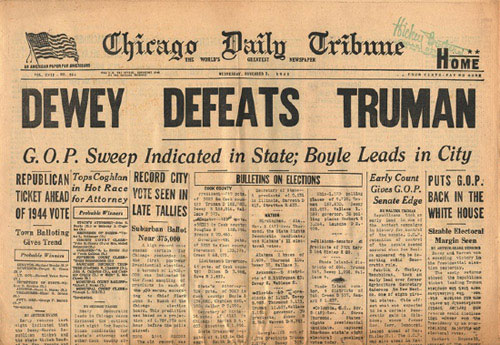 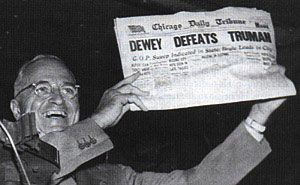 When one thinks of journalistic blunders none jump to mind quite as vividly as the November 3, 1948 infamous Chicago Daily Tribune headline: "Dewey Defeats Truman." Offered is a beautifully preserved, original full copy of that paper, which is forever immortalized in photographs of a triumphant Harry Truman holding it aloft at a victory press conference. Those photos were taken when someone handed Truman a copy of the paper while he was making an early morning appearance in the Chicago train yards. The Chicago Daily Tribune for Wednesday, November 3, 1948, was hurriedly cobbled together in the wee hours of the night following the closing of the polls on Tuesday, November 2, 1948. To be fair the Tribune was simply the most memorable victim of a prevailing media sentiment of the time, the reliance on statistically flawed polls to measure voter preference. Late returns from key states proved Truman the winner, but the Tribune , in the midst of a typesetter strike, rushed to print with the best estimate at that time. The apparent confusion and last-second production is evident in the far right-hand column on page one where several sentences are printed upside down. Truman had actually garnered 57% of the electoral vote (303 votes, carrying 28 states) with Dewey falling far short with but 35% of the electoral vote (189 votes, carrying 16 states). Realizing their mistake after delivery to newsstands, Tribune employees were dispatched to retrieve as many papers as possible. The historic headline is completely free of imperfections and the paper is as legible as it was on that fateful day in 1948. This is a fantastic tribute to political irony and newspaper infamy. The paper measures a standard 17 x 23 inches. The condition of this example is exceptional, with only light yellowing after over fifty years. This paper was obviously put aside in 1948 as a special keepsake of the election. The middle horizontal fold has some slight cracking as usual, but otherwise this historic newspaper issue is in Excellent condition. The masthead and 2-inch banner headline are clean, striking and free of imperfections. The top right bears the newsstand stamp from where the paper was originally purchased: "Hickey Brothers Cigar Store." There are many reprints of this paper. This is an original, and an exceptional high-grade example, ideal for framing and display. Reserve $500. Estimate $1,000/$2,000. SOLD FOR $1,392.00