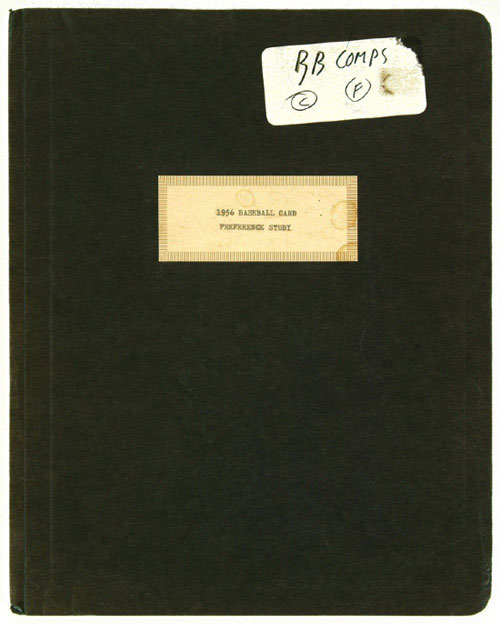 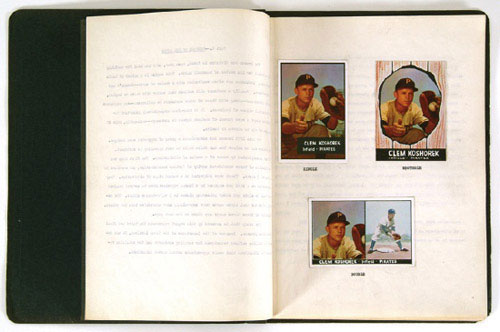 Three of the six 1956 Bowman baseball cards in existence are included in the offered 24-page 1956 Bowman Baseball Card Preference Study report. When Topps bought out Bowman in January 1956, their last baseball card set was, of course, the 1955 Bowman "Color T.V." series. Had Topps not bought Bowman, however, there would have been a 1956 Bowman Baseball series. Prior to being bought by Topps, Bowman had the wheels in motion to produce the 1956 Baseball set. Toward this end, Bowman contracted with a marketing company, the S. E. Zubrow Company, to determine the preferred design for the 1956 Bowman series. Representatives were sent out to the Major League cities of Chicago, New York, and Philadelphia to interview boys ages six to eleven, and to show them prototypes of potential card designs. Based on feedback from this research, three possible designs for the 1956 Bowman baseball set were chosen. Within the twenty-four pages of this top secret "1956 Baseball Card Preference Study" report are examples of the three final 1956 Bowman Baseball prototype cards. The cards are mounted together on page three of the typed report. Each features Pirates infielder Clem Koshorek. The first design closely resembled their landmark 1953 color photo set. The second was a "knothole" design which was obviously the inspiration for the 1958 Hires Root Beer set issued several years later. The third is a "double-photo" design, featuring a portrait on the left and action photo on the right, which served as the inspiration for the design of the 1957 Topps football set and also heavily influenced the design of the 1960 Topps baseball set. The Bowman preference study concluded that most kids preferred the double-photo prototype design, and recommends that Bowman utilize this format for the 1956 Bowman bubble-gum card series. The entire study, including processes and findings, is elaborately documented in the 24-page report, which is formally entitled "1956 Baseball Card Preference Study." Only two of these reports were made for Bowman, each including three prototype 1956 Bowman cards. The player featured in the offered report features Clem Koshorek, and the other features Dodgers outfielder George Shuba, so each 1956 Bowman prototype card is actually unique. The buyout of Bowman by Topps occurred before the set could be produced, and all of Bowman's records went to Topps. Plans for the 1956 Bowman set were entirely unknown in the collecting world until 1983 when the two Bowman reports were discovered in the personal files of Topps art director and hobby pioneer Woody Gelman, who had saved them as keepsakes of Bowman's final days. The 2003 Bowman "Heritage '56 Edition" set was based on the designs of the prototypes in this report. The prototype cards have been protected from all elements, including light, in the confines of the report, and are in Excellent to Mint condition. The cover shows just a little wear, with a sticker placed in the upper right with notes in Woody Gelman's hand which read "BB Comps." The interior pages are in Near Mint condition. This is an extraordinary treasure, one of the most important items that could possibly exist relating to the Bowman Gum Company, representing the final days of the company, and including three of the six 1956 Bowman cards in existence. Reserve $1,000. Estimate $2,000/$3,000. SOLD FOR $10,440.00