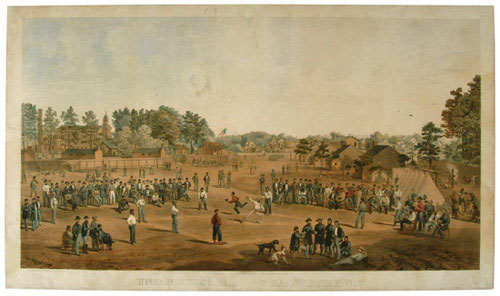 This magnificent full-color print (23.5 x 40.5) is universally recognized as the premier 1860s baseball lithograph as well as being one of the earliest color renditions featuring baseball as a subject. The striking illustration depicts Union prisoners playing baseball under Confederate guard in Salisbury, North Carolina. The print, published in 1863 by Goupil & Co., New York, from a lithograph by Sarony, Major & Knapp (449 Broadway, N. York) is titled "Union Prisoners at Salisbury, N.C." This is one of the most impressive and historically important of all baseball display pieces. There are probably no more than a dozen "Union Prisoners" prints known to exist. This is an exceptional example of what most advanced collectors consider to be the most significant of all nineteenth-century baseball lithographs. The print is of special historical significance in that the Civil War was largely responsible for the game of baseball spreading throughout the country. Thousands of soldiers learned to play baseball during the Civil War, and upon returning home, they introduced the game to friends and neighbors in their hometowns. In a very short period of time, the sport was played in every town in the land, soon earning the title "The National Pastime." The lithograph has been professionally cleaned and has had professional restoration to a few tears along the edges and in the background. "Union Prisoner" prints usually have substantial background staining due to chemical reactions between the paper of the print and the wood slats of the frames which traditionally house them. When cleaned, the colors will often fade to some extent. The colors on this example are particularly strong and vibrant. The margins have been ever so slightly cropped during framing long ago. There is some minor lightening and very minor loss of print to the lettering along the lower margin. The body of the print is remarkably clean and bright, with simply outstanding color and an overall Excellent appearance. The 1863 "Union Prisoners at Salisbury" print is one of baseball's most spectacular display pieces, and one of the few with a significance that transcends the world of sports collecting, being equally highly prized by collectors of Baseball, Americana, Civil War memorabilia and nineteenth-century lithography as well. Reserve $2,500. Estimate $5,000/$10,000. SOLD FOR $46,400.00