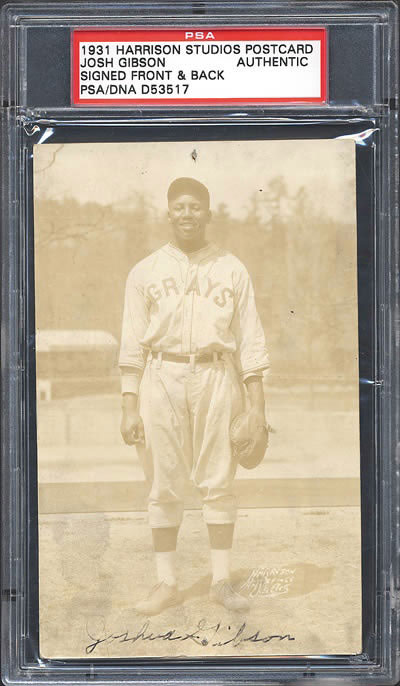 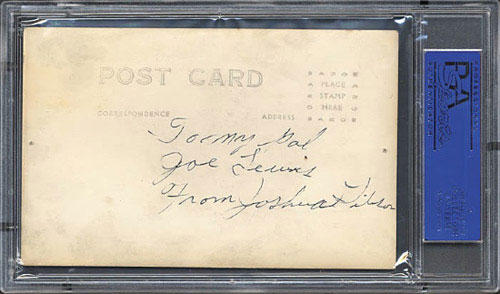 Real photo postcard of the legendary Josh Gibson in his first full season as a professional ballplayer with the Homestead Grays, signed on the front "Joshua Gibson" ("7"), also signed on the back "To my pal Joe Lewis From Joshua Gibson" ("7"), dating from spring training of 1931. This postcard is one of a series of Homestead Grays players produced during spring training of 1931 by Harrison Studios of Hot Springs, Arkansas. Several players from this set are known, as well as a team card of the Homestead Grays which is precisely dated by the photographer "4-3-31." All have traditional postcard backs. This is an extraordinary find both as a card and as an autographed photograph. Before we made others aware of the existence of this postcard, it was believed that no cards were ever produced of Josh Gibson picturing him alone dating from his playing days. This may be the only one. The fact that the postcard is autographed also makes this very possibly the only known signed photograph of Josh Gibson in existence (we know of no other, though we have seen at least one signed team photo with Gibson over the years). Josh Gibson is one of the rarest and most important of all Hall of Famer autographs. A signed photograph for some Hall of Famers is an ideal which in many cases simply does not exist. Prior to the discovery of this example, most collectors would have counted Josh Gibson among those Hall of Famer signatures impossible to obtain on a photograph. This photograph is all the more extraordinary in that it features Gibson as an eighteen-year-old in his rookie season. Josh Gibson actually joined the Homestead Grays in the middle of the 1930 season, and he left the Grays to join the Pittsburgh Crawfords early in 1932, when Crawfords owner (and top numbers racketeer) Gus Greenlee raided the Grays roster, signing both Josh Gibson and Oscar Charleston. This sequence combined with the photographer's credit ("Harrison, Hot Springs Arkansas" in white lettering in the lower right, as others in the series) also dates the postcard to spring training of 1931, as it could not be from spring training of 1930 (Gibson did not join the Grays until the middle of the season) and Gibson was already with the Pittsburgh Crawfords during spring training of 1932. Josh Gibson was the star of the 1931 Homestead Grays, considered by most historians to be the best black baseball team of all time. Playing as an independent team in 1931, the Homestead Grays are credited with a record of 163-23 against all levels of competition, and 1931 was the year in which Josh Gibson is credited with hitting a record 75 home runs. This signed postcard has never before been seen in the organized collecting world; however Robert Edward Auctions has known about this piece for many years. In 1995, REA handled a significant collection of Negro League materials including photographs from the collection of Louis Santop, one of the greats of the Negro Leagues. When we auctioned this collection, included were several autographed postcards (two with salutations, one personalized to "Lewis"), including two signed Homestead Grays postcards from the 1931 Harrison Studios Hot Springs, Arkansas, set. These appeared as Lot 639 in the June 1995 REA auction. When these signed postcards (along with several other significant photographic pieces) were consigned, there was one postcard that the consignor chose to keep. That postcard was the signed Josh Gibson. After over a decade since the sale of this collection, we are extremely pleased to be able to offer this card, the prize of the collection, the signed Josh Gibson card. The "Joe Lewis" in the salutation is almost certainly Joseph Herman (Sleepy) Lewis, who was a star catcher in the Negro Leagues from 1919 to 1936 with many teams including the Baltimore Black Sox, Washington Potomacs, Hilldale, and the Lincoln Giants. It is interesting to note that Santop, Gibson, and Lewis were all star catchers, and this fact no doubt relates to why this signed postcard happened to come into the possession of and be saved by Santop. The card has no creases. A small area of very light discoloration in the lower left has the look of light soiling but appears to be as-made. The card has two small, clean pinholes: one at top center above Gibson's image and another at the bottom center which goes through the bottom loop of the "G" in "Gibson," an undetectable hint of adhesive removal in the corners of the reverse (the card was mounted in a frame and professionally removed); the card is otherwise in Vg-Ex/Ex condition. LOAs from James Spence/JSA and Steve Grad, Mike Gutierrez & Zach Rullo/PSA DNA. Reserve $5,000. Estimate $10,000/$20,000+. SOLD FOR $81,200.00