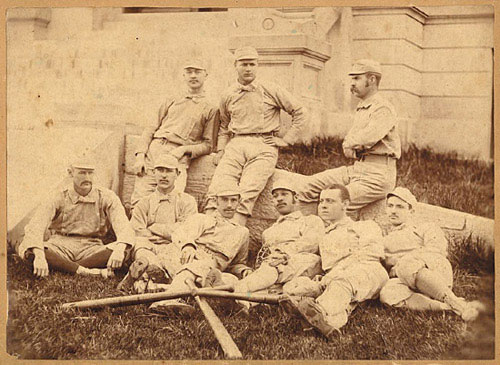 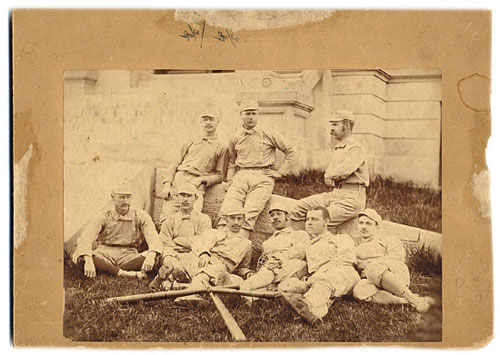 Exceedingly rare and significant team cabinet photo of the 1882 University of Michigan baseball team including Moses Fleetwood Walker, the first black ballplayer in Major League history. This original cabinet photo predates Walker's Major League debut by two years and pictures the star catcher seated on the ground, third from the right, with his catcher's mask resting on his knee. In addition to breaking the color barrier in Major League baseball, Walker was also the first black athlete to play for the University of Michigan. Walker's collegiate baseball career actually began in 1881 at Oberlin College, an integrated institution. Although he enrolled at the school in 1879, they did not form an intercollegiate baseball team until his third year. Following the 1881 season Walker was openly recruited by the members of the Michigan baseball team (a common practice at the time) and he eventually left Oberlin to enroll in Michigan's law school. Walker was the star of the team in 1882 and helped lead Michigan to the championship of the newly formed Western Baseball League, the second-ever collegiate athletic league and the predecessor to the Big Ten. Written accounts from The Chronicle , the Michigan student newspaper at the time, attest to Walker's abilities on the diamond. Following an early loss in April to a professional club from Detroit the paper rendered this opinion: " Many doubts had been expressed previous to the game, as to the strength of our nine, but they are now all dissipated. Walker, as catcher, did some of the finest work behind the bat that has ever been witnessed in Ann Arbor. " A later entry, dated May 27, 1882, reported Walker's exploits in a win against Wisconsin: " Walker's catching cannot be too highly commended, and the general verdict is, that the man is a wonder... With two men out and two on bases, Walker came to the bat. With two strikes called and the crowd in great suspense, the 'wonder' struck the ball square in the face for the most beautiful home run seen on the grounds this year. " Following that banner season, Walker left college to pursue a career in professional baseball. In 1883 he signed with the Toledo Blue Stockings, a team in the Northwestern League. The following season, Toledo joined the American Association, a Major League that formed in 1882 as a rival to the National League. Thus, with Toledo's entry into the American Association, Walker became the first black player in Major League history. Later in the year, his brother Weldy also joined the club. The following season the Toledo club folded due to financial problems, thereby ending the Major League careers of both Walker and his brother. They would remain the only black players in Major League history until Jackie Robinson debuted with the Dodgers in 1947. Walker continued to play ball in a number of integrated minor leagues over the next few years; however, the overt racism of the time, by both fans and players, soon led to the abolition of integration in organized baseball. The most important event leading to the ban on black ballplayers in organized baseball occurred on July 14, 1887 and involved Walker. On that date the Chicago White Stockings, managed by Cap Anson, were scheduled to play an exhibition game against Newark, whose members included Walker and another black player named George Stovey. Anson, baseball's reigning superstar at the time as well as an affirmed racist, would not allow his team to take the field unless Walker and Stovey were removed from the lineup. Anson's influence at the time was so great that his demands were quickly met by the Newark club. On that same night, perhaps galvanized by Anson's defiant stance, team owners voted to adopt a new resolution that would ban the signing of any new black ballplayers. The short-lived era of integration had ended. Organized baseball's "Gentleman's Agreement" to not allow black ballplayers to play in the same leagues as white ballplayers evolved overnight into an accepted formal policy, supported by the most powerful ruling forces of organized baseball. Walker, who left the league in 1889, would be the last black player to play in the International League until 1946. This is an extraordinary museum-quality display photograph. We believe there are fewer than twenty original photographs known of Moses Fleetwood Walker, perhaps as few as a dozen. The photo has superb contrast. The cardboard mount (11.25 x 8.5 inches) is very plain and has numerous flaws, all of which can easily be matted out, which relate to its previous display. The actual mounted photograph (8.75 x 6.5 inches) has a minor two-inch diagonal crease in the lower right, and is otherwise in Excellent condition. Reserve $500. Estimate $1,000/$2,000. SOLD FOR $6,380.00