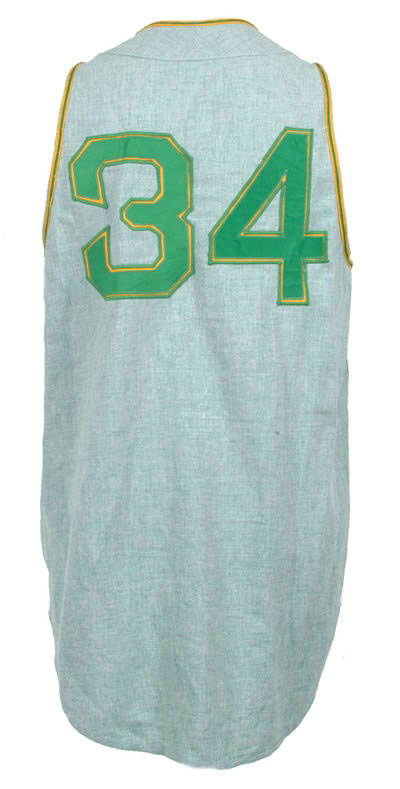 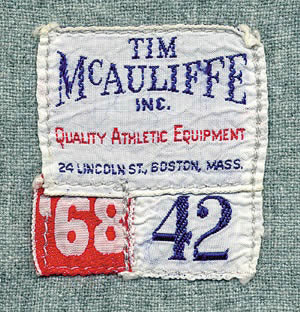 Extremely rare one-year-only style jersey employed by the Oakland Aâ€™s in 1968. The mint-green flannel jersey, which was used as an alternate jersey (road and home), is lettered â€œOaklandâ€ across the front and features the number â€œ34â€ on the reverse. The front letters are appliquÃ©d in an embroidered color pattern of green-on-gold-on-green. The reverse numerals are appliquÃ©d in green on gold tackle twill, with a green embroidered trim. Situated on the left front tail are a â€œMcAuliffeâ€ label, a â€œâ€™68â€ year tag and a â€œ42â€ size tag. The jersey is completely original, with no alterations, and displays minimal wear. This garment originates from the famed Barry Halper Collection. One of Barryâ€™s goals was, whenever possible, to have every jersey in his collection signed by the respective player. With that thought in mind he had Hall of Fame reliever Rollie Fingers sign this jersey in blue Sharpie (â€œ9â€) in the collar. At the time, Barry believed this to be Rollie Fingersâ€™ rookie jersey. Barry later discovered that Fingers, who wore number â€œ34â€ with the Aâ€™s from 1969 through 1976, actually wore number â€œ32â€ in 1968. While it is possible that Fingers wore this jersey in spring training of 1969 (when it was common practice to wear the previous yearâ€™s jerseys during training camp), no accompanying documentation supports that speculation. No roster player wore number â€œ34â€ in 1968; therefore this was most likely used as an extra jersey that season. Regardless, it remains an outstanding and rare one-year â€œstyleâ€ jersey worn by the Aâ€™s only in 1968. From the Barry Halper Collection. LOAs from Dave Bushing & Troy Kinunen/MEARS and James Spence/JSA. Reserve $200. Estimate $400/$600. SOLD FOR $1,175.00