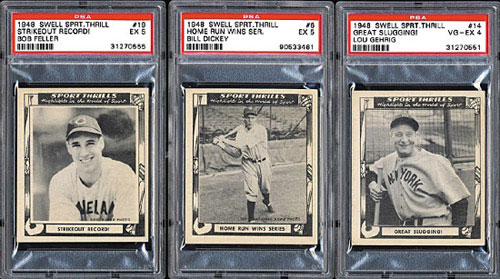 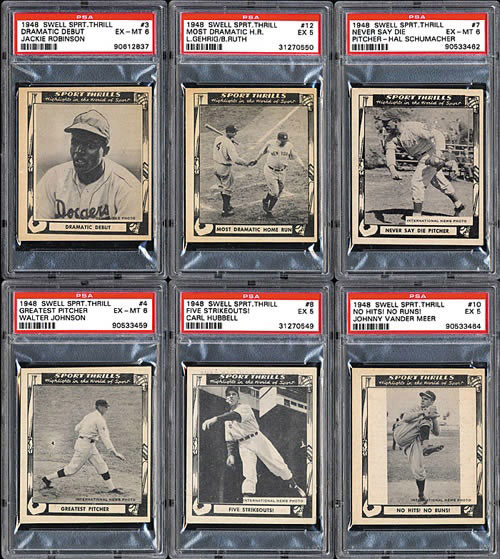 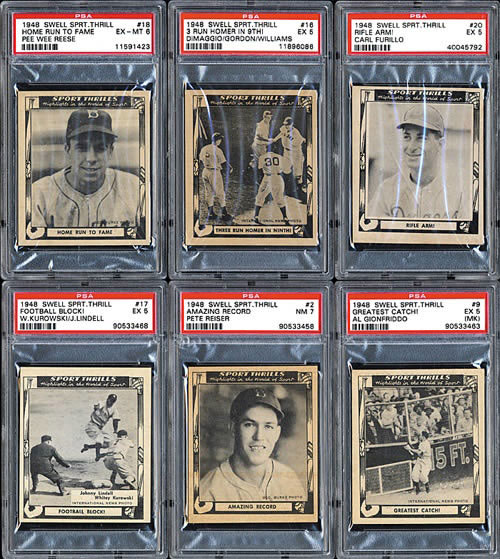 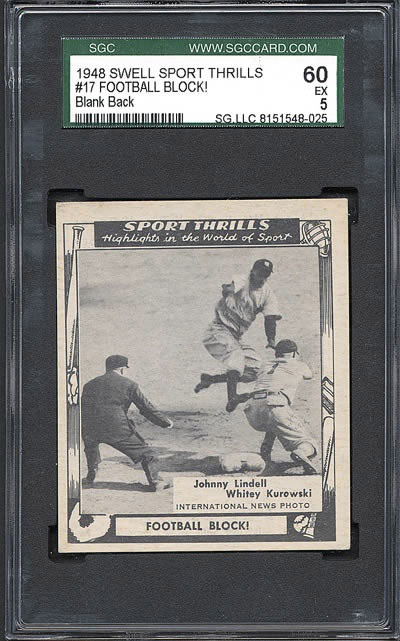 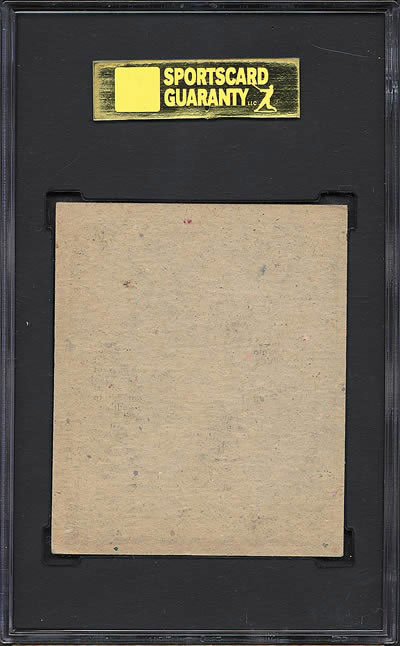 Complete set of 1948 Swell Sports Thrills cards, entirely graded by PSA. This very scarce and unusual 20-card set was issued by the Swell Gum Company of Philadelphia. Each of the card fronts feature black-and-white photos of a great event in baseball history, accompanied by a story on the reverse. Represented are a mixture of old timers (such as Babe Ruth and Lou Gehrig) and then-current stars (such as Joe DiMaggio and Ted Williams). The offered set is one of only two completely graded sets on the PSA registry, with a weighted GPA of 5.02. The PSA grades are as follows: One NM 7: #2 Reiser (highest-graded example). Four EX-MT 6: #3 Robinson (only one graded higher), 4 Johnson, 7 Schumacher (highest-graded example), and 18 Reese (only one graded higher). Thirteen EX 5: #1 Cochrane/Foxx, 6 Dickey, 8 Hubbell, 9 Gionfriddo (MK), 10 Vander Meer, 11 Lazzeri, 12 Gehrig/Ruth, 13 Cochrane/Goslin (highest-graded example), 15 Bagby/Smith, 16 DiMaggio/Williams, 17 Kurowski/Lindell, 19 Feller, and 20 Furillo. One VG-EX 4: #14 Gehrig. One VG 3: #5 Henrich/Owen (only one graded higher). As referenced throughout the condition composite, many of these cards are the highest- or second-highest graded examples in the PSA Population Report. This is a remarkably crisp high-grade set of this extremely overlooked and fascinating gum-card issue, with all of the key cards in the set particularly strong. This set features many of the most memorable events in baseball history. Perhaps because it is not a part of a series of sets, such as Topps and Bowman, this very scarce issue simply has never been â€œon the radarâ€ of most postwar gum-card collectors. Few vintage sets are more substantial and interesting, yet have received less attention from collectors than the 1948 Swell Sport Thrills set. Also included is a very unusual, possibly unique, blank-backed example of card #17 (SGC EX 60). Total 21 cards (complete set of 20 and one variation). Reserve $500. Estimate (open). SOLD FOR $3,525.00