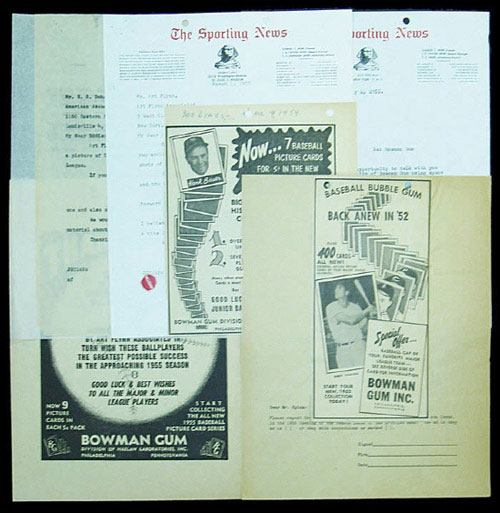 Fascinating small archive of Bowman Gum related correspondence from the files of very prominent early baseball business agent and player representative Art Flynn. 1-2) letter from The Sporting News to Flynn, dated May 4, 1955, concerning Bowman advertising, and referring to an enclosed tearsheet of a 1954 Bowman Gum ad. The tearsheet (6.5 x 8 inches) accompanies. It features an image of a card of Hank Bauer with a card design never used by Bowman, and is dated June 9, 1954. It is interesting to note the ad states the set includes over 400 Major Leaguers â€œunder exclusive contract.â€ 3-5) A second letter from The Sporting News to Flynn, dated March 1, 1955, is the cover letter that accompanied the photographs of umpires supplied for use in the 1955 Bowman set, which are â€œenclosed herewith â€“ choice shots of all but Stan Landes.â€ The letter explains that they were still trying to get a photo of umpire Landes and had written Eddie Doherty of the American Association. A file copy of the letter sent to Doherty also accompanies. The Sporting News was apparently not successful in getting this last photo to Flynn for Bowman, as Landes is not one of the thirty-one umpires that appear in the 1955 Bowman set. The number thirty-one is an unusual number for any formal card subset. This letter suggests that the number was originally intended to be thirty-two. It is interesting to note that the cover letter does not have mailing folds, which makes sense as it was sent to Flynn with the umpire photos for Bowman. The letter closes with a reference â€œthe enclosed proof of the Bowman Gum adâ€ for review. The Bowman advertising proof (8 x 11.5 inches) accompanies. 6) Also included is a 1952 Bowman advertising tear sheet (4 x 8.5 inches mounted on 8.5 x 11-inch form) featuring an ad for the 1952 set with the headline â€œBack Anew in â€™52,â€ picturing a card of Bobby Thomson with a design different from that used in 1952, advertising â€œOver 400 cards all new! Start your new, 1952 collection today!â€ 7) The final item is a March 11, 1955 file-copy letter to The Sporting News referring to a Bowman ad that ran dark when published, and that had been redone to eliminate shading. All items have two filing punch holes at top, and are otherwise Vg-Ex to Ex-Mt. This is a very interesting group of unique Bowman-related correspondence. Total 7 items. Reserve $100. Estimate $200/$300.