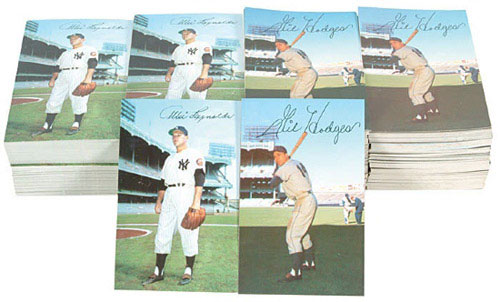 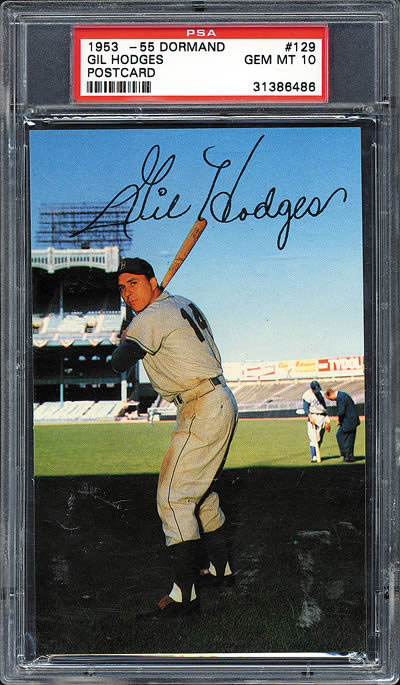 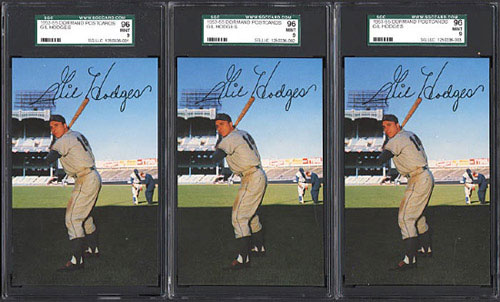 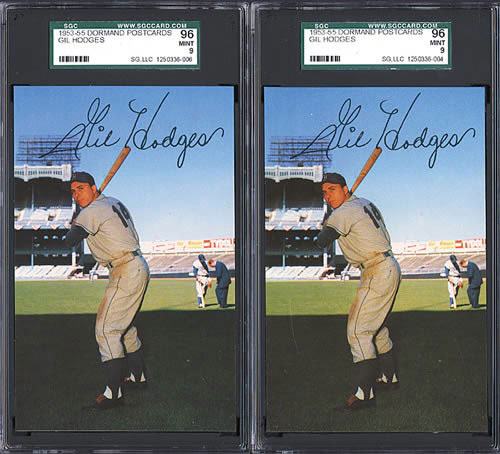 This incredible collection of 1953-1955 Dormand postcards is comprised of approximately 750 Gil Hodges cards and 1,000 Allie Reynolds cards, for a total of approximately 1,750 cards (some cards are still in "bricks" and our count thus may be conservative by several cards for each player). Although the enormous quantities offered here represent a substantial find for both players, the Hodges card is of particular note. The 1955 Dormand Postcard of Gil Hodges has been revered as one of the legendary rarities of card collecting since the earliest days of organized collecting. This is a card which was so rare that in the 1960s and 1970s it was widely considered to be the premier regional card rarity of the 1950s, and was spoken of with the same degree of respect reserved for other famous rarities such as Wagner, Plank, and Lajoie. In the 1970s, advanced collectors placed a greater emphasis on rare regional issues than in today's market, and no key regional card was rarer than Gil Hodges from the Dormand Postcard set. The existence of this hoard is directly related to the great rarity of Hodges from the Dormand set in years past. Dormand postcards were produced by photographer Louis Dormand by special order for selected players from several teams, including the Yankees and Dodgers, and were specifically intended to help players honor fan requests for photos and autographs. When Gil Hodges ordered his cards, he failed to arrange to have the cards picked up or delivered from Dormand, hence the extreme rarity of his card. The offered postcards of Hodges, as well as those of Allie Reynolds, were discovered in recent years by the Dormand family in the basement of Louis Dormand's home in Long Island, New York, where they had been stored undisturbed for the past fifty years. In spring 2006, Robert Edward Auctions presented a very large group of Gil Hodges Dormand postcards from that historic find. That collection of 697 postcards, which appeared as Lot 400 in our April sale, was unprecedented in its quantity at the time. The offered group, with the exception of a few examples kept by the consignor as souvenirs, represents the entire remaining balance of unsold Hodges cards and Reynolds cards purchased from the Dormand family.

Approximately 500 of the 750 Gil Hodges cards range in grade from Ex to Near Mint, averaging Ex-Mt. The other 250 cards display a number of minor flaws, including staining and light creasing, and range in grade from Gd to Vg. The approximately 1,000 Allie Reynolds cards are in overall Nr-Mt condition (many in Mint), with about 10% in lesser grades. According to the 2007 Standard Catalog of Baseball Cards these 1,750 postcards, in Nr-Mt condition, have a total book value of $101,250 (Hodges lists for $75, down from $275 in the 2005 catalog, and Reynolds lists for $25). PSA now has holders which allow for grading of Dormand Postcards. While there is no guarantee that any given card will grade a â€œ9â€ or a â€œ10,â€ or even be accepted for grading, we would be surprised if the majority of the offered cards did not qualify for grades ranging from â€œ6â€ to â€œ10.â€ Included are five SGC-graded MINT 96 examples and one PSA-graded GEM MINT 10 card of Hodges. Total approximately 1750 cards. Reserve $1,000. Estimate (open). SOLD FOR $2,937.50