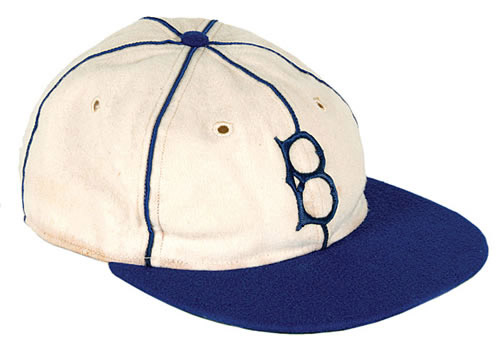 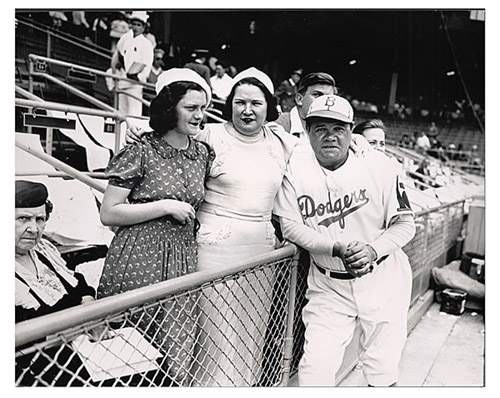 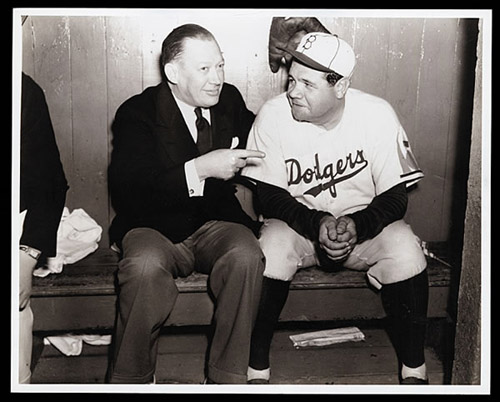 While most fans are probably aware that Babe Ruth ended his playing career in 1935 as a member of the Boston Braves, many may be surprised to learn that it did not mark his final season in a Major League uniform. That event occurred three years later, in 1938, when he briefly served as a first-base coach with the Brooklyn Dodgers. Offered here is a Brooklyn Dodgers home cap worn by Babe Ruth during his short coaching tenure with the club in 1938. The rare, one-year-only style white cap features six blue stripes and a blue embroidered "B" on the front. Both the name "Babe Ruth" and the size, "7 3/8," are embroidered in green stitching along the leather headband. A "Spalding" label also appears in the headband. This hat originates from the famed Barry Halper Collection. Barry's collection also included Ruth's full Brooklyn Dodger's home coaching uniform, which originally went with the cap. This particular garment is of special significance in that it not only represents the final chapter in Ruth's Major League career but also the close of his hope to be a Major League manager. Although Ruth openly campaigned for a managerial position in the years immediately following his retirement as a player, offers were not forthcoming. Ruth felt particularly slighted that the Yankees had not given him an opportunity to manage. His only official association with any club following his 1935 retirement as a player came on June 19, 1938, when he was hired as the Brooklyn Dodgers' first-base coach by general manager Larry MacPhail. Ruth took the job with the explicit understanding that he would be given an opportunity to eventually take over for then-manager Burleigh Grimes. Unfortunately, the Dodgers were less than truthful with him. Whereas Ruth thought he was being groomed for the manager's job, the Dodgers looked upon him strictly as a drawing card. Right from the start Ruth was ordered by management to put on pregame "home run displays" and stay late to sign autographs for fans. To his chagrin, Ruth quickly realized that he had been duped once again. (The Braves, in 1935, also signed Ruth with the false promise of a future managerial position.) Ruth had no interest in being a sideshow attraction; he wanted to be manager. Disgusted with the situation, he left the Dodgers at season's end. Unfortunately, his dream of becoming a manager never came to fruition; thus his Major League career came to an official close with the Dodgers at the end of the 1938 season. The hat displays light wear, including minor perspiration stains along the interior, and is otherwise in Near Mint condition. MEARS has examined the cap and deemed it "Authentic" (MEARS does not grade caps). The cap is accompanied by two non-vintage black-and-white photos (each 10 x 8 inches) of Ruth as a coach with the Dodgers in which he is shown wearing an identical-style cap (possibly this very one). The first of these photos, both of which are perfect for display with the cap, pictures Ruth sitting in the dugout with Larry MacPhail, while the second captures him standing next to the grandstand as he poses with his wife and daughter. This is an extraordinary personal item of great significance marking the end of the career of baseball's greatest legend. LOA from Dave Bushing & Troy Kinunen/MEARS. Reserve $5,000. Estimate $10,000+. SOLD FOR $70,500.00