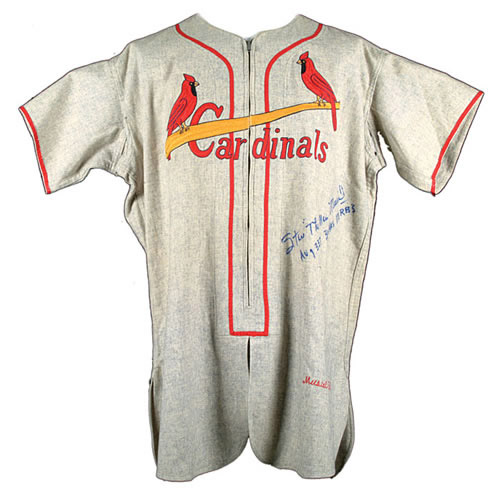 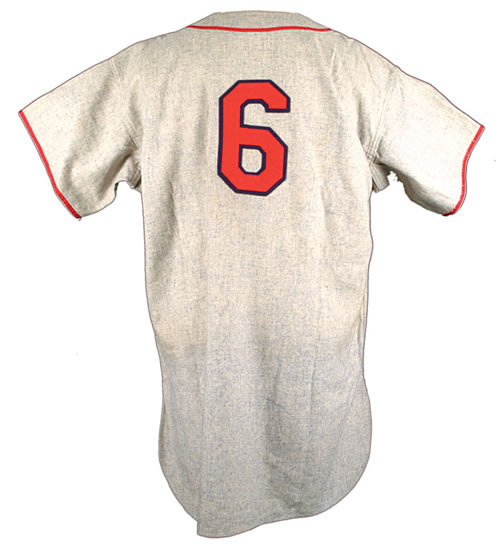 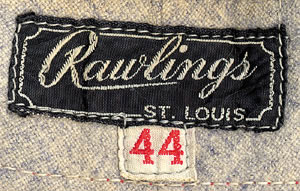 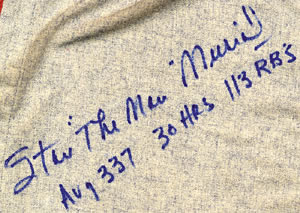 Presented is one of the finest Stan Musial jerseys in existence: a St. Louis Cardinals flannel road jersey worn by the Hall of Fame outfielder in 1953 that has been graded a perfect A10 by MEARS. This is a simply extraordinary 1950s Hall of Fame jersey on many counts, including the stature of the player (and Stan Musial may be one of the most underrated of baseball's great legends), the significance of the year, and the rarity and beauty of the jersey style. The gray zipper-front jersey features the team name "Cardinals" embroidered on the front, above which is displayed the club's distinctive logo of two cardinals perched upon a bat. The number "6" is appliquÃ©d on the reverse in red on navy felt. Both the name, "Musial," and the year, "53," are chain-stitched in red along the left front tail. Situated in the collar are a "Rawlings" label and an adjacent "44" size tag. Musial has inscribed the jersey, "Stan 'The Man' Musial" in blue Sharpie (grading "9") on the front, below which he has added his batting statistics for 1953, "Avg 337 30 HRs 113 RB's." The jersey is completely original, with no alterations, and displays moderate wear throughout. As noted by him on the jersey, 1953 was a banner year for Musial. In addition to the gaudy numbers already mentioned, Musial also led the National League in on-base percentage (.437), bases on balls (105), and doubles (53). This is one of only two Stan Musial jerseys graded A10 by MEARS (the other is a 1962 Cardinals home jersey) and one of only four St. Louis Cardinals flannel jerseys graded A10 by MEARS (the other three are a 1955 Ken Boyer home jersey, which, coincidentally, is also featured in this auction and is from the same collection, the aforementioned 1962 Stan Musial home jersey, and a 1964 Pepper Martin Old Timer's Day jersey). Stan Musial game jerseys are exceedingly rare and seldom, if ever, seen at public auction, especially high-grade examples. This particular jersey has been in the possession of an advanced collector for many years and was the highlight of his extensive lifelong collection of Musial memorabilia, almost all of which is presented in this auction. We don't remember ever seeing a finer Musial game jersey, and probably never will. Perfect in all respects. LOAs from Dave Bushing & Troy Kinunen/MEARS and James Spence/JSA. Reserve $5,000. Estimate $10,000/$20,000. SOLD FOR $44,062.50