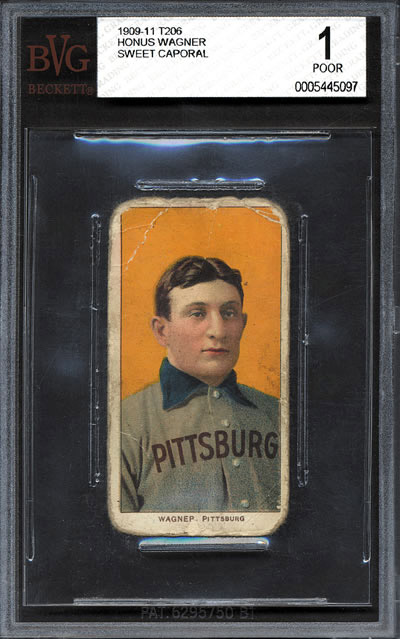 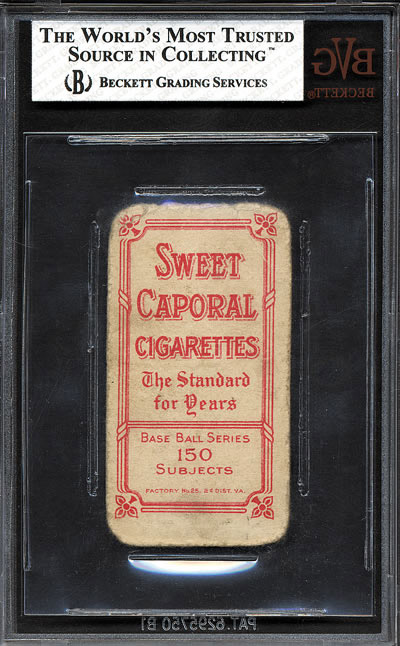 Presented is an outstanding newly discovered example of the "Holy Grail" of baseball cards: The T206 Honus Wagner. Graded 1 POOR by BVG. This is an extremely attractive low-grade T206 Honus Wagner, with edge and corner wear and a few creases, but with extremely bright, bold colors, and perfect registration. No one is ever going to confuse this card with the famous Gretzky-McNall Wagner, but this card needs to make no apologies for its appearance. This is a very strong Wagner for a low-grade example, with a bold portrait image offset by a particularly strong, bright orange background, a boldly printed reverse, very clean, both front and back, and with no heavy creases disturbing the portrait image. This card is accurately graded but there is a lot more to evaluating a Wagner card than a numerical grade. Most Wagners are in low grade. This card has something that many other Wagner's do not: eye appeal. It also has a great story and provenance: This card was among the new find of 546 T206 cards which the owner, a noncollector, had brought into Beckett Grading Services' Dallas headquarters in December 2007. Since the owner wishes to remain anonymous, this exciting collection has come to be known as "The Beckett T206 Find." The cards had originally belonged to the grandfather of the current owner. The owner had inherited the cards from his father twenty years ago, who had in turn had inherited the collection from his father fifteen years prior. He was searching his house for things to sell, as he had fallen on hard times, when he remembered his grandfather's baseball cards, which had been stored in a box in the attic of his home, untouched for decades. Throughout all these years, no one in the family had given the cards any thought, especially with reference to value, and they remained all but forgotten. After the cards were submitted for authentication and grading, Beckett Grading Services immediately made him very aware of the great significance and value of the find. The owner then requested Beckett Select Auctions' assistance in selling the collection at auction. It is an honor and a privilege for Robert Edward Auctions to have been chosen by Beckett Select and the consignor to present the T206 Wagner and the entire "Beckett T206" find in this auction. It is always exciting when a new T206 find is uncovered, but the discovery of a new T206 Wagner is an extremely rare event, especially at this late date after all the publicity that the card has received for so many decades. There hasn't been a new Wagner discovered in years. This really is the ultimate baseball card story: that someone should be looking through their attic to find old things to sell, find a box of baseball cards, and learn that it includes a newly discovered example of card collecting's greatest treasure. It just doesn't happen. But it happened here, and it is very exciting for Robert Edward Auctions to be a part of it. The Wagner card, like all the cards in the collection, has an advertisement for Sweet Caporal Cigarettes on the back. Sweet Caporal was clearly the grandfather's brand of choice, and it is very fortunate that this was the case, as all but two or three of the approximately fifty known examples of the T206 Wagner have a Sweet Caporal back. Over the years, one market trend is clear: The T206 Wagner card, even in the lowest grades, has always continued to climb in value over time. In fact, it may be more accurate to say that lower-grade Wagners have appreciated at a faster rate than higher-grade examples. There has always been an extremely strong demand for low-grade Wagners. Most Wagners in existence are in low grade, so the demand for low-grade Wagners is due in part simply to the fact that there is little in the way of higher grade choices to consider. According to the PSA population report, for example, twenty of the twenty-six T206 Wagners ever graded by PSA are graded a PSA 1 or a PSA 2 (ten examples at each grade), with just six examples graded higher (3 Vg, 1 Vg-Ex, 1 Ex, and the Gretzky-McNall PSA 8). It is also the case that collectors are willing to be very flexible on the condition of a Wagner. Of course, the better the condition, the more valuable a Wagner will be to collectors who can afford it. But more collectors can afford a low-grade Wagner than a high-grade Wagner. Because more people can afford a low-grade example, it's easier to sell, if the need arises. A low-grade Wagner, therefore, has much greater liquidity, which is a very desirable quality for any commodity or store of value. The challenge, then, for most card collectors interested in a Wagner, is not just to find a low-grade Wagner, which is hard enough, but to find an attractive low-grade Wagner. "The Beckett Wagner" is a tremendous low-grade example of the T206 Wagner, one that compares very favorably with most other low-grade examples, and which is simply a great-looking card that elicits a positive response from everyone who sees it. The colors on this card are noticeably brighter, fresher, and bolder than most other T206 Wagners, including examples that are graded much higher. This is very likely due to the fact that this card has been stored away in ideal conditions, literally untouched and protected from all elements including light, for decades. Some cards have flaws that make collectors respond less than positively, and upon viewing make them say to themselves "That one's not for me" or "If only it were in better shape." This is a card that collectors will always hold and look at in awe, and say simply, "Wow, it's a Wagner, and it's a great looking card!" We all know that beauty is in the eye of the beholder. Every card is different. To most collectors, and to us, this is a beautiful card! Reserve $50,000. Estimate $100,000+. SOLD FOR $317,250.00