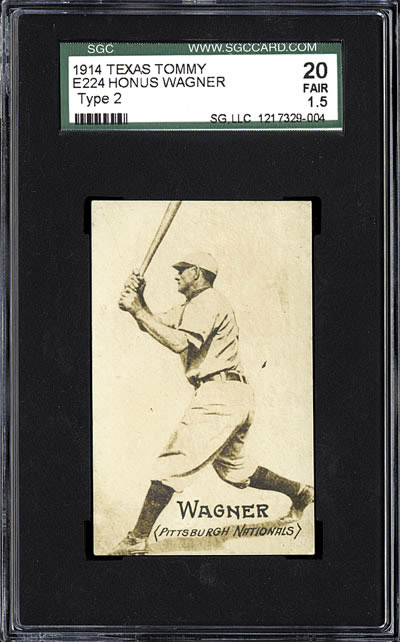 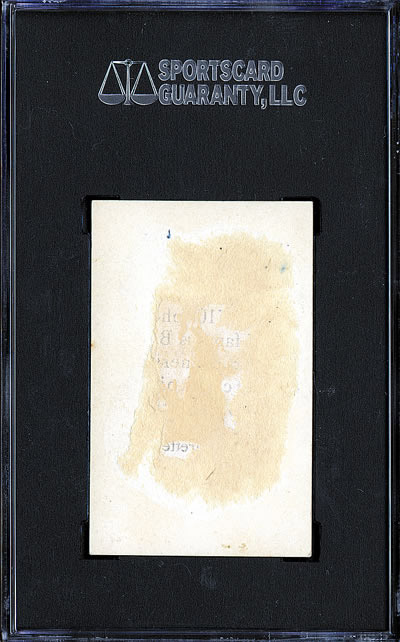 Incredibly rare Texas Tommy Type 2 of Honus Wagner, of the "Pittsburgh Nationals." It is almost impossible to find even a common player sample card from this issue, let alone a major Hall of Famer. An example from Texas Tommy Type 2 is missing from almost every advanced sample card collection. In more than thirtyfive years, we have had literally only a handful of cards from this set. This is the first Honus Wagner we have seen. Wagner, of course, has great appeal as one of the most legendary players of all time, one of the first five Hall of Famers, and also because of the great fame of his T206 tobacco card (this candy card is, ironically, many times rarer). Little is known about the product with which Texas Tommys were issued, but it is believed by Jefferson Burdick to have been a candy issue. Type 1 cards have printing, including advertising, on their reverses. Type 2 cards are slightly smaller (1.875 x 3 inches), are printed on far superior stock, with glossy finish (as opposed to Type 1 cards which are lower quality "flat" printing), and have blank backs. The Honus Wagner card is also one of only two Texas Tommy Type 2 cards known which feature an image which is different than its Type 1 counterpart, giving this card a very special distinction among both Texas Tommys and rare Honus Wagner cards. In fact, we believe the photo used on this card is unique to this set. While the card has been graded FAIR 20 by SGC, it is immediately obvious upon viewing that this extraordinary example appears to be in strong Excellent to Mint condition. The card was long ago mounted in an album, and was later carefully removed. The blank reverse has evidence of paper remnants, which was the sole basis for SGC's downgrading of the card. Aside from this minor flaw, the card is in solid Excellent to Mint condition. Bright, perfectly clean and crisp, with sharp corners. We estimate that fewer than five examples of 1914 Texas Tommy Type 2 Honus Wagners are known to exist. This is the finest example in the world (at least that we know of) of one of the rarest of all Honus Wagner cards, and one of the finest samples known of any player from this extremely rare "E" card set. Reserve $2,500. Estimate $5,000+. SOLD FOR $16,450.00