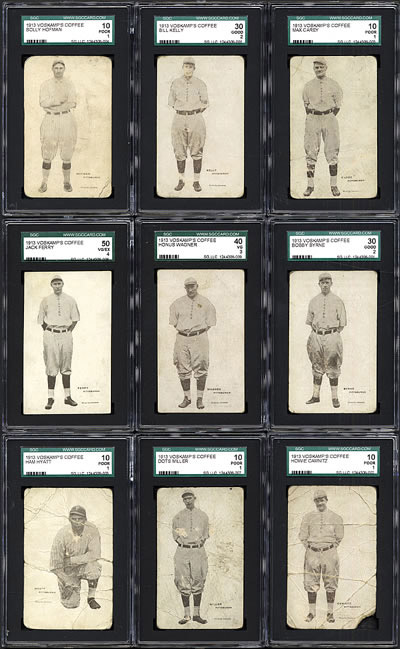 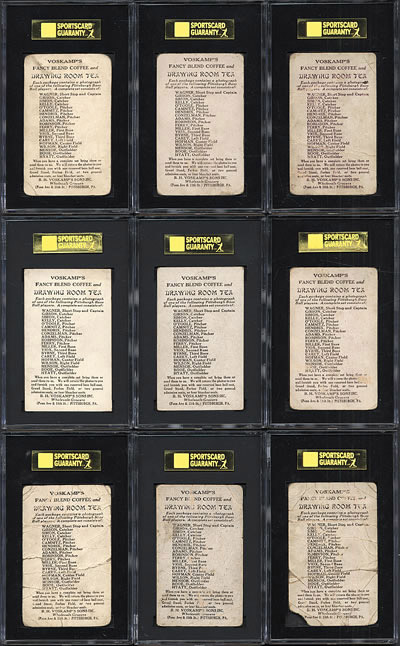 Presented is an extraordinary collection of 1913 Voskamp's Coffee: nine different of the twenty cards in the set, highlighted by Honus Wagner, all graded by SGC. This extremely rare twenty-card set was regionally issued in the Pittsburgh area by B. H. Voskamp's Sons Inc., one card per package of coffee or tea. Each card (2-1/4 x 3-5/8 inches) features a distinctive black-and-white full-length image of a member of the Pittsburgh Pirates set against a plain white background. Even sample cards from this set are extremely rare. To the best of our knowledge no complete sets of Voskamp's Coffee cards have ever been assembled by modern day collectors. (Presumably some collectors were able to put the set together in 1913, but to the best of our knowledge, no complete sets survive.) The photographs used are unique to this set. These nine cards are part of a newly discovered collection of ten Voskamp's Coffee cards which was saved for decades by the daughter of the original owner, who gave them to her in the 1940s. The one duplicate, a second example of key card Honus Wagner, is offered separately in this auction as its own lot. The entire collection has been graded and encapsulated by SGC. The reverse of each card has advertising for Voskamp's Coffee and Tea, a complete checklist for the set, and details of a ticket redemption program which reads: When you have a complete set bring them or send them to us. We will return the photos to you and furnish you with one reserved base ball seat, Grand Stand, Forbes Field, or two general admission seats, or four bleacher seats. The SGC condition report is as follows: One VG/EX 50: Jack Ferry. One VG 40: Honus Wagner (HOF). Two GOOD 30: Bobby Byrne and Bill Kelly. Five POOR 10: Howie Camnitz, Max Carey (HOF), Solly Hofman, Ham Hyatt, and Dots Miller. Though the cards in this collection vary in grade, and several cards might qualify only as "fillers" to some collectors (Camnitz, Hyatt, and Miller), others are reasonably strong with great eye-appeal. Ferry, in particular, is a high-grade example, and key card Honus Wagner, while nowhere near as strong as the duplicate example offered individually, is a very pleasing example and an extremely significant highlight. Note: We grade this card slightly lesser than SGC at Good to Very Good. This is an amazing collection of these extremely distinctive and rare regional cards featuring members of the 1913 Pittsburgh Pirates, and a unique opportunity to acquire nine different cards from one of the rarest of all 1910-era issues. Total 9 cards. Reserve $3,000. Estimate (open). SOLD FOR $26,437.50