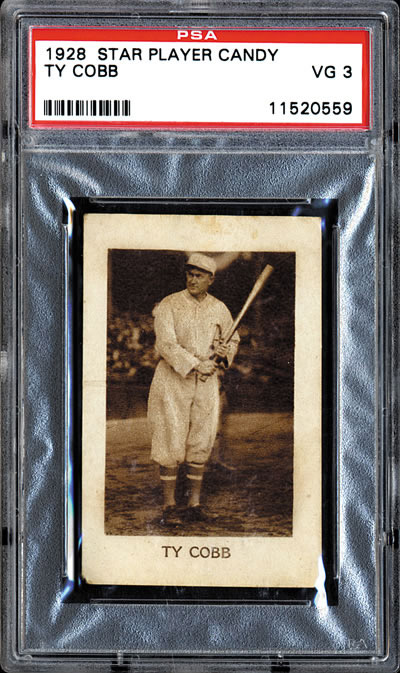 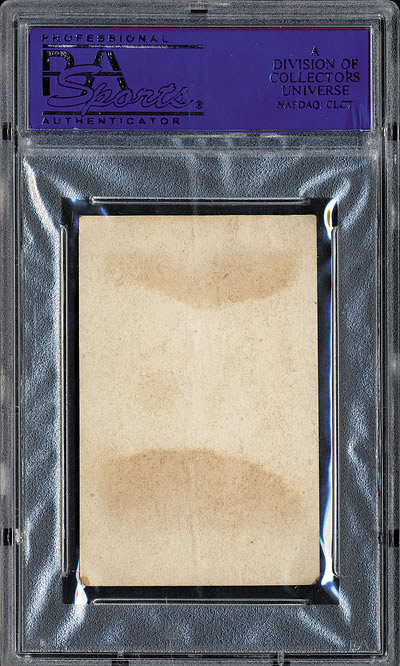 Graded VG 3 by PSA. This is the highest-graded example of the only two 1928 "Star Candy" Ty Cobbs ever graded by PSA. Extremely rare candy card of Ty Cobb from one of the few issues dating from the late 1920s. This is a particularly exciting Cobb card, not just because it is one of the key cards to the rare 1928 Star Candy set, which it is, but because this is his very last card as a player, featuring Cobb with the Philadelphia Athletics in the final season of his career. Cobb was only with the A's in 1927 and 1928. Very little is known about the production of the unusual "Star Player" candy issue. The manufacturer is not identified, but advanced collectors have always referred to it as the Star Player Candy set. The attribution of this set as "Star Candy" or "Star Player Candy" dates back at least fifty years, even though there is no known evidence of a product by this name. In the old days, collectors identified these cards as R317, but sometime during the 1980s that catalog designation was somehow taken over by Uncle Jacks Gum. The sepia-toned cards measure 1-7/8 x 2-7/8 inches, and are printed on thin stock. The player's name is printed below the image without a team designation. Unlike the 1929 Star Player Candy cards (which have a short biography with the card number), the reverse of the 1928 cards are blank-backed. We are not sure how it was determined that the cards with text backs were produced in a different year than the blank-backed variety, of which seventy-three are checklisted, and suspect that they all may in fact be part of the same series. Collectors have always appreciated this rare and distinctive candy issue, and some have suggested that based on its year of issue, perhaps this set should have always been catalogued as an "E" card set. The card pictures Cobb on the field in full uniform (Athletics) holding his bat. This is a solid medium-grade example, with even wear to the corners (the two lower corners have been folded at the tips), light toning in the wide borders, and a crisp, clean image. The reverse has some very light toning. This is an extremely rare card, one of Cobb's most interesting cards, and one of the key cards from this unusual candy issue. Reserve $1,000. Estimate (open). SOLD FOR $11,750.00