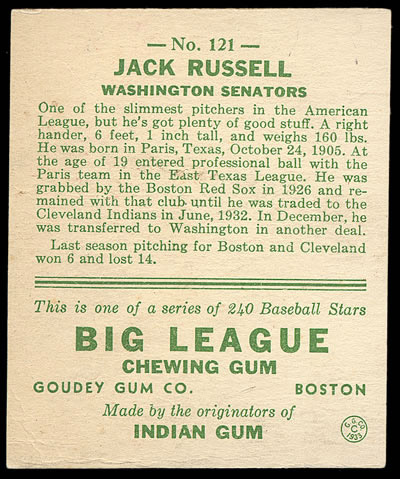 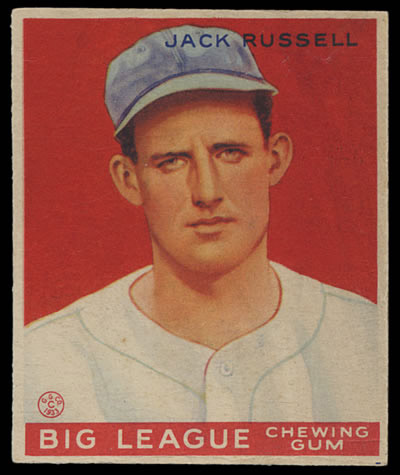 Offered here is a fascinating and unique previously unrecorded 1933 Goudey early production variation. This card is almost identical to the commonly issued card of Jack Russell as appears in the 1933 Goudey set, but is numbered "No. 121" on the reverse (as opposed to #167 as issued). Walter Stewart is #121 in the issued 1933 Goudey set. A small number of similarly misnumbered 1933 Goudey cards have been seen over the years. These cards were never actually issued in packs. All were handcut from the very same early Goudey proof sheet as the famous 1933 Goudey #106 Durocher card. This sheet (actually, partial sheet, as the entire sheet of 24 cards did not survive) was part of the collection of legendary hobby pioneer Woody Gelman. All cards from this sheet had numbers which were different than those actually issued. The one card that was especially noteworthy was the Leo Durocher card, because by chance that card shared the same card number as the famous 1933 Goudey #106 Lajoie, and this one card is very well known. The other cards on the sheet were just as rare (in fact, we believe each of these misnumbered cards is unique), and rarely surface. This is a very interesting and rarely seen printing variation from the 1933 Goudey set. These misnumbered cards were obviously printed before the set was released and final numbers were assigned. The card has a few light paper wrinkles on the reverse and an obvious handcut, and is otherwise in Vg-Ex/Ex condition. Reserve $400. Estimate (open). SOLD FOR $3,231.25