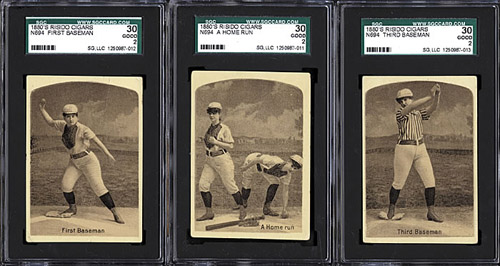 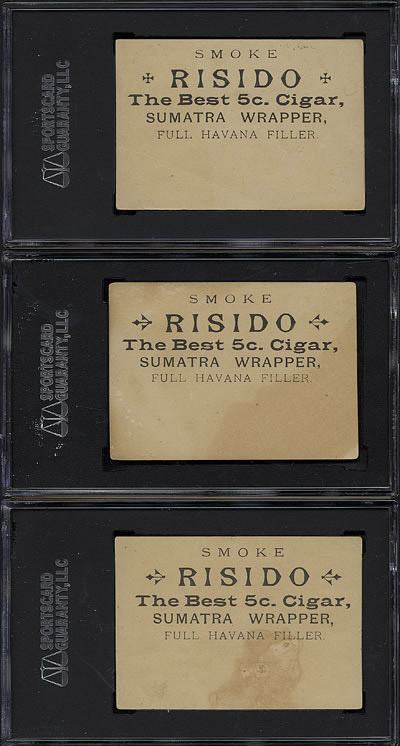 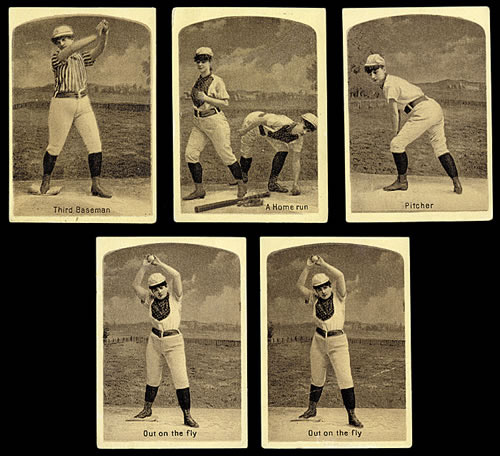 Collection of eight nineteenth-century N694 tobacco cards (five different and three duplicates) comprised exclusively of women ballplayers, issued with Risido Cigars. To us, this is a particularly exciting find. The old-time collector who brought these cards in was very amused and surprised that we were more excited about this little group than other cards he had featuring Major League ballplayers that were clearly far more valuable, especially since he had brought these just as an afterthought and he had these cards tucked away for about thirty years. The reason was simple: we've never before seen even a sample of N694 before. These are just incredibly rare cards. Terry Mitchell's nonsport book pictures samples of just about every pre-1900 nonsport set ever issued, and even this comprehensive volume does not feature a sample for illustration. (He couldn't find one.) Each of these eight cards picture women ballplayers posing in uniform. They measure 2-1/4 x 3-3/8 inches and feature the advertisement for "Risido Cigars" on the reverse. We have selected three of the cards to be graded by SGC: A Home Run (GOOD 30), First Baseman (GOOD 30), and Third Baseman (GOOD 30). The following five cards are ungraded: A Home Run (Vg), two Out on the Fly (both Good), Pitcher (Vg), and Third Baseman (Vg). This is a fascinating collection of rare tobacco cards featuring women playing the game of baseball during the nineteenth century. These cards will naturally be valued far more modestly than rare cards of Major Leaguers from this era, but are considerably rarer than almost all other pre-1900 baseball-related cards. Total 8 cards. Reserve $500. Estimate $1,000+. SOLD FOR $9,987.50