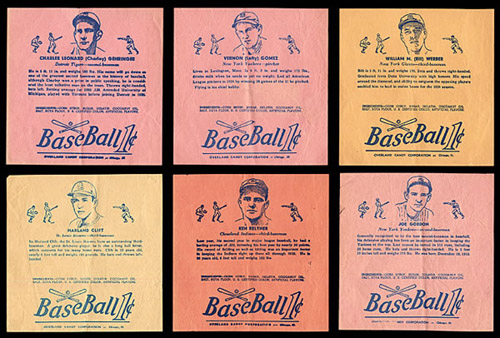 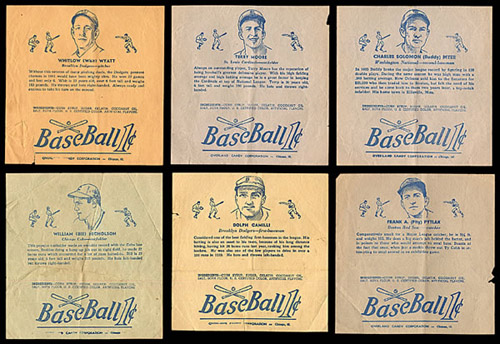 Presented is an extraordinary newly discovered find of eighteen R301 Overland Candy Co. wrappers that surfaced early in February 2008 in a small estate auction in Nashville, Tennessee, and were purchased by our consignor. The gentleman whose collection was being sold was a casual collector, and his collection included a wide variety of items from the 1930s to the 1980s. How he happened to have these incredible rarities is a mystery. This is as large a collection of R301 Overland candy wrappers as we can ever recall seeing at one time. This is a particularly extraordinary group, not just because it is such a large group and includes Joe DiMaggio, but because there are an incredible three new previously uncatlaogued checklist additions in the collection. The extremely rare 1936 R301 Overland Candy set doubled as the actual wrappers for Overland Candy. Not surprisingly, these 5 x 5.25 inch paper wrappers are usually found with folds and creases. R301s are printed in various colors, with a line drawing portrait of the player, his formal name and nickname, team, position, and career summary. This collection of eighteen wrappers (17 different and one duplicate) is highlighted by four Hall of Famers (Joe D, Greenberg, Gehringer, and Gomez). The three Overland wrappers that are previously unknown and new discoveries to the set are Camilli, Moore, and Nicholson (two examples). As noted in the list below, three wrappers have pieces missing and are strictly poor-condition "fillers." The collection is comprised of the following: Camilli (previously unknown, Vg), Clift (Vg-Ex/Ex), Joe DiMaggio (HOF; it is interesting to note DiMaggio is identified on the wrapper with the nickname "Deadpan Joe"; Good condition due to various minor faults including a tiny chip in the lower left but still a great-looking wrapper), Charlie Gehringer (HOF, one small tear, no paper loss, otherwise Vg-Ex, very strong appearance), Lefty Gomez (HOF, Vg/Vg-Ex), Gordon (Vg/Vg-Ex), Hank Greenberg (HOF; Poor due to tears), Keltner (Vg-Ex/Ex), Lavagetto (strictly a filler, 15% paper loss, poor minus), Moore (previously unknown, Gd-Vg), Myer (Vg-Ex/Ex), two Nicholson (both previously unknown, two color variations - orange and gray, one Vg-Ex, one Good), Pytlak (a couple of small edge chips, otherwise Vg), Reiser (strictly a filler, 15% paper loss, poor minus), Travis (poor, corner missing), Werber (Vg-Ex/Ex), and Wyatt (poor). Tears, creases, and missing pieces are all very common with this issue due to its thin stock and method of distribution. Because of this, this particular issue is hard to grade on the same scale as other issues, as we have attempted above. Without reference to the minor flaws that are commonly associated with this issue, eleven of the wrappers range in overall appearance from Vg to Ex-Mt including DiMaggio, Gehringer,and Gomez, and seven range from Pr to Gd including Greenberg. This is a very unusual, rare, and overlooked 1930s issue. Total 18 wrappers. Reserve $1,000. Estimate $3,000+. SOLD FOR $7,050.00