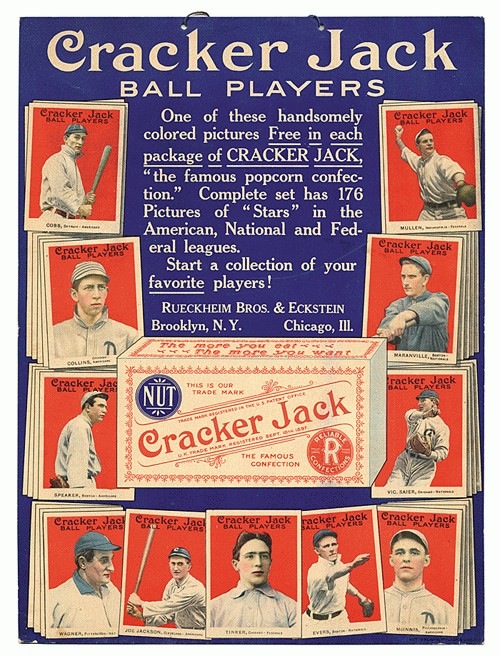 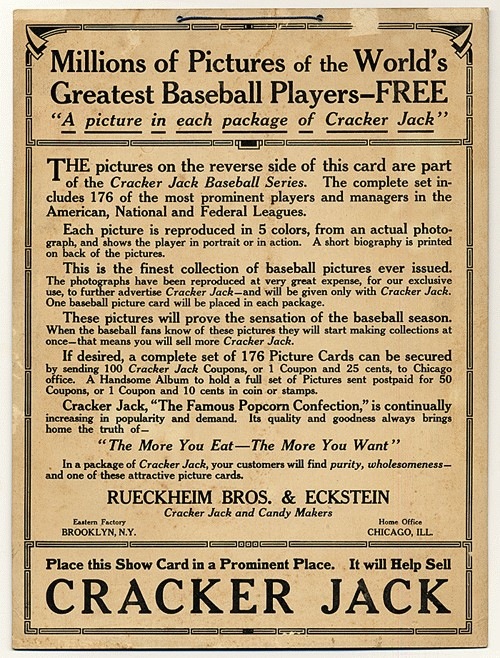 Presented is the most extraordinary of all twentieth-century baseball card related advertising display pieces: The 1915 Cracker Jack advertising display poster. Rarely does an item speak more for itself just by an illustration. A description is almost not necessary, but this piece is so rare that it has never been properly documented. It is an honor for us to do so here. Most collectors, even those few who have heard of its existence, will be seeing this item for the very first time in this auction. This poster was issued to promote the famous Cracker Jack baseball cards issued in 1915. It is unrivaled in design, significance to baseball card collectors, importance as a baseball advertising display item, and rarity. Only two examples exist: this one, and one other that has had restoration. This is the only completely original and unrestored example of this poster in existence.

The 1915 Cracker Jack baseball cards are universally recognized as one of the most classic and highly regarded baseball card sets ever produced. This poster was created by Cracker Jack and distributed for display in candy stores to advertise Cracker Jack, and to create interest in the new and exciting card set. If you went to the candy store in 1915, you might have seen the Cracker Jack poster hanging on the wall, or on the shelf behind the candy counter. It was made to be eye-catching and made to be displayed. The poster is printed on very high quality sturdy cardboard stock, almost like a giant baseball card, and was created with the same uncompromising attention to quality production and design as the Cracker Jack baseball card set. The poster was designed to hang by a string attached at the two holes at the top, or to lean against anything, even a tower of Cracker Jack boxes, standing on its own due to its firm quality construction. The reverse is fully printed, with elaborate text directed to the store owner expressing Cracker Jack's great enthusiasm for the set. The reverse provides details on how customers can secure a complete set of 176 cards by mail and instructs store owners to "Place this Show Card in a Prominent Place. It will Help Sell CRACKER JACK." The text on the reverse also notes "This is the finest collection of baseball pictures ever issued." Almost one-hundred years later, many collectors would agree. The front of the poster pictures cards of the following twelve stars: Ty Cobb, Eddie Collins, Tris Speaker, Honus Wagner, Joe Jackson, Joe Tinker, Johnny Evers, Stuffy McInnis, Vic Saier, Rabbit Maranville, and George Mullen.

Few items generate the response of shock and awe among advanced collectors in so many fields as does this poster. It is one of the great classics among all early twentieth-century American advertising posters, highly valued in the general Americana advertising field, and it is also the single most valuable item in the entire world of Cracker Jack collecting. There are few products that better epitomize classic Americana, or are naturally a focus of serious collecting interest, more than Cracker Jack. This is the best and most desirable Cracker Jack related item in existence.

There is very little pricing history on the 1915 Cracker Jack Poster due to its extreme rarity, and no sales ever at auction. In years past, Robert Edward Auctions has handled the private sales of both 1915 Cracker Jack posters known to exist. The restored example appeared as Lot 2 in Robert Edward Auctions' September 1994 auction, but due to the restoration on that example, it failed to receive the minimum bid of $25,000. It was sold privately immediately following the close of the auction for an offer of $20,000. The poster offered here was long ago personally owned by REA president Robert Lifson. He purchased it from Herman Kaufman, one of the hobby's great and most knowledgeable longtime collectors and dealers, in the mid-1980s for the then princely sum of $8,000. At the time, $8,000 could buy a T206 Wagner. Herman Kaufman had just purchased it days earlier at a lower level from another hobby legend, Josh Evans. In retrospect, all of them knew it was a great item but none of them realized the magnitude of the piece. This was unchartered territory in terms of quality and rarity, and these sales occurred long before the Internet, full-color baseball memorabilia auction catalogs, or the explosion in values that occurred over the next few years. In 1989 Lifson was offered $35,000 to sell the Cracker Jack poster in a direct sale, an offer which he accepted. At the time, $35,000 was more than the value of an entire high-grade Cracker Jack set or a T206 Wagner. The buyer has had it hanging on his wall ever since. After twenty years he has decided it is time to allow someone else the opportunity to enjoy it, and has consigned it to this auction. He's asked us what we think its worth, and we just can't tell him. We didn't know the true value of the Cracker Jack poster in the 1980s, and we still don't know how to value this piece twenty years later. After this auction, we'll know!

In a world where a high-grade Cracker Jack set can sell for hundreds of thousands of dollars, and individual Cracker Jack cards of Ty Cobb and Joe Jackson alone in PSA 9 Mint condition list for $75,000 and $95,000 respectively (and have even higher record auction selling prices), we are optimistic that our consignor will do very well. How well is for the market and buyers to decide. All we can do is present the poster and report the results. Whatever it sells for, it is without question one of the most exciting items we have ever had the privilege of offering. We have always had a special interest in display pieces, advertising items, and baseball cards. This one item combines the very best of all three areas of interest. Like the text on the back of the poster itself, it is hard to temper our enthusiasm. The fact is that whenever we think of the greatest items in the world of collecting, the 1915 Cracker Jack advertising poster is always near the top of the list. Excellent condition. Dimensions: 11 x 14.5 inches. Reserve $25,000. Estimate $50,000/$100,000. SOLD FOR $152,750