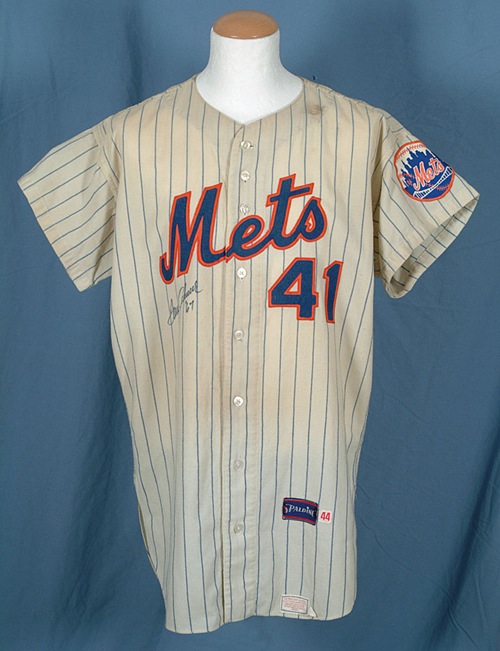 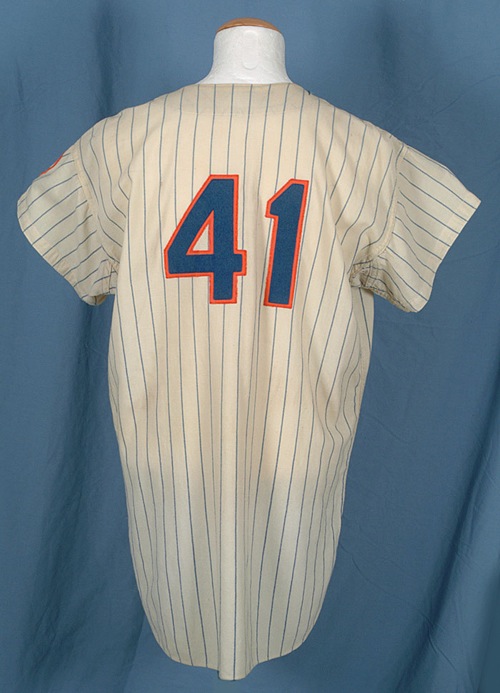 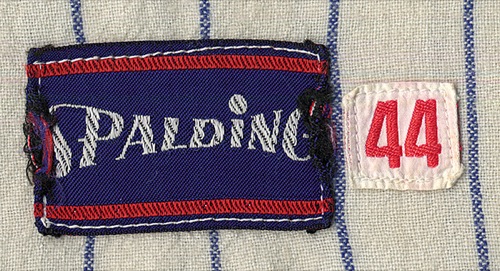 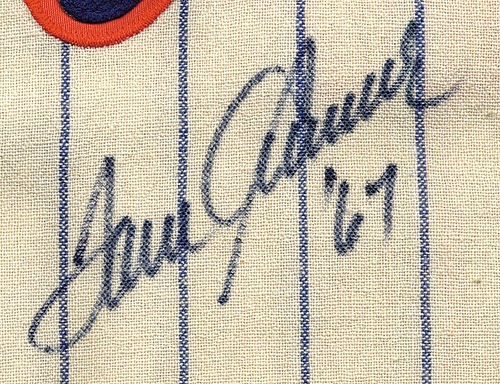 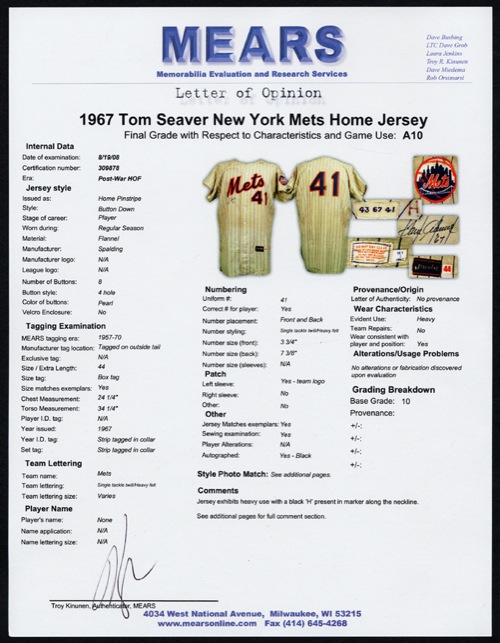 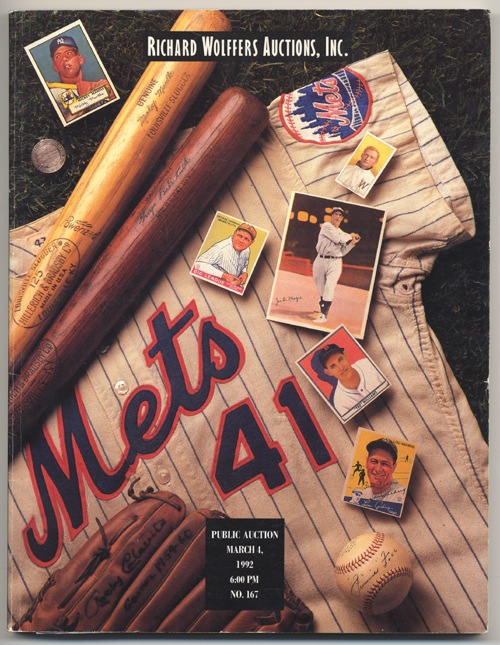 New York Mets home jersey worn by Hall of Fame pitcher Tom Seaver during his rookie season of 1967. Graded A10 by MEARS. This is arguably the finest and most important Tom Seaver jersey that could possibly exist and certainly the most significant New York Mets jersey in the collecting world. Of special note: we believe this to be the very jersey Seaver is wearing on his 1967 Topps rookie card. (This card is a high-number card, issued late in the season, using a photograph taken early in 1967; all visible details of the uniform on the cropped photo of Seaver on the rookie card are a perfect match). For nearly every team in the league, the question of who is the greatest player in franchise history will normally elicit any number of worthy candidates. Not so for the Mets. Tom Seaver was, and in many ways still is, the spirit of the franchise. He was even nicknamed â€˜The Franchiseâ€™ during his early years due to his value to the club. Seaver's performance on the mound, coupled with his leadership in the clubhouse, quickly helped the Mets accomplish what just three years earlier would have been unthinkable to even the most diehard fan: a World Championship. Seaver's first ten years with the club were nothing short of spectacular: a Rookie of the Year Award in 1967 followed by four twenty-win seasons and three Cy Young Awards. Between the years 1967 and 1975 Seaver led the League in wins twice, strikeouts five times, and ERA three times. He also appeared in nine All-Star Games as a Met, a franchise record. When he was traded to the Reds in mid season of 1977 Seaver wept and so did the fans, as it marked the end of the greatest era in Mets history.

The white pinstriped flannel jersey is lettered "Mets" across the front and features the number "41" on both the left breast and reverse. All letters and numerals are appliquÃ¨d in blue felt on orange tackle twill. A circular team patch adorns the left sleeve. The size, year, and uniform number ("43 67 41") are chain-stitched in blue upon a white strip tag located in the collar. Situated on the left front tail are a "Spalding" label, a "44" size tag, a laundry tag, and a flag tag that reads "Set 1 1967." The letter "H" (meaning unknown, it might possibly relate to a clubhouse inventory system) is written in faded black marker in the collar. The reason the jersey is labeled size "43" in the collar (the jersey's actual size), but mislabeled size "44" on the left front tail is easily explained. Jerseys are normally produced in even sizes (i.e., 40, 42, 44, etc). For that reason, the manufacturer only carries a supply of even size tags for use on jerseys. When a special "odd" size jersey is ordered, they simply attach the closest size tag they have in stock. In this case, they used a 44 size tag. Seaver has inscribed the jersey "Tom Seaver '67" in blue Sharpie (grading "9") on the right breast. The jersey is all-original, with no alterations, and displays heavy wear throughout. Seaver was brilliant during his 1967 rookie season. Despite pitching for a team that lost 101 games that season, Seaver managed to compile a 16-13 record and finished the year with a 2.76 ERA. Those numbers were more than enough to earn him the Rookie of the Year Award at season's end. Seaver's arrival provided the Mets with a bona fide mound ace and in just two years time he blossomed into the National League's top pitcher, winning 25 games in 1969 while leading the Mets to their first World Championship.

Graded A10 by MEARS. This is one of only seven Seaver jerseys listed in the MEARS database and one of five graded A10. More important, it is one of only three Tom Seaver New York Mets jerseys listed in the MEARS census. Due to the significance of this jersey, and the abundance of valuable information it is possible to document, MEARS has provided an extensive five-page LOA in addition to its standard one-page LOA. In the five-page LOA (which can be viewed on our website) MEARS fully documents every aspect of the garment and most important provides evidence of a photo match for the jersey. This jersey is one of many Seaver jerseys that entered the hobby in the late 1980s/early 1990s, all of which originated directly from Seaver. Naturally, his rookie jersey was the prize among the group and this piece eventually made its way to the auction block in 1992 as the cover piece in Wolffers March 4th auction. The jersey realized a reported final price of over $150,000 in that auction and has remained in private hands since that time. (The owners of the jersey are actually noncollectors, relatives of the original purchaser, who have long ago sold the balance of the family collection, but kept this jersey, recognizing that it was special.) Few modern era jerseys can compare with this garment in terms of significance or quality. This jersey is Hall of Fame caliber. Seaver is one of the greatest pitchers of the modern era and one of only twenty-two pitchers to record over 300 wins. He retired in 1986 with 311 wins (18th all-time), 3,640 strikeouts (6th all-time), and a 2.86 ERA. He was elected to the Hall of Fame in 1992, his first year of eligibility. LOAs from Troy Kinunen/MEARS and James Spence/JSA. Reserve $10,000. Estimate $25,000+. SOLD FOR $47,000