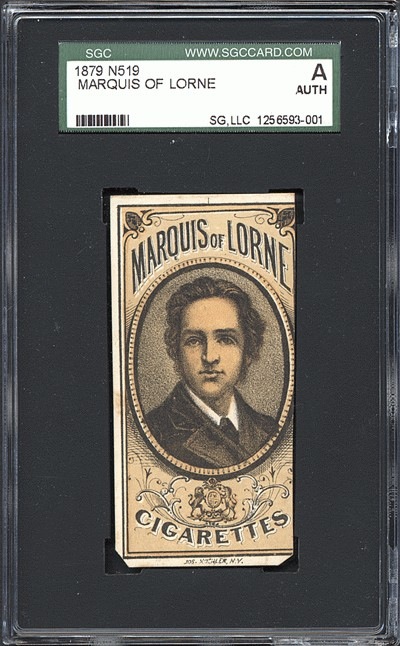 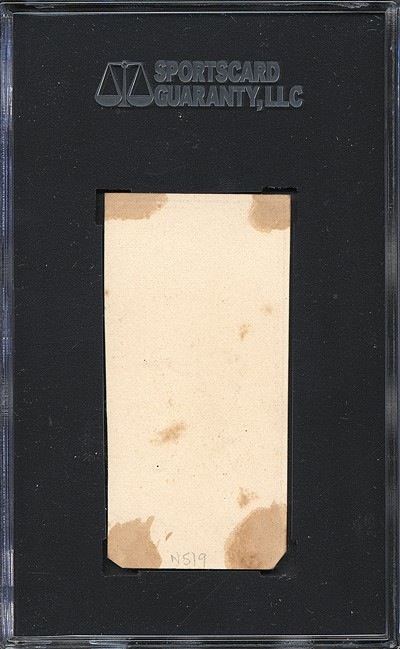 Presented is a legendary rarity that is of monumental historical significance to the field of tobacco and trading cards: The Marquis of Lorne card, the first tobacco card ever issued! Encapsulated and designated â€œAuthenticâ€ by SGC. The Marquis of Lorne card, issued in cigarette packages of the same name in 1879, is universally regarded as the very first tobacco-card insert. It is the precursor of all tobacco and product inset cards that followed. It is unique in design, hence it has always been assigned its own unique ACC catalog number (N519). It is also exceedingly rare. To date, only four examples (including the offered card) are known. Two are in private hands, while the other two reside, respectively, in the Metropolitan Museum of Art (as part of the Jefferson Burdick Collection) and the British Museum (as part of the Wharton-Tiger Collection). The extreme rarity of the card is the primary reason why so few baseball-card collectors are familiar with it today. Among non sports-card collectors, however, it has always held an exalted, if not mythical, status in the field. Noted non sports-card historian Chris Benjamin (former editor of Non-Sport Update and author of the classic reference work Sport Americana Price Guide to the Non-Sports Cards ) has ranked this card as number one on his list of the ten rarest non-sports cards, making note that it is â€œ25 times rarer than the T206 Wagner.â€ As noted by Benjamin in his previously published articles, the card can be definitively dated to 1879 because there is a record of it having been mentioned in a magazine published during that year. The card pictures British nobleman John George Edward Henry Douglas Sutherland Campbell, 9th and 2nd Duke of Argyll, who is better known today by his honorary title, Marquis of Lorne. At the time the card was issued, Lord Lorne was serving as governor-general of Canada, a position he held from 1878 to 1883. (He was extremely well liked and his fame gave rise to the popularity of â€œLorneâ€ as a first name among Canadians.) The fact that Lord Lorne was English and held office in Canada notwithstanding, the Marquis of Lorne tobacco card was produced for distribution in New York, but with one major difference. Unlike all other previously issued trade cards, which were larger in size and normally handed out over the counter, the Marquis of Lorne card was inserted into each pack of Marquis of Lorne Cigarettes. This was a new and revolutionary form of advertising and the first instance of a trade card distributed in product packaging. Although the Marquis of Lorne brand failed to catch on with consumers, thus resulting in low distribution of its cards, the practice of issuing cards in cigarette packages quickly caught on and soon gave rise to many notable issues, including the Goodwin Tobacco cards of the late 1880s and, later, the tobacco cards of the 1910 era. The popularity of insert cards issued with other products, such as candy, also followed. It all began with the Marquis of Lorne tobacco insert card. Not surprisingly, the rare Marquis of Lorne card was first cataloged by Jefferson Burdick, who assigned it the reference number N519 in The American Card Catalog . Burdick owned a Marquis of Lorne card and knew of only one other example at the time. According to Benjamin, Burdick never quite knew what to make of the card and was particularly â€œbothered by the fact that it was a single-card issue distributed at a time when advertising cards were very popular and he thought its inclusion into a cigarette pack may have been an afterthoughtâ€¦However, the Lorne card shares a similar format and style to cards produced by the Thomas Hall Company in 1880 and is now considered by card historians to be the one and only original trading card.â€ As noted earlier, there are only four known examples of this card, two of which are housed in museums. Therefore, unless another should surface, only two examples will ever be potentially available to collectors. That is a sobering fact and one that serves to point out its extreme rarity. This particular card was in an extremely advanced private collection for many years before appearing at auction in 1994 at Christieâ€™s in New York (Lot 197, March 26, 1994, selling for $11,500). It was the first time a Marquis of Lorne card had ever appeared at auction, and an enlarged image of the card appeared on the entire back cover of the catalog (Note: catalog scan appears online). The card has been consigned to this auction directly from the original purchaser of the card at the 1994 Christieâ€™s sale. The black-backed card (3.125 x 1.625 inches) displays two clipped corners and has been trimmed along the right border; the reverse has minor scrapbook paper residue in each of the four corners, the result of having once been mounted in an album, and the pencil notation "N519"; it is otherwise in Excellent condition, presenting exceptionally well, crisp and clean, and is free of any creases. Reserve $5,000. Estimate (open). SOLD FOR $15,275