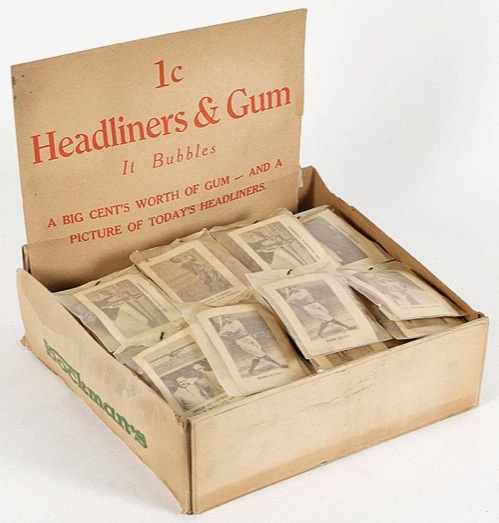 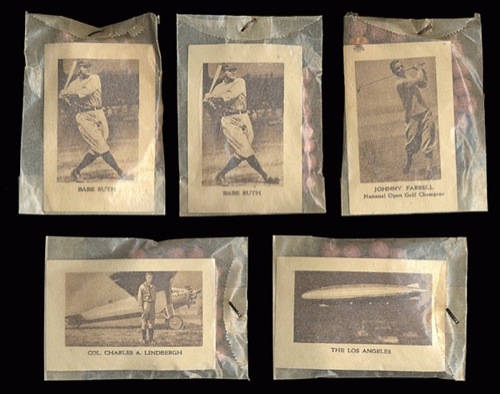 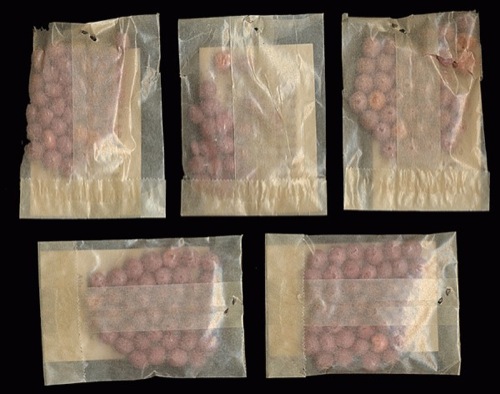 Display box of "Headliners & Gum" packs, issued by John H. Dockman & Sons of Baltimore, Maryland, containing seventy gum packages, plus the original counter-display card. For many decades this rare set has been referred to by advanced collectors as "Star Player Candy." The origin of the set title and the name of the manufacturer have previously been unknown. This extraordinary find reveals that the manufacturer of this issue is John H. Dockman & Sons, the very same gum and candy manufacturer that produced caramel cards in the 1910 era. There are two very similarly designed Dockman sets that are commonly referred to as Star Player Candy (1928 and 1929). The 1928 set exclusively features ballplayers and are blank-backed (73 different players are known to date; several football players are also part of the series). The 1929 issue (the year of the offered box and packs) is identical in design to the 1928 issue but has a short biography on the reverse and the cards are numbered. While we see from this box that the 1929 set was actually entitled "Headliners and Gum" by Dockman, so many collectors know the set as "Star Player Candy" that this name will probably always be used to refer to the set. Our theory, however, is that the name "Star Player Candy" (which we first saw identified in pencil on the back of cards from this set by legendary collector Buck Barker in the early 1970s) did not come out of thin air, though it may have been modified slightly by accident over time. It is very possible (likely, we think) that the 1928 set, which included only baseball and football players, was actually entitled "Star Players & Gum" by Dockman's, as opposed to the title of 1929's "Headliners & Gum" series (which features various subjects including sports and aviation).

Each unopened pack (2.25 x 3.5 inches), which is actually a glassine envelope stapled shut along the top, contains a single card and approximately forty tiny gum balls. A total of seventy-two cards are offered here (seventy still housed in their original packages), representing eighteen different subjects. The hoard of unopened packs in this box originally included four with Babe Ruth, one Lou Gehrig, one Walter Johnson (uncatalogued), a golfer, and many aviation-related cards including Charles Lindbergh. We have separated out two of the four Babe Ruth packs, the one Lou Gehrig, and the one Walter Johnson pack, to offer as separate lots in this auction. All of the other packs, including two Babe Ruths, are included in this lot. One of the most interesting aspects regarding the cards in this box is that, aside from Babe Ruth and the Johnny Farrell (famous golfer, winner of the 1928 U.S. Open), all of the other cards relate to the field of aviation and picture either famous aviators or actual planes.

In presenting the inventory of the cards found in this box, we have listed the subjects exactly as they are identified on the front of the card. The number of cards for each subject (if more than one), is noted in parentheses: Babe Ruth (2), Charles Lindbergh (8), Miss Amelia Earhart's Plane, Johnny Farrell, Stinson Plane, The North Star (3), Com. Richard E. Byrd (11, two different cards, one pictures him with his helmet on, the other ten picture him in extreme close-up with no helmet on), The American Girl, Bellanca Monoplane "Rosemarie" (18), Army Flyers Hop Off (12), Lieut. Champion (2), Lieut. Williams and New Biplane (2), Pride of Detroit, Clarence Chamberlain (3), The Question Mark, The Los Angeles, "Woolaroc" In Flight, and Fokker Army Plane. Additionally, two loose cards are also present in the box: Fokker Army Plane and Com. Richard E. Byrd (extreme close-up, no helmet). One of the glassine envelopes housing a Ruth card has a split on the reverse, resulting in the loss of a few gum balls. The second Ruth card has a very small corner crease in the lower left. The cards do not appear to have been harmed by the loose balls of gum that easily rattle around in the packs. All the cards have literally been untouched and protected from all elements including light since 1929, though in many cases very mildly conforming to the gum with a gentle bend or ripple (probably no more so than when packed in 1929). We have no way to predict with certainty how these cards would grade if removed from the packs, but with few exceptions we would suspect they would grade Excellent or better, in many cases possibly much better. These packs look exactly as they did when originally packed by John H. Dockman & Sons in 1929.

The counter-display box (8.5 x 8.5 x 3 inches) has numerous very serious imperfections (both to the top and the bottom), including tears, splits along the seams, and pieces missing, but still offers outstanding display value. Both the top and bottom have printing that identifies the set as issued by John H. Dockman & Sons. A paper label on a side flap of the extremely poor condition box top has the Dockman's logo which includes its address (32-34 E. Montgomery St., Baltimore, MD.). The "Headliner & Gum" header card also has serious imperfections (primarily tearing with paper loss in lower right) but still has great display value as well, in addition to great historical significance to the set. This box is one of the most remarkable highlights of the newly discovered extraordinary find of unopened circa 1930s gum-card packs and boxes presented in this auction. Total 70 unopened packs. Reserve $5,000. Estimate (open). SOLD FOR $15,275