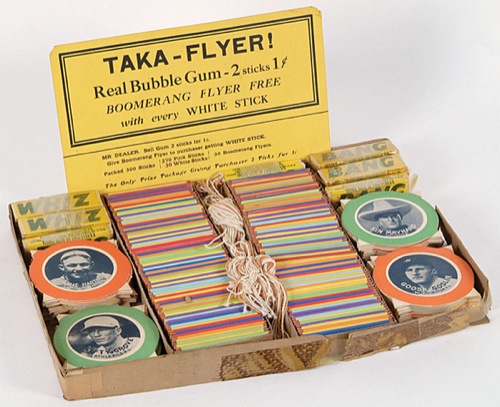 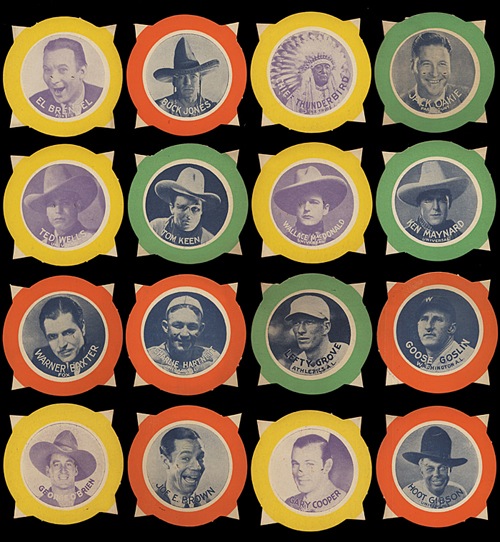 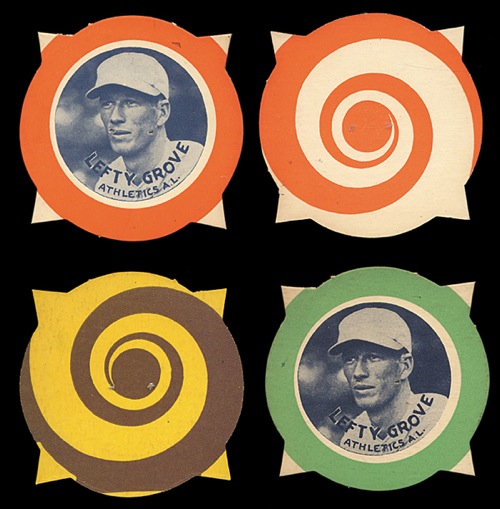 Addendum: The printed catalog dates this "Whiz-Bang" Frank H. Fleer Corp. box and card issue to "Circa 1932". Additional information has since been obtained that allows us to date this issue with virtual certainty to precisely 1930.

Presented is what is perhaps the most remarkable and significant discovery of all the boxes and packs included in the extraordinary find of unopened gum boxes offered in this auction. This display box for Whiz-Bang Chewing Gum, issued by the Frank H. Fleer Corporation of Philadelphia, Pennsylvania, is remarkable for its inclusion of a heretofore unknown card set featuring notable Major League stars and Hollywood celebrities. (The names "Whiz" and "Bang" appear, respectively, on either side of the label.) The set is of extraordinary quality. The premiums, which are circular in design (each 3 inches in diameter) with four triangular protrusions, feature portrait images of each subject with his name printed along the base (along with team or movie studio affiliation in most cases). A spiral pattern is printed on the reverse. Color variations exist for most of the cards offered here (orange, yellow, or green borders). A total of eighty-three premium cards, representing sixteen different stars (believed to be a complete set), are included in the box, all of which remain in pristine condition. The three baseball players in the set, all Hall of Famers (Grove, Hartnett, and Goslin) are represented by a total of only fifteen cards including duplicates. These cards have literally never been touched, and have remained in the confines of this original box, protected from all elements including light, since 1932. It is simply remarkable that this set has not been catalogued and has remained completely unknown until now, but that is exactly the case. The cards are all the more amazing due to their extraordinary high quality. These are extremely sturdy high-quality cards, beautifully produced with exceptionally high manufacturing standards. They are just great-looking cards. The eighty-three premium cards offered here represent the entire find. No cards have been removed. To the best of our knowledge, all known examples in the world are included here in this lot.

While this is a previously unknown issue, we are fortunate that the box includes a manufacturer's counter-display box insert that provides valuable information about these cards and their method of distribution. The gold-colored insert reads: â€˜Taka-Flyer! ï¿½ Real Bubble Gum ï¿½ 2 sticks 1 cent ï¿½ Boomerang Flyer Free with every White Stick ï¿½ Mr. Dealer. Sell gum 2 sticks for 1 cent. Give Boomerang Flyer to purchaser getting WHITE STICK. ï¿½ Packed 300 sticks ï¿½ 270 pink sticks ï¿½ 30 white sticks ï¿½ 30 Boomerang Flyers ï¿½ The only prize package giving purchaser 2 picks for 1 cent.â€™ The box houses eleven five-cent packs of Whiz-Bang Gum (identified on the packaging as Frank H. Fleer Corp. products, hence the attribution to Fleer). The center compartment contains 145 individual sticks of gum, each housed in a nondescript colored wrapper. As noted on the counter display insert, some of these individual gum sticks are white, and if selected by the customer it would entitle him or her to a free boomerang flyer. Also included in the box are a quantity of colored strings, which appear to have a function related to the flyer. While we cannot state with certainty, it appears that the string was used in some manner to launch the boomerang flyer. Each card has two very tiny factory-punched holes in the center, and the string was most likely threaded through the holes in a manner that would then help either propel or twirl the card in the air. Although the set is undated, the Lefty Grove card pictures him as a member of the Philadelphia A's, which would define the cards as issued in 1933 at the latest (Grove's last season with Philadelphia was in 1933, and the Philadelphia-based Fleer Corporation would not picture Grove in an incorrect uniform, let alone do so in such an elaborate high-quality production including such a relatively modest number of cards). The box (12.5 x 8.5 x 1 inches) has imperfections (including torn flaps and numerous tears) but the interior components are all in impeccable condition, looking just as they did when originally issued. Reserve $5,000. Estimate (open). SOLD FOR $18,800