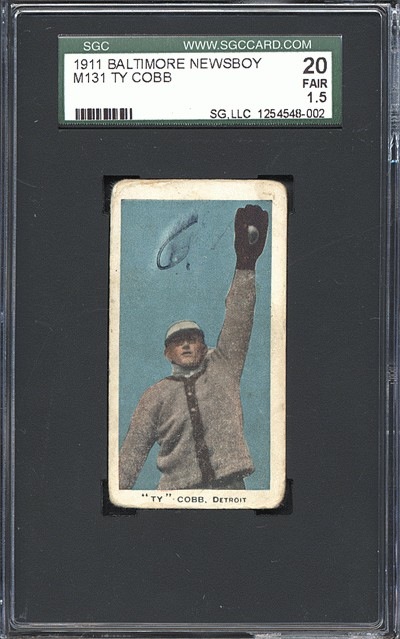 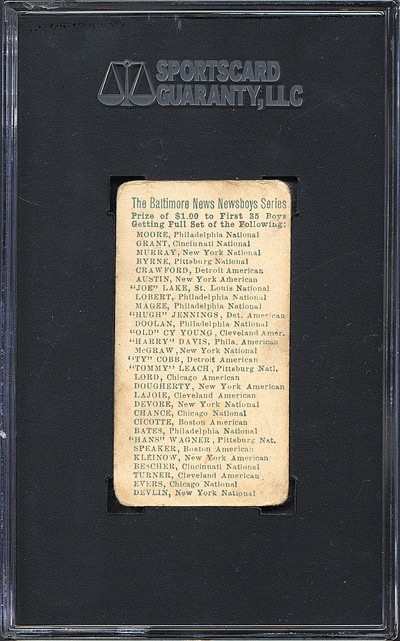 Graded FAIR 20 by SGC. The 1911 M131 Baltimore News Newsboys Series set is an incredibly rare baseball card issue. Presented is the extremely scarce key card from the set: Ty Cobb. This set is very similar in design to George Close Candy, but with each player image printed against a light blue background on the front, and with the reverse featuring advertising along the top, which reads, â€œThe Baltimore News Newsboys Series â€“ Prize of $1.00 to First 35 Boys Getting Full Set of the Following:" followed by the complete thirty-card checklist of the set. Based on the reverse advertising, this set may have been a special promotion produced for and marketed exclusively to The Baltimore News newsboys. This type of severely limited distribution would certainly account for their extreme rarity. Jefferson Burdick gave this E94-related issue its own catalog number (M131) in the American Card Catalog because they are clearly a distinct issue from E94. This example has a large ink mark which appears to be the letter "C" in the background (an apparent attempt long ago to erase it caused a hint of white in the blue blue background in the area of the ink mark). If not for this extremely serious flaw, the card would be in Good condition. It is otherwise very clean, with rounded corners, no creases, and a very clean reverse, which is especially desirable for sample cards from this set. This is a very rare opportunity to acquire a low-grade example of the key Hall of Famer from one of the rarest prewar issues in all of card collecting at a potentially reasonable price level. Another example of this card, which had the very same SGC grade, but was clearly far superior, was sold on Ebay (June 2008) for $25,100. Reserve $1,000. Estimate (open). SOLD FOR $9,988