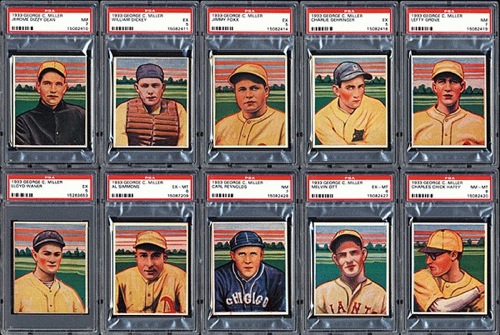 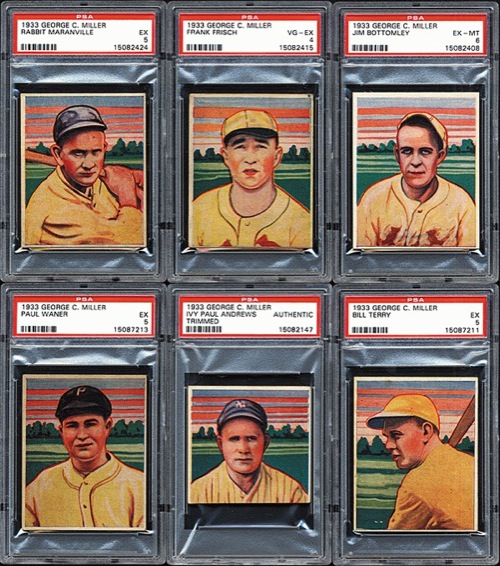 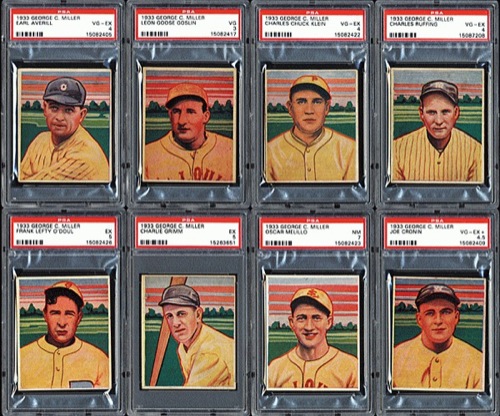 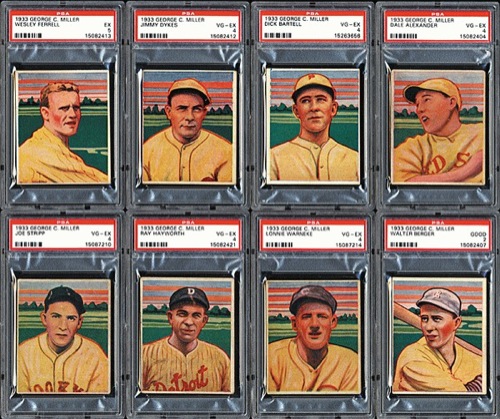 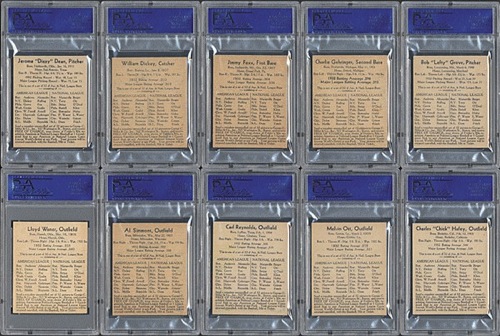 Presented is one of the finest complete sets of R300 George C. Miller cards to ever be assembled, and by far the finest set we have ever seen. This extraordinary set is from The Charlie Conlon Collection. For over thirty years Charlie searched for R300 George C. Millers, acquiring cards whenever they were available and constantly upgrading. This set, the result of his great efforts, is comprised of the highest-grade example of each R300 George C. Miller card that he was able to find in over three decades of diligent searching. His duplicates are offered in separate lots in the auction. Among 1930s gum and candy card issues, few are accorded more respect than the 32-card set issued by the George C. Miller Company of Boston. Their striking colors, artistically unique design, and rarity compared to other 1930s sets make R300s one of the most fascinating, distinctive, and difficult-to-complete of all sets from the 1930s. This world-class complete set has been professionally graded in its entirety by PSA. Twenty-nine of the thirty-two cards have been submitted to PSA for grading by REA (three cards were already graded ). This is the number-one set and the only complete set on the PSA Registry. The average grade is 5.20. This is also, to the best of our knowledge, by far the finest set of this popular issue to ever be offered as a complete set in the history of the hobby.

Andrews was intentionally issued in very limited numbers so that the George C. Miller Company would not have to give out too many valuable prizes in exchange for complete sets, as detailed by the redemption offer on the back of each card. Only two or three uncancelled Andrews cards are known to exist. In the 1980s, a small find of R300 Andrews cards surfaced that had all been redeemed. All of these cards were canceled by having the lower third of the card cut away, so that the same card could not be used a second time to redeem another valuable prize. The Andrews card in this set is one of the ten or fifteen examples from the find.

The R300 George C. Miller set is universally recognized as one of the most significant of all prewar baseball card issues. Very few complete sets exist. The assembly of a set of this caliber is an extraordinary collecting achievement. This is world-class set of one of the most important and rarely-offered of all 1930s card sets. The total SMR value for 31 of the 32 individual cards (not including the Authentic card of Andrews) is $38,010. It is our experience that a vintage set such as this, in such extraordinary high grade, let alone the highest-graded set ever assembled, may be valued by the market at a significant premium to SMR. Total 32 cards. Reserve $10,000. Estimate $20,000/$30,000+. SOLD FOR $246,750