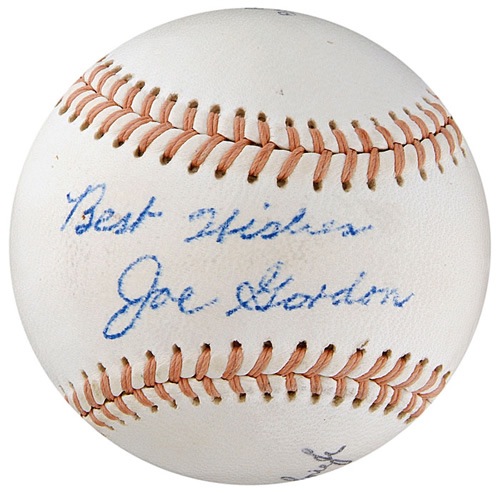 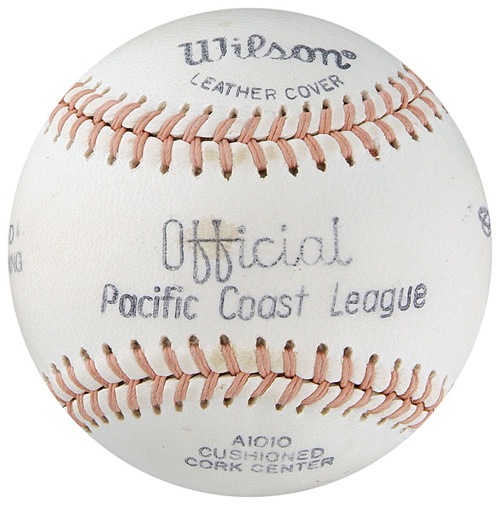 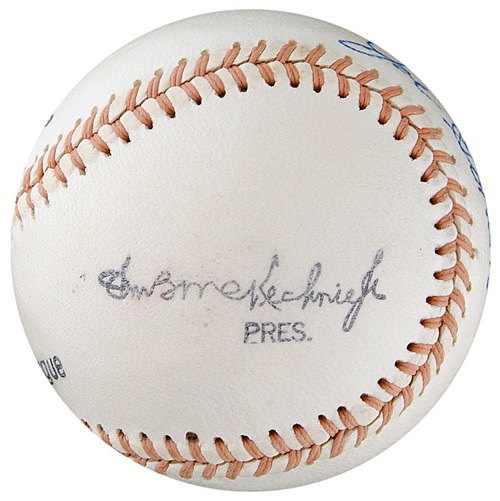 Official Pacific Coast League (McKechnie) ball inscribed in blue ink on the sweet spot by Joe Gordon, one of the most recent inductees into the Baseball Hall of Fame. Gordonâ€™s inscription reads â€œBest Wishes/Joe Gordonâ€ and grades â€œ7/8.â€ Aside from a very tiny area of light discoloration on the label, the ball is in Near Mint condition. William McKechnie was president of the Pacific Coast League from 1969 through 1972, thus allowing us to date the ball to that four-year span. Joe Gordon single-signed balls are rare. Gordon passed away in 1978 at the age of sixty-three, but he wasnâ€™t elected to the Hall of Fame until 2009. As is the case whenever a player is elected to the Hall posthumously, especially decades after his death, the supply of available signature examples (especially on single-signed balls, a very popular area of collecting) can never meet the overwhelming demand. Gordonâ€™s election by the Veteranâ€™s Committee in 2009 took most fans by surprise and it is unlikely that many collectors had the foresight decades ago to obtain Joe Gordon's signature alone on a baseball. In looking at Gordonâ€™s resume, however, he seems perfectly qualified to enter Cooperstownâ€™s hallowed halls. A nine-time All-Star, he was not only one of the top defensive second basemen of his era but a power hitter as well. Gordon set an American League record (since broken) for home runs by a second baseman in 1948 and his career total of 246 also established a record for American League second basemen at the time of his retirement in 1950. After a stellar World Series performance for the Yankees in 1941, manager Joe McCarthy had this to say about his star second baseman: â€œThe greatest all-around ballplayer I ever saw, and I donâ€™t bar any of them, is Joe Gordon.â€ Those words are especially telling considering the fact that McCarthy managed both Gehrig and DiMaggio. The following season Gordon justified McCarthyâ€™s remark by winning the American League MVP Award over Triple Crown winner Ted Williams. Following his playing career, Gordon managed for a number of Major League clubs before retiring for good in the early 1970s. LOA from James Spence/JSA. Reserve $500. Estimate $1,000/$1,500. SOLD FOR $4,994