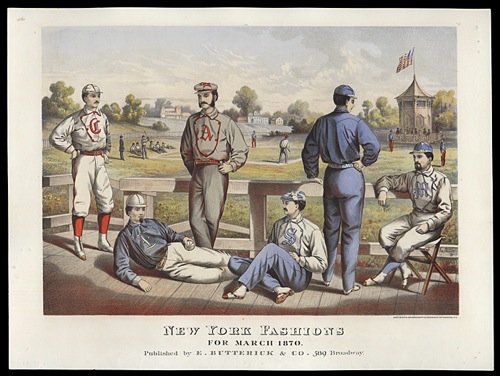 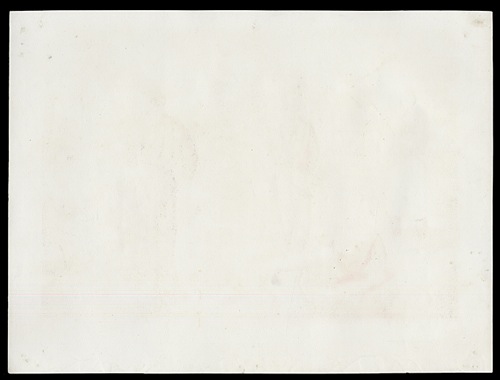 Newly discovered example of what is universally regarded as one of the premier nineteenth-century baseball display pieces ever produced: the 1870 "New York Fashions" color baseball lithograph. Dating from the dawn of professional baseball, this extraordinary and rare full-color lithograph, issued in 1870, pictures six ballplayers modeling the various uniform styles of the period. The exceptional visual appeal of the piece is further accentuated by the game-in-progress scene depicted in the background. While the players themselves are generic in nature, the uniforms they model are those of actual ball clubs, including the Cincinnati Red Stockings, the Brooklyn Atlantics, and the New York Mutuals. The lettering along the base of the white border reads "New York Fashions - For March 1870 - Published by E. Butterick & Co. 589 Broadway." The name of the lithographic publisher ("Hatch & Co., 218 Broadway, Herald Building, N. Y.") appears in smaller lettering in the lower right corner. The name of the artist, Ino Schuller, appears in small script on the fence to the far right. Despite the fact that one of the players holds a ball labeled "Peck & Snyder" and presents the latest baseball uniform styles for the era's most prominent teams, we believe that this litho was not primarily intended to be an advertising piece, but rather a decorative art print meant for wall display. In all respects this print was produced with the processes and production values of other fine art prints of the era, such as those produced by master printmakers Kelloggs and Currier & Ives. It is notable on many counts, including its extremely early date of issue for an artistic baseball-theme piece, its colorful graphics, exceptional artwork, and incredible decorative value.

This is also an extremely rare print. It is one of only four examples we have ever encountered, and only the third we have ever seen at auction. (A low-grade example, with the lower margin trimmed, appeared as Lot 199 in the famous 1999 Halper Collection auction and realized a final sales price of $4,312; a high-grade example appeared on the cover and as Lot 823 in Robert Edward Auctions April 2007 sale, where it sold for $22,325.) This piece was just recently discovered by our consignor among a stack of nineteenth-century art prints, all of which were published by E. Butterick & Co., of New York City. Although the piece was in outstanding condition at the time of its discovery, it displayed a number of minor cosmetic flaws common to most nineteenth-century art prints, including approximately twenty-four tiny pinholes (all but six are located in the white border areas), mold spores, fly specks, and light surface wrinkles. Prior to consignment, our consignor sent the piece to a professional art conservator who cleaned the piece, pressed out the minor surface wrinkles, and filled in all of the tiny pinholes. All of the work was masterfully done and the piece now displays as beautifully as it did when first issued. Although the restored pinholes along the border areas are visible upon close inspection, the few in the central image are practically invisible and the central image area projects a pristine Near Mint to Mint appearance. This is without a doubt one of, if not the finest, of the few known examples in terms of appearance, especially given the fact that nearly all of the visible flaws (the filled in pinholes along the border) can be easily matted out. The piece is complete as issued with full margins (not trimmed) and measures 16.25 x 12 inches. This is an extraordinary, heretofore unknown, example of one of the most spectacular nineteeth-century baseball display pieces ever issued. Reserve $5,000. Estimate $10,000+. SOLD FOR $15,275