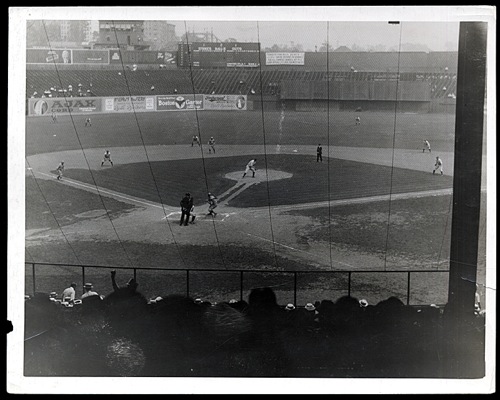 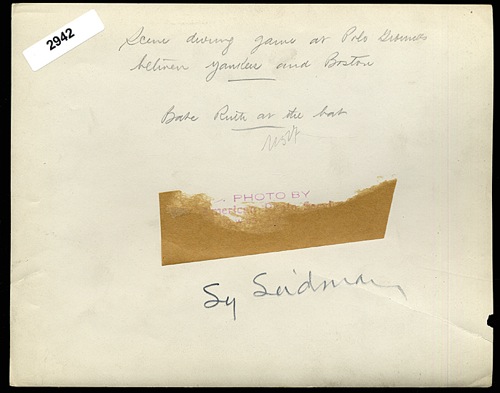 Remarkable and extremely historically significant original news photo of Babe Ruth at bat in a game between the Yankees and Red Sox taken at the Polo Grounds. The reverse markings consist of the following: a partially obscured credit stamp that appears to read "Photo by American Photo Services"; remnants of the original paper caption; a vintage pencil notation reading "Scene during game at Polo Grounds between Yankees and Boston - Babe Ruth at the bat"; and the name of the photographer, "Sy Seidman." This is one of the earliest photos extant picturing Babe Ruth at bat during an official Major League game, and adding to this great significance is the fact that this game is against the New York Americans. We have seen numerous photos of Ruth as a member of the Red Sox, from snapshots to large-scale panoramas, and everything in between, but we cannot recall ever seeing a game-action scene featuring him at the plate. Despite the fact that the photo is undated, it is most likely from either 1918 or 1919. It was in 1918 that Ruth first began seeing extended play as an outfielder. In the scene here, we can tell from the scoreboard that it is the top of the first inning, no score, and there is one out. The Red Sox have runners on second and third, meaning Ruth must be batting fourth in the lineup. Ruth almost certainly would not have batted fourth on the 1915 team when he was pitching, and if the World Series lineups are any indication, he did not bat fourth in 1916 or 1918 when on the mound either. Even in the 1918 World Series, after a season in which he led the Majors in home runs with eleven, Ruth only started the two games in which he pitched. Ruth appeared in fifty-nine games as an outfielder in 1918, batting .300 with 11 home runs and 66 RBI. In 1919 he became an everyday player, appearing in 111 games and finishing the season with a .322 average and league-leading totals in home runs (29), RBI (114), runs (103), and slugging percentage (.456). Although it is entirely possible that this photo dates to 1918, given the information cited, it seems much more likely to be from 1919, when the cleanup spot in the lineup was clearly his. While the identification of Ruth relies upon the limited view we can see (which naturally does not include his portrait) as well as the period reverse notations, that is the nature of the photograph. This is also a particularly interesting panoramic-style view taken through the safety netting behind home plate. The photo (10 x 8 inches), which displays exceptional clarity, has a few very minor flaws common to nearly all working press photos, including a one-inch horizontal tear along the right border, a small chip in the left border, and a few light surface wrinkles. In Very Good to Excellent condition. Reserve $400. Estimate $800+. SOLD FOR $940