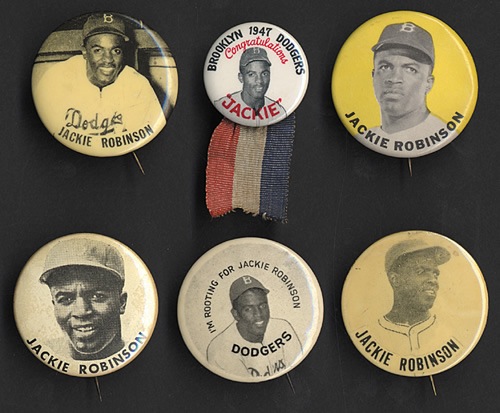 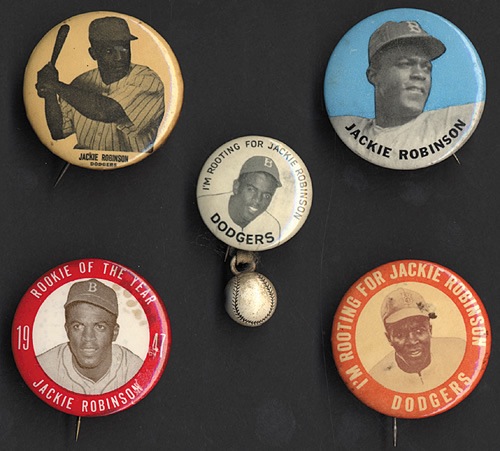 When Jackie Robinson broke into the Majors in 1947, numerous pins were produced for sale at stadium concession stands to memorialize the event and to allow fans to express their support. The late 1940s and early 1950s were the heyday of the "stadium pin" sets, so in the years that followed his Major League debut, additional Jackie Robinson pins were also issued. Aside from Babe Ruth, perhaps no player has ever been the subject of more pins (and more interest from pin collectors) than Jackie Robinson. This is an outstanding collection of eleven different Jackie Robinson pins. 1) Classic "1947 Brooklyn Dodgers Congratulations 'Jackie'" pinback. This unusual pinback was specifically designed to be worn as a show of support for Jackie Robinson by dedicated fans. Diameter: 1 inch. In Near Mint condition, with original ribbon. 2) This circa 1947 Jackie Robinson PM10 stadium pinback featuring Jackie Robinson looking to the right is particularly noteworthy for its great rarity. It is also interesting to note that in the photograph used on this pin he is wearing a Montreal Royals uniform. Robinson, of course, was called up to the Dodgers from Montreal, suggesting that this PM10 stadium pin was probably issued very early in 1947. In Near Mint condition. 3 & 4) Both sizes (1-inch variety with ball attachment, and 1.75-inch diameter) of the classic circa 1947 "I'm Rooting For Jackie Robinson" pin. Both in Excellent condition. 5) Extremely rare PM10 white background portrait pin. Ex-Mt. 6) Circa 1948 PM10 dugout pose. Nr/Mt. 7) Circa 1952 PM10 batting pose (some celluloid separation along edge, displays Ex from front, which is actually better than usually seen for this distinctive pin). 8 & 9) "1947 Rookie of the Year" with red border and "I'm Rooting For Jackie Robinson" with orange border; similar in design, though the orange-border pin is far rarer; each in Good condition with some foxing on the red-border pin. 10 & 11) Classic circa 1950 PM10 portrait pins, each part of a larger series of Dodgers players, with yellow and blue backgrounds respectively. Both Nr/Mt. Unless otherwise noted, the diameter of each pin is 1.75 inches. This lot presents eleven very significant Jackie Robinson celluloids worthy of any Jackie Robinson or advanced pinback collection. Auction records for the 1947 PM10 picturing Robinson in a Montreal Royals uniform exceed $1,000. Total 11 pins. Reserve $1,000. Estimate $2,000+. SOLD FOR $2,938