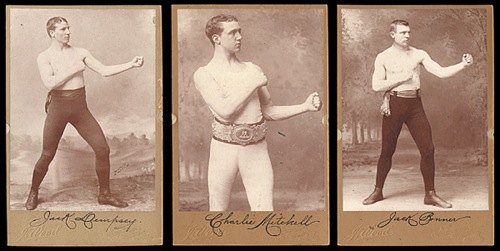 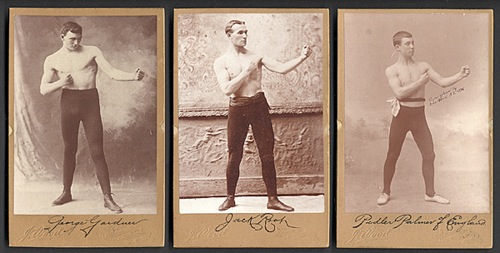 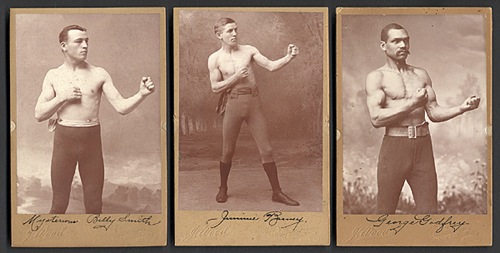 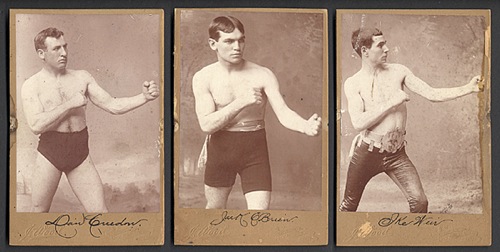 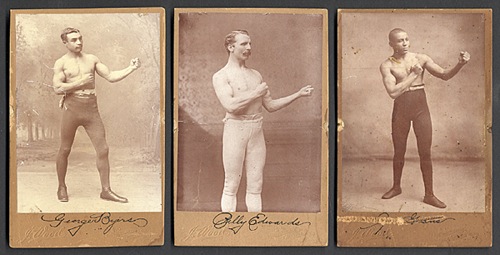 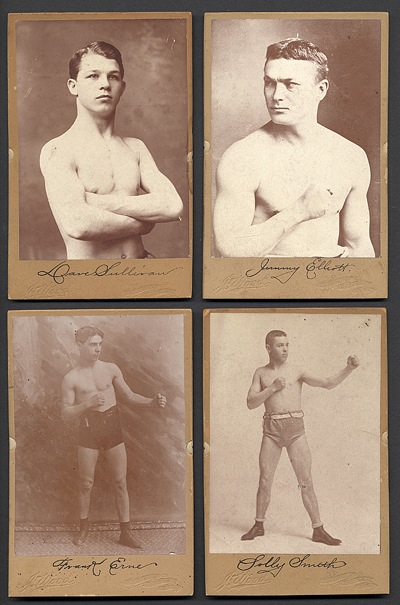 Collection of nineteen extremely rare boxing cabinet cards, including seven Hall of Famers, produced in 1886 by the John Wood Studio of New York City. Sophisticated card collectors will instantly recognize the name of noted baseball photographer John Wood. Wood is best known among collectors of baseball cards for creating the images used to produce each playerâ€™s respective tobacco card in the rare 1886 N167 Old Judge baseball issue, as well as many other extremely important nineteenth-century baseball studio images. While few collectors are aware of this boxing cabinet-card series because of its great rarity, it is, by any measure, one of the premier nineteenth-century boxing sets. Each of the formal studio photos (except two) captures the respective pugilist in a traditional boxing stance. The photographerâ€™s name and location is stamped in relief at the bottom of the mount (â€œJ. Wood - Opposite the Peoples Theater New York"). Each mount bears the fighterâ€™s name beautifully scripted in black ink for identification below his image. This appears professionally executed and may have been done by the studio. The collection consists of the following: Jimmie Barry (HOF; retired undefeated), Jack Bonner, George Byers (early black boxer), Don Creedon, Jack Dempsey (HOF; Middleweight Champion from 1884 to 1891), Billy Edwards, Jimmy Elliot (fought Sullivan for Heavyweight title in 1882), Frank Erne (Lightweight Champion from 1899 to 1901), Joe Gans (HOF; Lightweight Champion from 1901 to 1908), George Gardner (Light Heavyweight Champion in 1903; lost title to Bob Fitzsimmons), George Godfrey (HOF; early black boxer), Charlie Mitchell (HOF; fought Sullivan for Heavyweight title in 1888), Jack O'Brien (HOF), Thomas "Peddler" Palmer (English Bantamweight), Jack Root, Mysterious Billy Smith (HOF; Welterweight Champion in 1892), Solly Smith (fought George Dixon for Featherweight Title), Dave Sullivan (waist-up pose), and Ike Weir (known as "Champion of the Featherweights" in 1880s). Nine of the photos are Excellent, and ten are Vg and lesser (downgraded for surface scratches, a crease or two, stains). All the mounts have evidence of two tack marks (semicircle) in the center of the left and right edges, suggesting that these cabinet cards may have long ago been mounted together in an impressive framed display. Extremely rare boxing cards such as these are currently valued at a very small fraction of the value of similarly rare and substantial baseball cards, so, in comparison, they represent an extraordinary value. This is a very attractive and extremely substantial collection of these photographic boxing cabinet cards by John Wood, one of the premier studio photographers of the era. Dimensions: each 4.25 x 6.5 inches. Total: 19 cabinet cards. Reserve $1,000. Estimate $2,000+. SOLD FOR $2,644