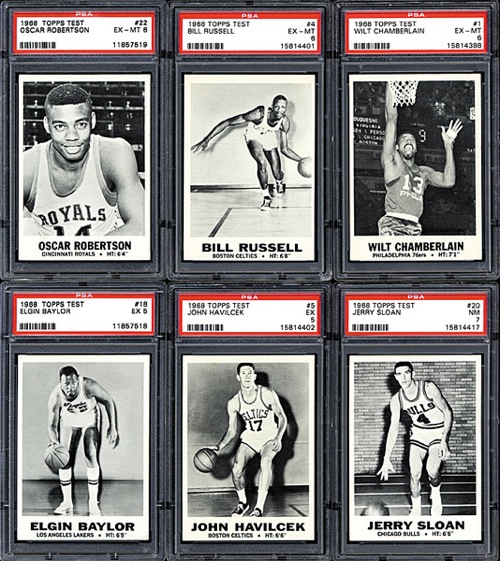 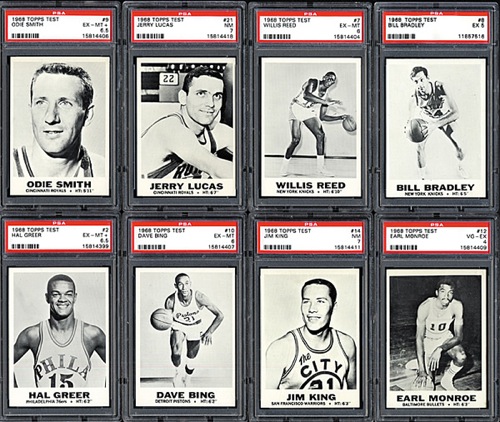 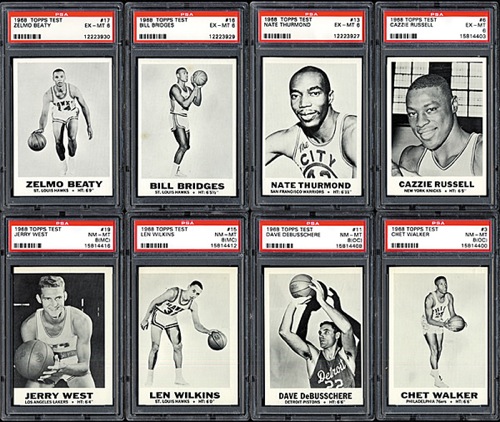 Outstanding high-grade complete set of twenty-two cards from the extraordinarily rare 1968 Topps Basketball Test series, each graded and encapsulated by PSA. This is one of rarest sets of all 1960s Topps test issues. The first complete set we have ever offered, this is one of the few Topps sets from the 1960s that make 1968 Topps 3Ds look common! This set was never actually issued to the public and approximately only 200 examples are known to exist. According to reports that we have read, this series was known until the early 1990s when a find of approximately eighty cards was discovered. In the following years, according to the collectors we have spoken with, an additional twenty cards surfaced, and then another group of approximately ninety-three cards became available from the son of a Topps executive. The black-and-white images used to make these elusive cards are from press photos released by the players' respective teams. The reverse of the cards features puzzle pieces, which when assembled form a large picture of Wilt Chamberlain dunking. The PSA grades are as follows: Four NM-MT 8: #3 Walker (OC), 11 DeBusschere (HOF, OC), 15 Wilkins (HOF, MC), and 19 West (HOF, MC). Three NM 7: #14 King, 20 Sloan (HOF), and 21 Lucas (HOF). Two EX-MT+ 6.5: #2 Greer (HOF) and 9 Smith. Nine EX-MT 6: #1 Chamberlain (HOF), 4 B. Russell (HOF), 6 C. Russell, 7 Reed (HOF), 10 Bing (HOF), 13 Thurmond (HOF), 16 Bridges, 17 Beaty, and 22 Robertson (HOF). Three EX 5: #5 Havilcek (HOF), 8 Bradley (HOF), and 18 Baylor (HOF). One VG-EX 4: #12 Monroe (HOF). This is an extraordinary high-grade complete set of this unbelievably rare Topps test issue. The SMR value for the group (not including the four qualified cards and the one VG-EX 4) is $11,790. Total 22 cards. Reserve $5,000. Estimate $10,000+. SOLD FOR $29,375