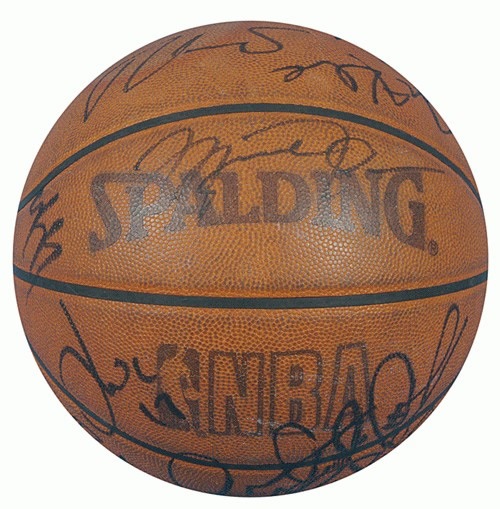 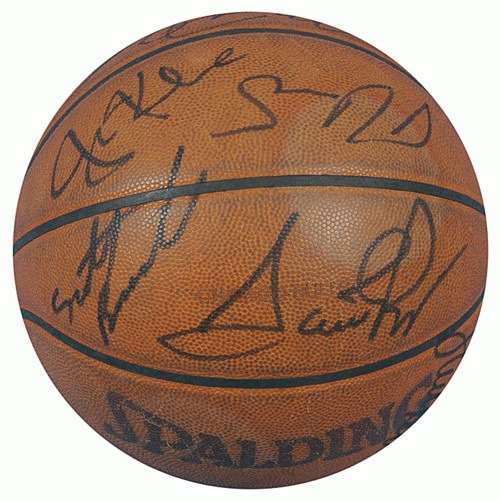 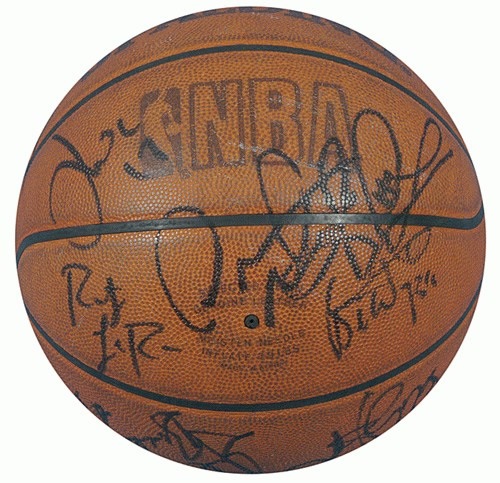 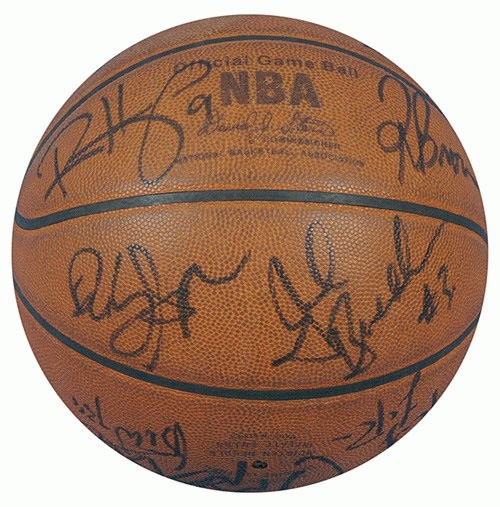 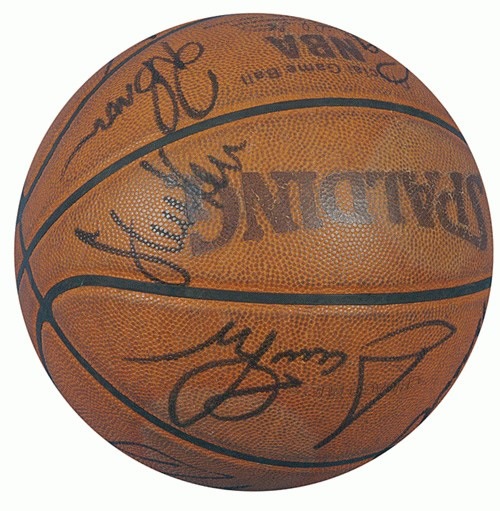 Spalding NBA Official Game Ball signed by fifteen members of the 1997-1998 World Champion Chicago Bulls, including Michael Jordan. Ideally, the ball is accompanied by a letter of authenticity directly from the Chicago Bulls attesting to its provenance. The letter, dated August 14, 2002, and written on official Bulls stationery, reads in part: "Thank you for your interest in the Chicago Bulls and your participation in our silent auction at the 23rd Annual National Sports Collectors Convention. Please accept this letter as a receipt for your purchase of an autographed Chicago Bulls Team Practice-Used Basketball from the 1997-1998 season for $1,050. Please note that Dennis Rodman did not sign this ball. All proceeds benefit CharitaBulls, the Bulls charity foundation." Signed by David Kurland, Director of Community Relations for the Bulls. Included on the ball are the signatures of Michael Jordan (on one of the Spalding panels, grading "9"), Scottie Pippen, Dennis Rodman (signature obviously added at a later date), Steve Kerr, Joe Kleine, Bill Wennington, Jud Buechler, Randy Brown, Ron Harper, Dickey Simpkins, Rusty LaRue, and Scott Burrell. All of the signatures have been scripted in black Sharpie and average "9" in grade. The 1997-1998 season marked the sixth and final World Championship for the Bulls during Michael Jordan's tenure with the club. Chicago Bulls World Championship team-signed balls with Michael Jordan, especially those signed on official NBA game balls, are exceedingly rare. According to the former owner of this ball, one of the foremost basketball collectors in the hobby, this is the only 1997-1998 Chicago Bulls team-signed ball he has ever seen originating directly from the team. As noted in the letter, this ball was used by the Bulls in practice and, as such, displays moderate wear associated with court use. The team name "Chicago Bulls" is also factory stamped on the ball. This is an exceptional and rare Chicago Bulls team-signed ball dating from Michael Jordan's sixth and final World Championship season with the club. LOA from James Spence/JSA. Reserve $400. Estimate $800/$1,200. SOLD FOR $1,998