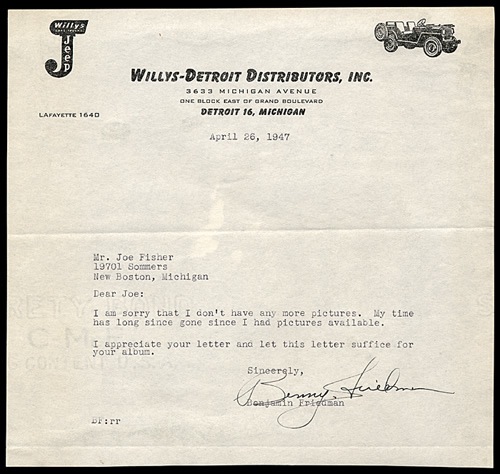 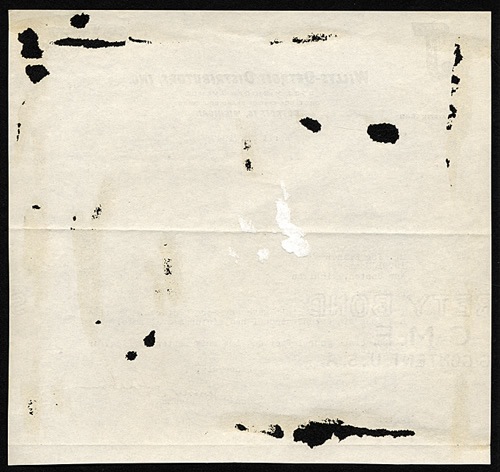 Rare one-page typed letter, dated April 26, 1947, signed by Hall of Fame quarterback Benny Friedman (1905-1982). In his brief letter, written on "Willys-Detroit Distributors, Inc." letterhead, Friedman responds to a fan who had requested an autographed photo. In full: "Dear Joe: I am sorry that I don't have any more pictures. My time has long since gone since I had pictures available. I appreciate your letter and let this letter suffice for your album. Sincerely, Benny Friedman [signed]." Friedman's signature has been boldly scripted in black fountain pen and grades "9." Benny Friedman was a two-time All-America quarterback at Michigan and probably the best all-around player of his day. Unrivaled in his ability as a passer, he was also an outstanding runner, an adequate kicker, and, according to Michigan coach Fielding Yost, the best defensive back in the game. Armed with those credentials, the publicity surrounding Friedman's highly anticipated NFL debut with the Cleveland Bulldogs in 1927 was probably surpassed only by that of Red Grange's in 1925. (Grange later remarked that Friedman was the greatest quarterback he ever played against.) Friedman more than lived up to his billing, as he dominated the quarterback position for the remainder of the decade. Although no official statistics were kept at that time, it is believed that Friedman completed more than fifty-percent of his passes during his first four seasons (the league average was about thirty-five percent). He also led the NFL in touchdown passes each season between the years 1927 and 1930, including a career-high twenty with the New York Giants in 1929. To put that total in proper perspective, it wasn't until 1942 that another team threw for twenty touchdowns. A leg injury in 1931 effectively curtailed his career, but he continued playing until 1934. Friedman's accomplishments on the gridiron later merited his induction into the Pro Football Hall of Fame, the College Football Hall of Fame and the International Jewish Sports Hall of Fame. Despite his fame, Friedman's signature is exceedingly rare today. The primary reason for that is the fact that he passed away in 1982 but wasn't elected to the Pro Football Hall of Fame until 2005; therefore, many early collectors did not actively seek his signature. Ironically, the reason Friedman wasn't elected to the Hall of Fame much earlier was due in large part to his own boastfulness. Friedman constantly bragged about his exploits on the field and openly campaigned for his own induction, an act that was considered in very bad taste by both Hall officials and the media. As a result, it took Hall voters over twenty years after his death to finally recognize pro football's first great passer and one of the finest all-around players of the 1920s. The letter (8.5 x 8 inches) displays two horizontal fold lines and has been trimmed along the bottom border. There is surface paper residue on the reverse as a result of its having been removed from an album. Without regard to the trimming and surface paper residue on the reverse, neither of which impacts its display value, the letter is in overall Excellent condition. Disclosure per section 13 of REA's terms and conditions: This lot has been consigned from the personal collection of an executive or employee of Robert Edward Auctions (or a relative of an executive or employee). LOA from James Spence/JSA. Reserve $300. Estimate $500+. SOLD FOR $411