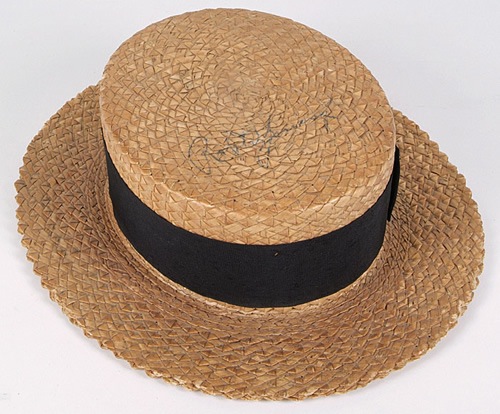 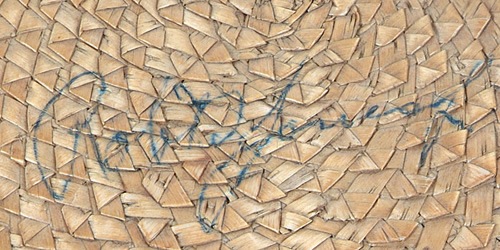 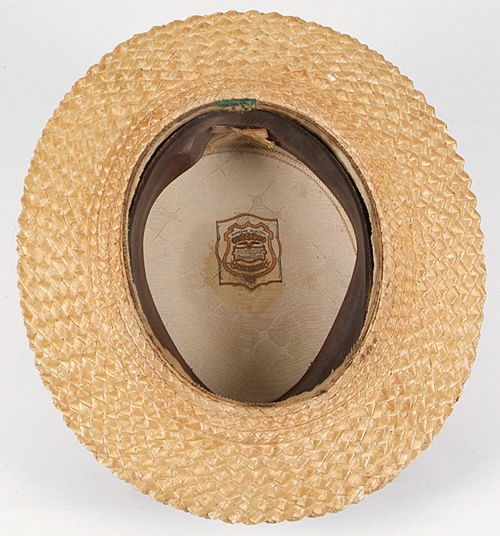 Stylish straw hat, circa 1920s, signed on the top in blue fountain pen by legendary golfer Bobby Jones. The highly uneven surface provided by a straw hat is certainly not the most conducive to fine penmanship but Jones has done an admirable job. We will probably never know the circumstances of the signing of this hat, but it was likely a very big deal to the recipient. We would be surprised if this was anything other than Jones' personal hat, signed and presented under very special circumstances, though it is also possible that a fan happened to be wearing this hat and had the opportunity to have it signed. The signature, scripted "Robert Jones," is easily legible and grades "7." The manufacturer's label on the interior reads "American Fashion Hats - As Good As The Name" and the size, "6 3/4," is stamped on the side beneath the leather headband. Also stamped on the side is a "The United Hatters of North America" union label. The United Hatters of North America was in existence from 1896 through 1934, at which time it merged with the Cloth Hat, Cap and Millinery Workers International Union to form The United Hatters Cap and Millinery Workers International Union. That fact is important, as it allows for a probable dating of the hat to the 1920s, when straw hats were in fashion. It also corresponds precisely to the time when Jones was at the height of his career. While this is by far the most unusual Bobby Jones signed items we have ever offered, its vintage nature makes it an extremely desirable example dating from the "roaring twenties." Jones, of course, was one of the greatest golfers ever to set foot upon the links and in 1930 he accomplished one of the most amazing feats in sports history by winning all four "majors" in one season (the U.S. Open, U.S. Amateur, British Open, and British Amateur). While his accomplishments, which include thirteen "major" championships over the course of seven years (1923-30), speak for themselves, his legendary status is due equally to the unusual circumstances of his career. Jones played golf more for the love of the sport rather than the accolades or money. In fact, he often only played a few months out of the year. Even more shocking was his decision to retire at the age of 28, while he was still at the peak of his career. Following his retirement he produced instructional videos and helped found both Augusta National and the prestigious Masters Tournament. In 1948 he was diagnosed with syringomyelia, a rare degenerative disease of the central nervous system that confined him to a wheelchair for most of his later years. He died in 1971 at the age of 69. The hat displays moderate wear and remains in Excellent condition overall. LOA from James Spence/JSA. Reserve $500. Estimate $1,000+. SOLD FOR $940