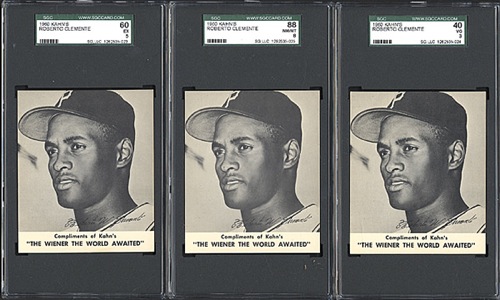 Collection of fifty-one assorted (twenty-six different) 1960 Kahn's Wieners cards, highlighted by three examples of the key-to-the-set Roberto Clemente card. These cards are part of an exceptional circa 1960 original-owner collection of cards that were saved by our consignor in the year of issue and have not seen the light of day since 1960! This is a sharp looking group! 65% range from Ex to Nr/Mt (averaging Ex-Mt), and 35% lesser (mostly Vg). We have submitted the three Clemente cards to SGC for grading and encapsulation. The collection is comprised of the following (quantities in parentheses): Bailey, Gary Bell (3), Gus Bell (3), Burgess, Clemente (3 cards; SGC NM/MT 88, EX 60, and VG 40), Face, Friend (5), Groat, Haddix, Held (4), Henry (2), Hoak, Hook (2), Kline, Kluszewski, Law, Mazeroski (2), McMillian, Perry (3), Pinson (5), Purkey, Score (2), Skinner (3), Stuart, Temple, and Walls. Also included is one 1959 Kahn's (Skinner) and one 1959 Kahn's basketball (Piontek). Kahns from the earlier years (pre-1961) are particularly rare and tend to survive in low grade simply because they were available only in packages of Kahn's Meats (as opposed to also being available by mail in sets direct from the company, as was the case in the later years). The condition of the cards in this group is exceptional for Kahns. Kahn's Wieners cards are unusual and far rarer than most 1960s baseball cards. They are also one of the few food issues of the era. The equivalent SMR value of just two SGC-graded cards alone (not including the one VG 40 of Clemente and the 48 ungraded cards) is $950. Total 53 cards (fifty-one 1960 baseball, one 1959 baseball, and one 1959 basketball). Reserve $1,000. Estimate $2,000+.