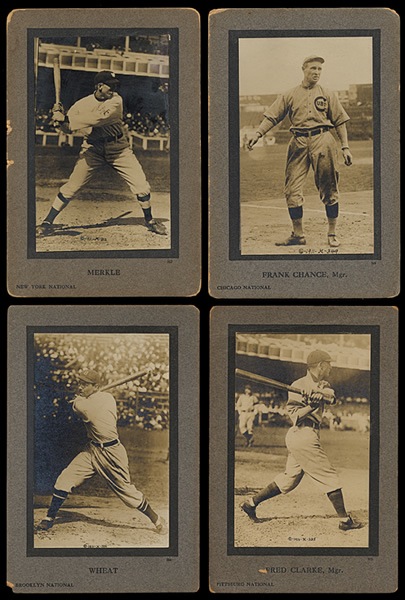 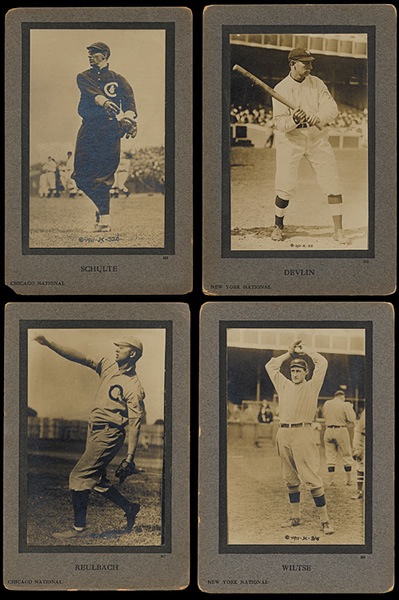 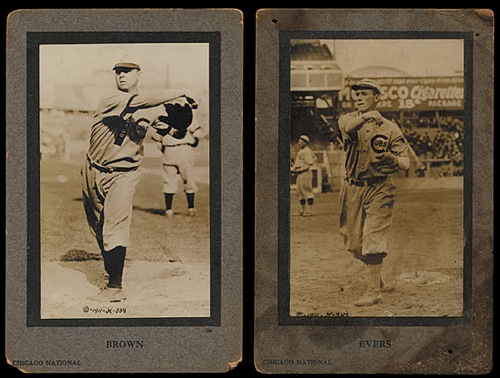 Collection of sixteen different examples from the extremely rare cabinet-card set issued in 1911 by Jones, Keyser & Arras Studios of New York City, highlighted by eight Hall of Famers. Little is known about exactly how this unusual and remarkably high quality set was issued. Each cabinet card (4.75 x 7.25 inches) in the set features a mounted sepia-toned photograph on the front and the studio's name and address in the lower left on the reverse. This is one of the rarest and most substantial of all prewar issues. Even a sample card from this set is extremely rare. The collection consists of the following: #306 Wheat (HOF, lower left corner chipped and pencil notation on the reverse, Gd), 312 Merkle (Gd), 313 Devlin (Vg-Ex), Wiltse (Vg-Ex), 316 Collins (HOF, Gd-Vg), 317 Reulbach (Gd-Vg), 320 Schulte (lower left corner chipped and ink writing on the reverse, Gd), 321 Hofman (Vg), 325 Clarke (HOF, horizontal crease across the top of the mount, Gd-Vg), 326 Griffith (HOF, Gd-Vg), 327 Bresnahan (HOF, pencil notation on the back, Gd-Vg), 329 Lord (Vg), 334 Brown (HOF, two bottom corners chipped and ink writing on the reverse, Gd), 341 Doyle (Gd-Vg), 348 Evers (HOF, Pr), and 349 Chance (HOF, Gd-Vg). Jones, Keyser & Arras cabinet cards are among the rarest and most significant of all 1910-era baseball-card issues. This unique offering is by far the largest collection of these rare cards we have ever encountered, let alone offered. This is an extraordinary group, all the more so due to its inclusion of eight significant Hall of Famers. Total 16 cards. Reserve $5,000. Estimate (open).