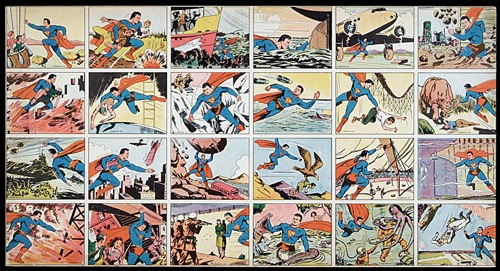 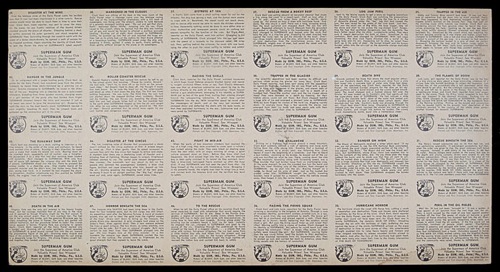 Presented is an extraordinary original complete 24-card uncut sheet of 1940 Superman bubblegum cards, one of nonsport card collecting's greatest classics. This is a complete production sheet with fully printed backs featuring all twenty-four cards from the 1940 R145 Superman second series (cards #25-48). The 72-card "Superman" set was printed on three 24-card sheets. All uncut gum-card sheets from the 1933-1941 era are extremely rare. Superman sheets are even rarer than Goudey baseball sheets, with fewer than ten examples (possibly as few as five or six) in total known to exist. This sheet has a fascinating hobby history: It was among the highlights of a very exciting group of Gum, Inc. material that "walked in" to the Philadelphia card convention in 1976 (back when the show was held at Spring Garden College before moving to Willow Grove and, years later, Fort Washington). The owner of the material was a former Gum, Inc. employee and he put all of his items in the very popular live auction that was held at the show by the show's promoters (in part to help "walk-ins" sell their material). Everything was very modest in value by today's standards. The prize lot of three uncut Gum, Inc. sheets (two Superman sheets including this one plus a 1940 Lone Ranger sheet) were won by future REA president Robert Lifson for a grand total of $140. Soon after, word of the appearance of these incredible sheets at the show traveled to an advanced nonsport collector and he went to the trouble of tracking down the buyer, who he was able to easily reach by phone (after school let out, of course). A deal was immediately struck. His offer of $300 for the lot was accepted, and he has had them ever since! To us, the story is even more amusing in that the buyer and seller never had any occasion to communicate for the next thirty-four years. It was not until the consignor and Robert Lifson were making arrangements to send the sheet in for this auction, speaking on the phone, that something clicked and Robert asked the consignor if he had maybe purchased this sheet along with two others "from a kid in Philadelphia in the 1970s." The answer was yes! The details of the transaction quickly came back to both. After all these years, the sheets had remained in the same collector's hands, and one of the Superman sheets was being sent back for sale at auction! The two other sheets, we are told, will come to us in future auctions. This sheet displays beautifully! Bright and crisp, with brilliant colors, and a simply outstanding overall appearance. There is a very light, extremely insignificant crease through the first three cards in the top row (barely detectable, of no consequence), and some minor edge and corner wear, and a very small moisture stain in the lower right corner of the reverse. Most of the interior cards are Nr/Mt. This sheet has a tremendous display value and an extraordinary overall Excellent appearance. One of the best nonsport sheets in existence, this is a true rarity and prize uncut sheet from one of the key gum-card issues of the 1940s. Ideal for display and really a gem in every way. Dimensions: 18.75 x 10 inches. Reserve $2,500. Estimate (open).