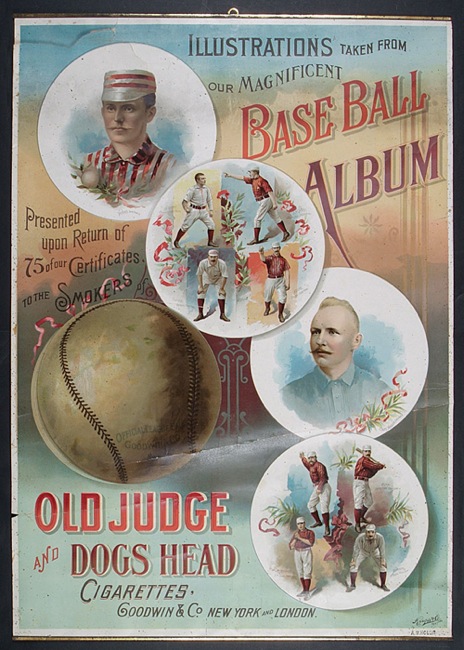 In the field of baseball advertising displays, few pieces can compare aesthetically to that offered here: an 1889 Goodwin Tobacco Round Album poster. Long hailed as one of the preeminent nineteenth-century baseball advertising pieces ever produced, the Goodwin Round Album poster is equally recognized for its extreme rarity. The offered poster is one of just four known examples and, most important, holds the special distinction of being the only one that remains in its complete, original state, with its original metal hanging strips at top and bottom, and with no restoration whatsoever! The fact that it has received no cosmetic enhancements or repairs of any kind is directly related to its provenance. This newly discovered example was part of a fascinating small collection from a non-collecting family in the Boston area which included not one but two particularly exciting rarities: this Goodwin Round Album advertising poster and an 1887 Red Stocking Cigar Card of Charles Radbourn (also offered as one of the featured lots in this auction). Also included were various programs and scorecards dating from the 1880s to the 1910 era (all for games attended by family members), and a few other odds and ends that, while they were not formal collectors, the family saved as devoted fans.

The 1889 A35 Goodwin Round Album, which this poster promotes, is the most beautiful and substantial nineteenth-century baseball tobacco premium ever issued. Available only by mail in redemption of seventy-five coupons found in individual packages of Old Judge and Dogs Head cigarettes, Goodwin Round Albums are extremely scarce today and often found either incomplete or with severe condition problems. The enduring popularity of the album today is directly related to the high-quality lithographic illustrations found within. Four of the albumâ€™s nine circular pages feature single full-color player portraits of Cap Anson, King Kelly, Montgomery Ward, and Charles Comiskey while the remaining five pages each depict four players in full-length poses, including Hall of Famers Mickey Welch, Tim Keefe, Roger Connor, John Ward, and Jim O'Rourke. The reverse of each page contains player records and game schedules printed in blue.

The beauty of this advertising poster lies in its stunning production quality and prominent depiction of four of the illustrated pages from the album, plus the album cover, which is designed in the image of a baseball. Pictured in the display are both the John Montgomery Ward and Cap Anson individual portrait pages as well as two of the four-player pages (one page features Mickey Welch, J. M. Ward, Buck Ewing, and Tim Keefe; the other showcases James O'Rourke, George Gore, Roger Connor, and Hardy Richardson.) The accompanying text reads â€œIllustrations Taken From Our Magnificent Baseball Album â€“ Presented Upon Return of 75 of Our Certificates to the Smokers.â€ The brands of cigarettes in which the coupons can be found are boldly listed along the base: â€œOld Judge and Dogs Head Cigarettes,â€ as is the company name â€œGoodwin & Co., New York and London.â€ The name of publisher, "Knapp and Company," is printed in the lower right corner. These posters were not available to the public and were distributed by Goodwin & Co. exclusively to tobacco retailers for store display, in order to promote demand for the Goodwin Round Album and increase sales of Old Judge and Dogs Head cigarettes in 1889. This poster represents one of the most colorful and attractive baseball retail displays ever produced. Like similar tobacco advertising banners from the era, their fragile nature, combined with the fact that most retailers simply discarded them following the promotion, explains the extreme rarity of the posters today. As mentioned earlier, this one of only four known examples. (The finest example, in pristine condition but missing the metal runners, sold at auction by Wolffers in September 1992 for $198,000; a low-grade example which has since received substantial restoration, was purchased by Charlie Sheen at Sotheby's in the 1990s for approximately $40,000 and has been resold twice since, last selling for $52,854 at Mastro Auctions in April 2003; the third example, also a new but unrelated discovery, was found in an estate sale in 2009, and realized $115,271 at auction). The fact that the Goodwin Round Album poster is actually catalogued in the ACC suggests that at least one other example exists somewhere, probably in the Burdick Collection at The Metropolitan Museum of Art, or in some other institutional collection. (The Round Album poster was catalogued in the 1930s by Burdick as Tobacco Banner "G76" and is one of the most expensive items in the entire American Card Catalogue , listing for a value of $15 at a time when the T206 Wagner was listed at only $50.)

The combination of the posterâ€™s age, fragile nature, and former use has resulted in a number of expected flaws. The poster (20 x 28.5 inches) is complete as issued, including the original metal runners on the top and bottom borders, with the top runner bearing a circular hook for hanging. Moderate foxing is visible throughout. The piece displays a few minor border tears, as well as a seven-inch tear that begins at the top of the left border and proceeds horizontally and then vertically into the image of John Ward's album page in the upper left corner. A number of moderate creases are present, the most significant of which extends horizontally from border to border and runs along the base of the Anson album page. Although the poster is in Good condition, all of the colors remain bright and vibrant and the piece presents at a higher level then its technically accurate grade would indicate. It would frame and display beautifully exactly as is. However, it should be noted that in the hands of a skilled professional restorer this piece could easily be cleaned, the tears and creases repaired, and the back reinforced. If those procedures were accomplished, the poster would most certainly present at an Excellent to Mint level. This is simply a remarkable piece in all respects, one of the most impressive of all nineteenth-century baseball display pieces, and one of the most extraordinary newly discovered pieces that we have ever had the privilege of presenting to the collecting world. Reserve $25,000. Estimate $50,000+. SOLD FOR $105,750