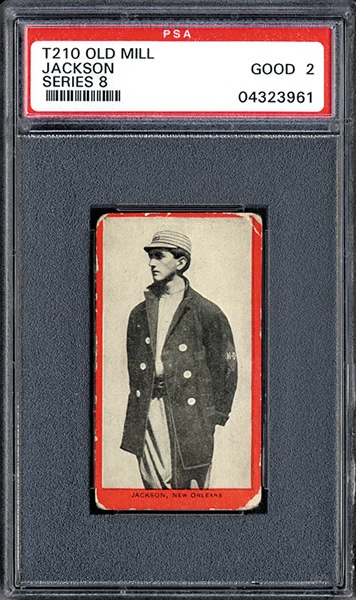 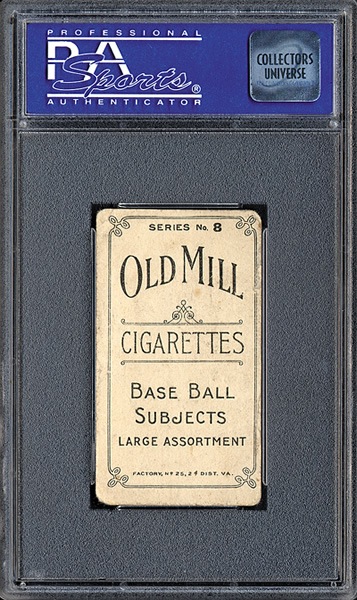 Graded GOOD 2 by PSA. The 1910 T210 Old Mill Tobacco card of Joe Jackson is one of card collecting's "dream cards." This is one of those cards that anyone who really looks at the history of cards, and understands what has been issued for all players, will appreciate as one of the most fascinating and noteworthy baseball cards ever issued. It is also the only tobacco card of Joe Jackson, and one of the very few cards of Jackson ever issued. This particular example has the added distinction of being one of the most important cards that once resided in the legendary Barry Halper Collection. This card features Jackson as a minor leaguer with New Orleans in 1910. This is not, in fact, Jackson's rookie card, as he appears in the 1909 E90-1 American Caramel series with the Philadelphia Athletics. Connie Mack discovered Jackson and gave him his first chance in the Majors. Jackson played a total of ten games with the A's in 1908 and 1909. He spent the majority of 1909 in the minors and started the 1910 season in New Orleans. Mack traded him to Cleveland in the middle of the 1910 season with the provision that he would not report until his New Orleans season was over. This rare Old Mill card features Jackson in 1910 with New Orleans. The T210 set is comprised of eight different series, each representing a different minor league. With 640 players, it is the largest tobacco set of the twentieth century and is immediately identifiable due to its distinctive red borders. Jackson is part of "Series 8," which features Southern Leaguers, and which happens to be the rarest series of the T210 Old Mill set. Understandably, Joe Jackson is by far the key card in the set. Fewer than ten Joe Jackson Old Mill cards are currently known to exist, and it is without question one of his rarest and most sought after cards.

As is often the case with these red-bordered cards, there is some wear to the red borders, mostly in the corners. The card has an extremely insignificant light diagonal surface crease near the upper left corner, another insignificant surface crease to the right of Jackson's elbow (one needs to tilt the card in the correct light to even see either of these), and a very small crease which is easily seen in the upper right corner. None of these creases are distracting or even affect the integrity of the card or the image of Jackson. The only primary condition flaw worth noting is the rounding of the corners, which is naturally common wear for T210s or any 1910-era tobacco cards. The wear to the edges is less than normally found with T210s; while white of course shows in the corners where there is rounding, virtually none shows on the balance of the borders. Centered towards the top left (approximately 40/60 L/R and 30/70 T/B), with a bright, clean, crisp image, and strong printing to the advertisement on the reverse. This card features a tremendous photographic image of a young Joe Jackson, looking forward to an exciting Major League career. The contrast and sharp detail in the photo are extraordinary. Every button, every line on his cap, even the detail of the patch on his sleeve is crisp and flawlessly clear. The reverse (which exactly like the front is centered slightly to the top right) is relatively clean and with a very boldly printed advertisement for Old Mill Cigarettes. This is an extremely attractive example, one of fewer than ten known and with extraordinary provenance, of one of card collecting's rarest and most desirable cards, featuring the legendary Joe Jackson as a minor leaguer early in his baseball career. Reserve $25,000. Estimate (open). SOLD FOR $111,625