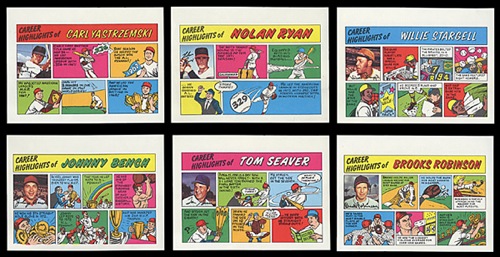 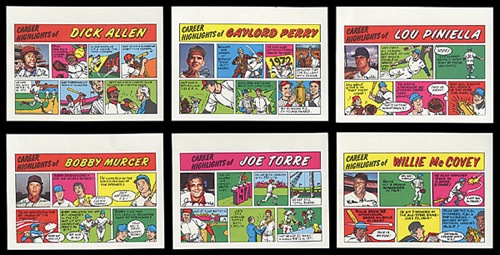 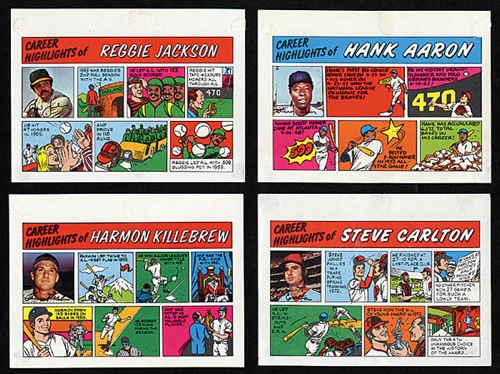 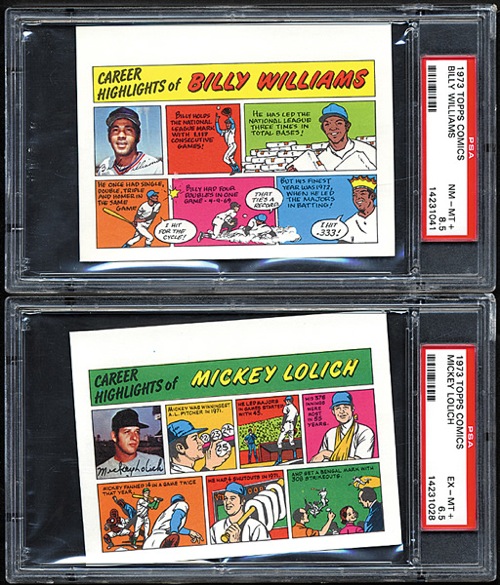 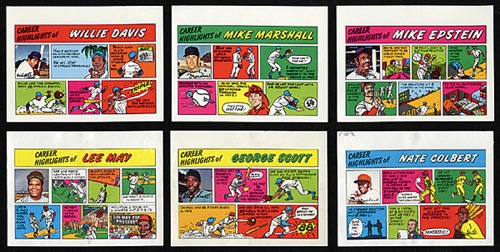 Presented is a remarkable high-grade complete set of one of the rarest, most colorful, and most fascinating of all Topps Test issues: The 1973 Topps Baseball Comic Bubble Gum test set. The 1973 Topps Comics set never saw distribution to the public but was printed and some comics were even packaged with gum. The "cards" in the set were actually also wrappers, designed to wrap around a large, rectangular stick of bubble gum, with the comic design appearing on the wrapper's interior side. The design of the set appears to have been inspired by Topps' Bazooka Joe comics, but are much larger, higher quality, include a photo, and were intended to serve as the exterior wrapper (as opposed to an interior wrapper, as was the case with Bazooka Joe comics). The Baseball Comic wrappers each present a mini-bio of the featured player, in comic strip form, with a small color inset photo of the player in the upper left. The reverses are all the same, featuring the exterior wrapper design with advertising for "Baseball Comic Bubble Gum" and a small image of the Johnny Bench comic from the set. The Baseball Comic Bubble Gum set is extremely noteworthy to collectors due to its rarity, distinctive design, and the fact that so many significant stars are included (and the 1973 Topps Comic is one of the "Holy Grail" rarities for each of the many stars in the set). The twenty-four players are Hank Aaron (HOF), Dick Allen, Johnny Bench (HOF), Steve Carlton (HOF), Nate Colbert, Willie Davis, Mike Epstein, Reggie Jackson (HOF), Harmon Killebrew (HOF), Mickey Lolich, Mike Marshall, Lee May, Willie McCovey (HOF), Bobby Murcer, Lou Piniella, Gaylord Perry, Brooks Robinson (HOF), Nolan Ryan (HOF), George Scott, Tom Seaver (HOF), Willie Stargell (HOF), Joe Torre, Billy Williams (HOF), and Carl Yastrzemski (HOF). This is a remarkable set in terms of condition. Seventeen of the twenty-four Baseball Comics comprising this complete set were never wrapped around around a stick of gum (let alone glued in three spots along the top border as intended). They are essentially flawless, perfectly flat proof examples. These seventeen include Hall of Famers Bench, Ryan, Seaver, McCovey, Stargell, Robinson, Williams, and Yastrzemski. The remaining seven wrappers (Aaron, Carlton, Colbert, Jackson, Killebrew, May, and Scott) were once actually wrapped around the stick of bubble gum as intended (with the exception of Scott, which is listed here because it has a couple light creases and technically grades Vg, though still has an overall Excellent appearance). All were very carefully removed from "packs" with great care taken to not cause any damage to the wrapper/comic. (The way this issue is designed, if care is not taken there is a danger of causing tears to the comic). The bubble gum has long been discarded, but fortunately the comics remain, and each of the seven wrappers are now flat, showing slight signs of glue pulls in the white border outside the cartoon area. These small defects are common to the opened wrappers, (in fact, they are impossible to avoid) and have been noted in detail for the sake of accuracy, as well as to distinguish and properly recognize the ideal proof-like state of the seventeen comics in this set that have never been wrapped or glued as designed and intended. Without reference to these small defects common to opened wrappers, the opened comic wrappers are in Excellent condition. The seventeen never-wrapped proof comics are all in stunning Ex-Mt to Nr/Mt-Mt condition, with most of the wrappers having a Nr/Mt-Mt appearance. Two of the wrappers have been graded and encapsulated by PSA: M. Lolich (EX-MT+ 6.5) and B. Williams (NM-MT+ 8.5). This is the first complete set of these colorful modern rarities we have offered in over twenty years! To the best of our knowledge, all 1973 Topps Baseball Comics known can all be traced back to hobby pioneer Woody Gelman, who was the art director for Topps. Gelman secured a small quantity of the set for distribution within the hobby, but to the best of our knowledge not a single set of Baseball Comics actually reached the hands of collectors before a fire at the warehouse of Gelman's Card Collectors Company destroyed the entire stock. Fortunately, he kept a small group at home for his personal collection. It is a very likely that all of the few surviving known Baseball Comics sets and singles in the entire hobby originate from Gelman's personal collection. This is an extraordinary complete set of this unbelievably rare and highly desirable Topps test issue. Total 24 wrappers. Reserve $2,500. Estimate $5,000+. SOLD FOR $17,625