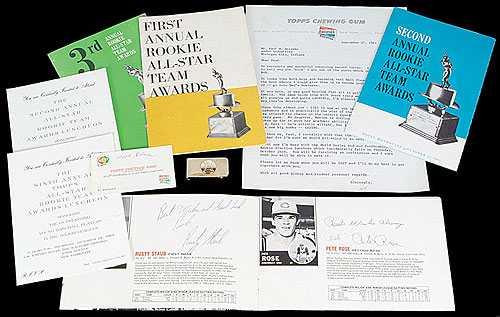 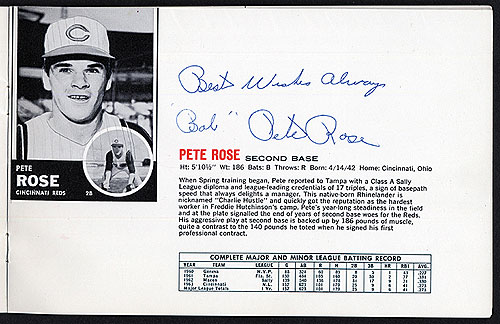 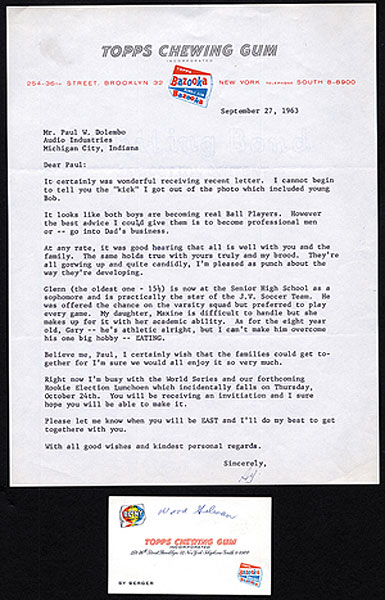 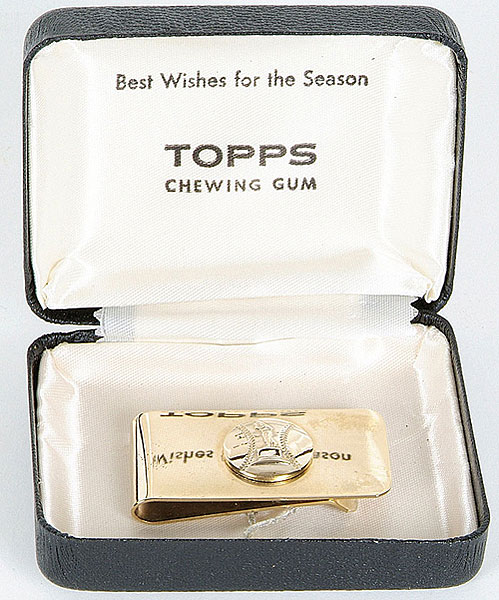 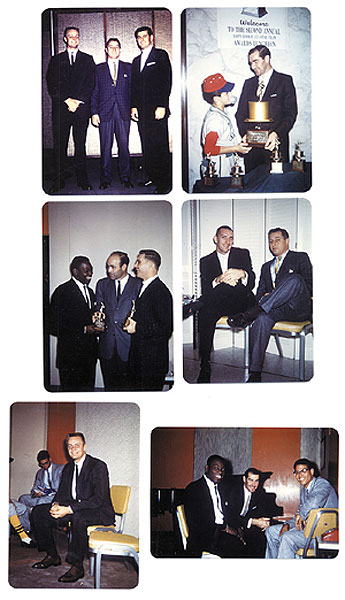 Rare and fascinating collection of early 1960s programs, letters, invitations, photos, and other memorabilia related to Topps' Annual Rookie All-Star Team Awards luncheons, including two which feature, respectively, the rookie signatures of Pete Rose and Billy Williams. To the best of our knowledge, the signatures of both Rose and Williams displayed here in these programs represent one of the few signature examples known for each player that can be conclusively dated to his rookie season. What is also significant with regard to the 1963 program is that it offers collectors a rare glimpse of what Pete Rose's rookie card would have looked like had he been issued his own card in 1963. Rose did appear in the 1963 Topps set, but his image was squeezed onto a single card (#537 "1963 Rookie Stars") with three other players. For each rookie selected that year, Topps created a 1963 mockup card to illustrate his respective biographical page. Therefore, the 1963 program offered here is highly desirable both to baseball-card and Pete Rose collectors. The fact that Rose also personally signed this program of course adds to the appeal of this example. In 1959, Sy Berger, one of the chief executives at Topps and the man known today as "The Father of the Bubble-Gum Card," came up with the idea of honoring the top rookie ballplayers in each league by establishing the Topps Rookie All-Star Team Award. Of course, Berger's main objective in selecting an all-star rookie team was to further promote Topps' annual card issues. Not only were the recipients featured in the following year's set with special "All-Star Rookie Team" cards, but the only way in which kids could vote for their favorite players was by filling in and returning a preprinted ballot card, which, conveniently, could be found in packs of Topps trading cards. To Berger's delight, the concept was a huge success, both with baseball fans and card collectors, and Topps garnered even further publicity by honoring each year's recipients at a formal luncheon held in New York at season's end. This collection features programs from four of the first five Topps Annual Rookie All-Star Team Awards luncheons, including the very first one from 1959 and two others that have been signed on the interior by many of the recipients. Also accompanying is a signed letter from Sy Berger discussing the 1963 awards luncheon. It should be noted that all of the material in this collection originates from a gentleman who personally attended the luncheons and who obtained all of the autographs in person at the time. 1-4) Four Different Topps Annual Rookie All-Star Team Awards Banquet Programs (each 5.5 x 8.5 inches) . Comprised of 1959 (first year; Vg), 1960 (Ex), 1961 (Vg-Ex; signed), and 1963 (Gd/Vg; signed) . The 1961 book features the blue-ink signatures (grading "10") of Howard Koplitz (Topps Minor League Player-of-the-Year Award recipient) and nine of the ten All-Star Rookie Team Award recipients: Billy Williams, Joe Torre, Jake Wood, Dick Howser, Charlie Smith, Lee Thomas, Floyd Robinson, Don Schwall, and Jack Curtis (missing only J. C. Martin). All of the signatures are prefaced with the salutation "To Bob and Jim." An additional signature, "Tony Martine" (unknown; no Major League player by that name) appears on the back cover. The 1963 program features the blue-ink signatures ("10") of Elston Howard (on cover), John Briggs (twice), and nine of the ten All-Star Rookie Team Award recipients: Rusty Staub, Pete Rose, Pete Ward, Jimmie Hall, Vic Davalillo, Tommy Harper, Jesse Gonder, Ray Culp, and Gary Peters (missing only Al Weiss). All of the signatures are personalized either "To Bob," "To Jim," or "To Bob and Jim," with the exception of Howard's signature. 5 ) Sy Berger Signed Letter . One-page typed letter, dated September 27, 1963, and written on official "Topps Chewing Gum" letterhead, signed in blue ink (grading "7") by Sy Berger (signed simply "Sy"). In his letter, written to a friend, Berger talks about their respective families, in particular their children, and closes by mentioning the upcoming luncheon: "Right now I'm busy with the World Series and our forthcoming Rookie Election Luncheon which incidentally falls on Thursday, October 24. You will be receiving an invitation and I sure hope you will be able to make it." 8.5 x 11 inches. Ex; with normal mailing folds. 6-9 ) Three Topps All-Star Rookie Team Awards Luncheon Invitations and an RSVP Card. Comprised of 1960 (Vg; with an edge tear and creasing), 1964 (Vg; with an edge tear), and 1965 (Ex; with original mailing envelope). Each measures 5 x 6.75 inches. Also included is a 1964 RSVP card (4.5 x 3 inches; Ex-Mt) and return envelope (4.75 x 3.25 inches, Vg-Ex). 10) Topps Money Clip. This clip was most likely given to all of the attendees at one of the luncheons. The front of the clip displays a representation of a baseball that features the raised design of the Topps Rookie All-Star Team Award. Nr-Mt, with only minor surface wear. Complete with its original presentation case that is lettered "Best Wishes for the Season - Topps Chewing Gum" on the interior. Vg . 11) Sy Berger Topps Business Card. The name "Wood Gelman" is written in blue ink on the front of the card. 3.75 x 2.25 inches. Ex. 12-17) Six Snapshot Photos Taken at the 1960 Awards Ceremony . Six color photos (each 3.5 x 5 inches) that were taken at the Second Annual Topps Rookie All-Star Team Awards Luncheon held in 1960. Among the players pictured are Julian Javier, Dick Stigman, Chuck Estrada, and Ron Hansen. Nr-Mt. This is an extraordinary and unique collection of items relating to the earliest years of the Topps Rookie All-Star Team Awards. LOA from James Spence/JSA. Total: 17 items. Reserve $500. Estimate (open). SOLD FOR $4,994