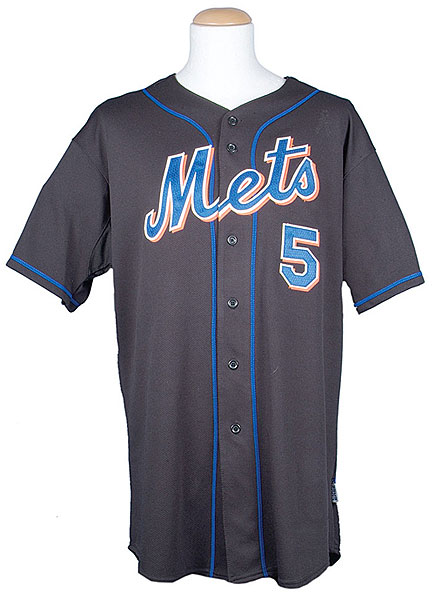 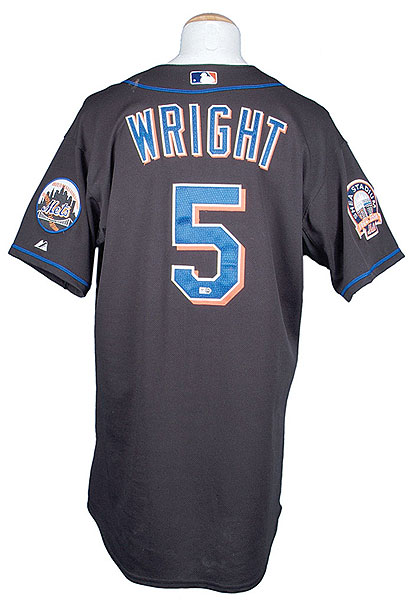 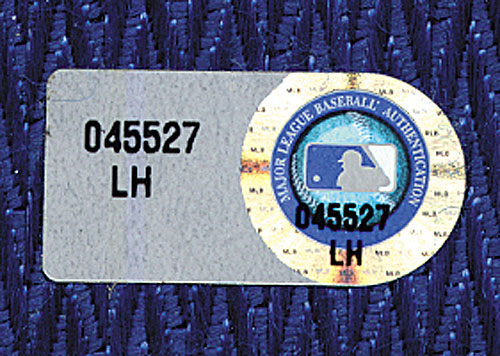 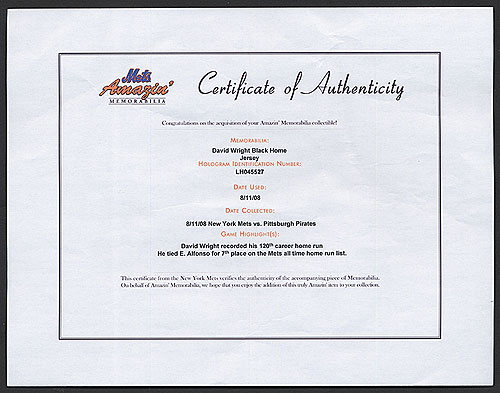 New York Mets black home jersey worn by perennial All-Star third baseman David Wright on August 11, 2008, in a game against the Pittsburgh Pirates in which he hit his 120th career home run. This jersey was obtained directly from the New York Mets and its game-used status is fully attested to by both the club (in the form of an official LOA) and Major League Baseball (in the form of an authentication hologram affixed to the jersey). The accompanying LOA from the Mets notes, among other things, the official MLB hologram number ("LH045527"), the date on which it was worn ("8/11/08"), the date it was collected ("8/11/08 New York Mets vs Pittsburgh Pirates"), and game highlights ("David Wright recorded his 120th career home run - He tied E. Alfonso for 7th place on the Mets all time home run list"). The black knit jersey is lettered "Mets" across the front and features the number "5" on both the left breast and reverse. "Wright" is lettered on the reverse above the number. All letters and numerals are appliqued in tricolor tackle twill (blue, white, and orange). A Mets team patch appears on the left sleeve, while the right sleeve features a Shea Stadium commemorative patch (2008 was the Mets' last season of play at Shea). Located on the interior left front tail are a "Majestic" label, which includes the size ("48"), and two flag tags, reading, respectively, "Taper" and "+1 inch Body." Original and unaltered, the jersey displays light wear, including modest soil stains on the left shoulder and left breast. Wright gave the Mets an early lead against the Pirates on August 11, 2008, at Shea Stadium, when he blasted a three-run home run in the first inning off of Zach Duke to give the club a 3-0 lead. He later added a double in five at bats, but unfortunately, the Pirates rallied for three runs in the top of the ninth to pull out a 7-5 win. As noted in the LOA Wright's home run, which was his twenty-third of the season, was also the 120th of his career. Wright finished the year with 33 home runs, 124 RBI, and a .302 batting average. One of the game's top young third baseman, Wright has batted over .300 in five of his first six full seasons and is a five-time All-Star. This is a highly significant Wright game jersey that is not only fully documented and authenticated by both the team and MLB, but also dates from the club's final season at Shea. Reserve $500. Estimate $1,000/$1,500. SOLD FOR $1,528