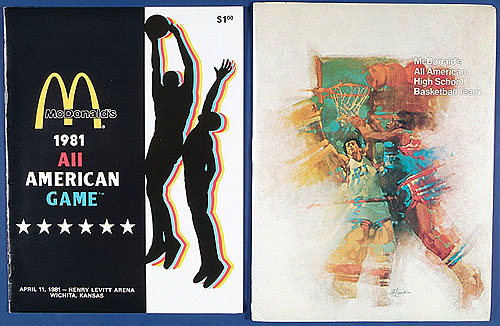 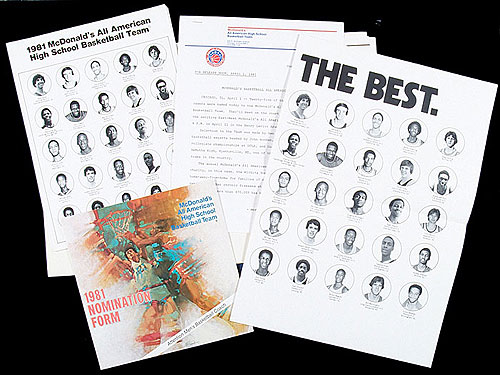 Michael Jordan's prodigious basketball skills first received national attention not at the University of North Carolina, but at the 1981 McDonald's All-American Game, which was the showcase event for the nation's top high school basketball players. Offered here are two exceedingly rare items relating to that game. 1) The first is the official 1981 McDonald's All-American Game program. The twenty-page program (8 x 11.5 inches) features portrait photos and brief biographies of each player, including Michael Jordan and many others who later graduated to the NBA. This is one of only a few examples of this program we have ever seen (an example signed by Jordan also appears in this auction). In Excellent to Mint condition. 2) The second piece is the official 1981 McDonald's All-American Game press kit that was distributed to members of the local media. Housed in a folder featuring a generic basketball illustration on the cover, the packet contains press releases, rosters, statistics, a 1981 ballot form, and information on former participants. The highlight of the packet is a fold-out poster (21 x 15 inches, unfolded) featuring portrait images of all twenty-five participants in the game, including Jordan, Adrian Branch, Patrick Ewing, Chris Mullin, Milt Wagner, and Ed Pinckney. This is the first example we have ever seen of this extremely early and rare Jordan-related basketball item. In Excellent to Mint condition. Total: 2 items. Reserve $200. Estimate $400/$600. SOLD FOR $940