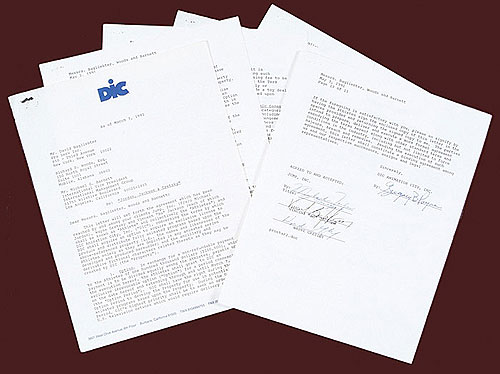 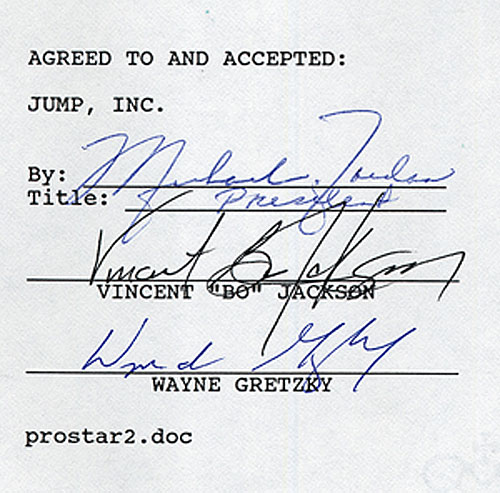 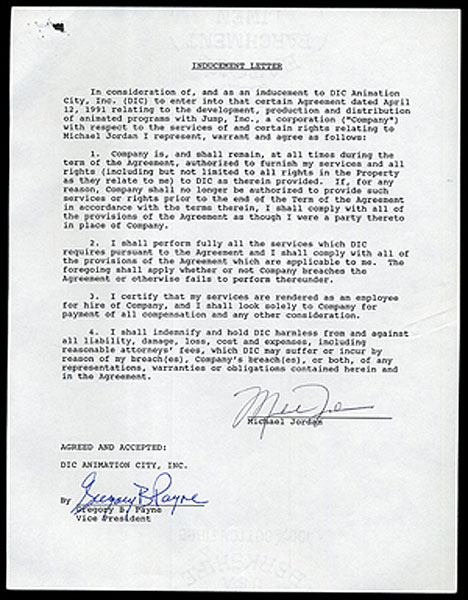 This thirteen-page contract, dated May 3, 1991, features the signatures of the three greatest athletes in their respective sports at the time: Michael Jordan, Wayne Gretzky, and Bo Jackson. Additionally, the contract is accompanied by a one-page inducement letter signed by Jordan. The contract, between DIC Animation City, Inc. ("DIC"), and Jordan, Gretzky, and Jackson ("Athletes") allows DIC to acquire an exclusive license to produce and distribute fully animated programs based upon the names and likenesses of the Athletes. In return, the Athletes are to receive a non-refundable payment of $100,000 (divided equally) and other compensation, including royalties. It has been signed on the final page in blue ink by Michael Jordan and Wayne Gretzky, and in black ink by Bo Jackson. Also signed by Gregory B. Payne for DIC. Accompanying the contract is a one-page inducement letter signed in black ink by Michael Jordan and a nine-page "Exhibit A" document that provides the "Definition of Net Profits." Each of the signatures has been flawlessly rendered and grades "10." All of the pages offered here in this agreement display staple holes in the upper left corner and a small tear resulting from the removal of the staples. (All of the pages are now individually housed in plastic sleeves together in a ring binder.) Without regard to the small tear in the upper left corner of each page, the document is in Excellent to Mint condition. This is a remarkable document in that we have never seen, and probably never will again, these three signatures on a single item, be it a photo, ball, or even an autograph album page. Jordan and Gretzky are universally regarded as the two greatest all-time players in their respective sports and only a career-ending injury kept Jackson from reaching his full potential both on the football field and baseball diamond. LOA from James Spence/JSA. Reserve $500. Estimate $1,000+. SOLD FOR $2,644