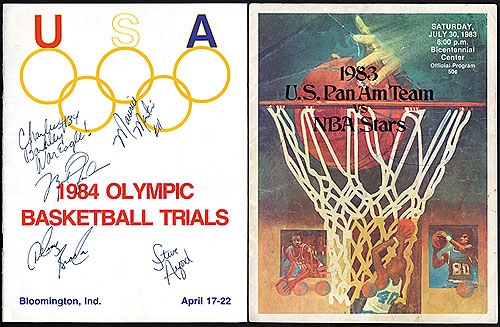 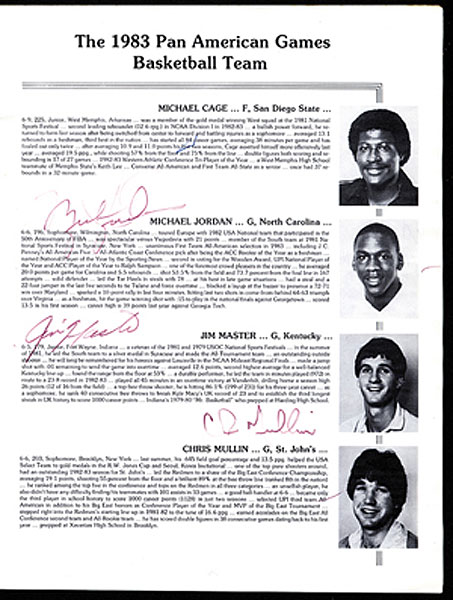 Two extremely early Michael Jordan signed programs relating to his international basketball career. These are the first examples of each program signed by Jordan that we have ever seen. 1) 1983 U.S. Pan Am Team vs. NBA Stars program. The twelve-page program has been signed on the interior in blue marker by the following eight members of the U.S. Pan Am Team: Michael Jordan (grading "8"), Jim Master, Chris Mullin, Ed Pinckney, Greg Stokes, Sam Perkins, Leon Wood, and Jack Hartman (coach). Each player has signed in the area near his photo. Signatures range from "8" to "10," averaging "9." The program (8.5 x 11 inches) has some light staining on the front and rear covers and a few creases. In Very Good condition. 2) 1984 Olympic Basketball Trials program. The twenty-four page program has been signed on the cover in blue ink by five team candidates: Michael Jordan ("10"), Charles Barkley, Maurice Martin, Delray Brooks, and Steve Alford. All of the signatures grade "10." The program (8.5 x 11 inches) has been scored in ink on the interior and is in Excellent condition overall. These are two rare, highly desirable, and historically significant Michael Jordan signed items dating from his early amateur career. Total: 2 programs. LOA from James Spence/JSA. Reserve $300. Estimate $500++. SOLD FOR $1,645