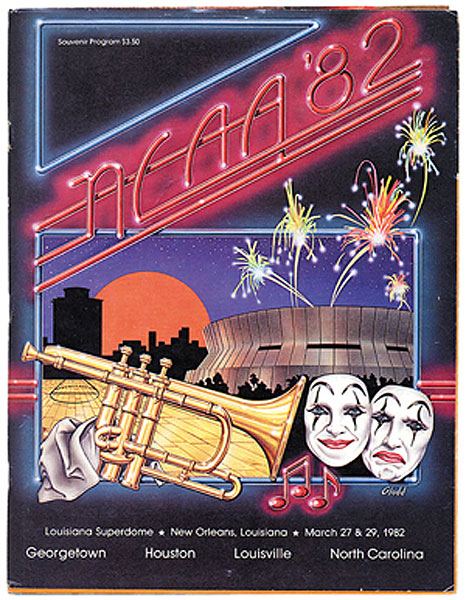 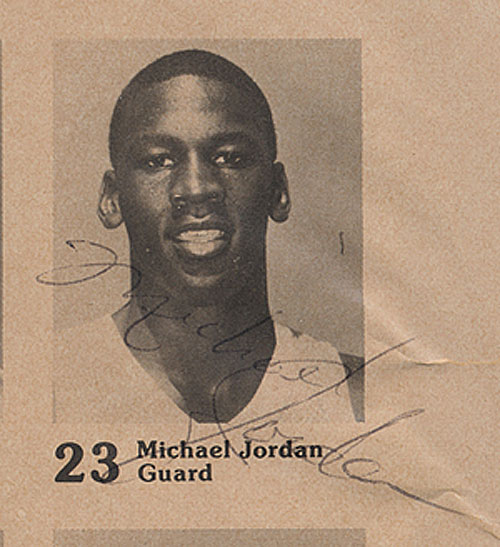 1982 men's basketball Final Four program signed on the interior in blue ink by the following ten members of the NCAA Champion North Carolina Tar Heels: Michael Jordan (grading "8"), Sam Perkins, Matt Doherty, James Worthy, Warren Martin, Timo Makkonen, Jeb Barlow, Jim Braddock, Buzz Peterson, and Lynwood Robinson. All of the signatures, penned in the area of each player's respective photo, grade "8" or "9." Jordan made the most important shot of his young career in the NCAA Championship game against Georgetown, nailing a short jumper with seventeen seconds left to give North Carolina a one-point lead that they did not relinquish. The victory was especially sweet for coach Dean Smith, who earned his first NCAA Championship after twenty years as head coach of the Tar Heels. This is a very rare, significant, and early Michael Jordan signed item. This is an extraordinary early Jordan-signed item, and the only signed example of this important program we have ever seen. The 128-page program (8.5 x 11 inches) has not been scored and is in Excellent condition overall. LOA from James Spence/JSA. Reserve $300. Estimate $500/$1,000+. SOLD FOR $940