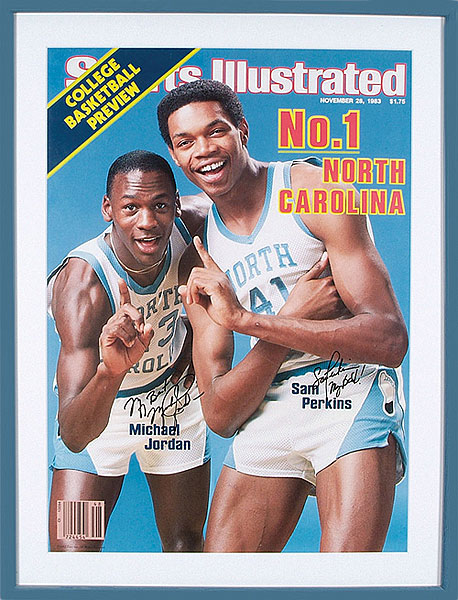 This rare poster, which replicates the cover of the November 28, 1983, issue of Sports Illustrated , pictures Michael Jordan and Sam Perkins as members of the University of North Carolina basketball team and has been signed by each player atop his respective image. Both players have signed the piece in black Sharpie (grading "10") and each has added the phrase "My Best" next to his name. According to our consignor, Jordan collector extraordinaire James Rubino, this poster, which is an artist's proof, is one of only two known examples. It was produced by the photographer in the hopes of possibly mass marketing it for retail sale, but the project never got off the ground. As noted by the graphics, this was the cover to Sports Illustrated' s 1983 "College Basketball Preview" issue, which ranked North Carolina as the number-one team in the country to start the year. Jordan and Perkins were North Carolina's top two returning players from the club's 1982 NCAA Championship team, with Jordan regarded as one of the top players in all of college basketball at the time. This is obviously one of the most unique and highly visual Michael Jordan signed items in existence dating from his collegiate career and represents one of the highlights of our consignor's world-class Michael Jordan collection. The poster (20 x 27.5 inches) has a few very light creases (of no consequence, nearly all are only visible when viewed at certain angles, mentioned strictly for the sake of extreme accuracy); otherwise in Excellent to Mint condition. Framed to total dimensions of 25 x 33 inches. LOA from James Spence/JSA. Reserve $500. Estimate (open). SOLD FOR $1,293