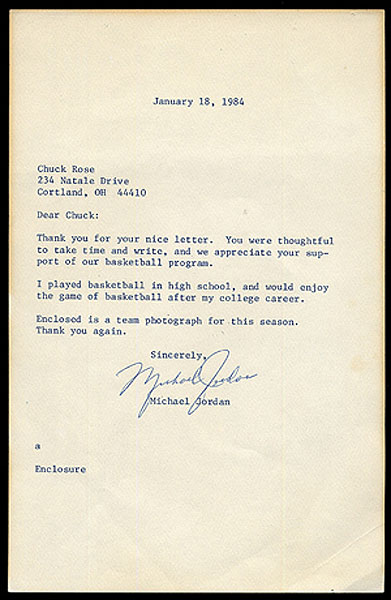 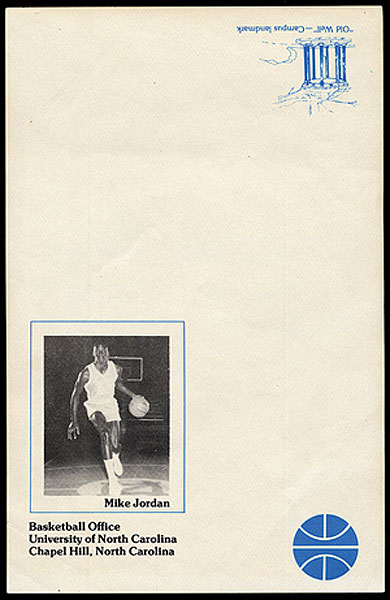 College basketball players on scholarship, in addition to playing ball, often have to perform other perfunctory duties as well, such as corresponding with potential donors and alumni. Even the great Michael Jordan, in the midst of his finest collegiate season at North Carolina, was not above having to find time to sit down and sign a number of letters to "friends" of the program. Although these letters were written and typed by staff members, the athletes did personally sign them, often as quickly as possible so that they could get back to practice. Such is the business of Division 1 big-time basketball. Offered here is one rare example, written on Jordan's personalized University of North Carolina "Basketball Office" stationery, in which he exchanges brief pleasantries and includes the gift of a team photo. The one-page typed letter, dated January 18, 1984, reads as follows: "Dear Chuck: Thank you for the nice letter. You were thoughtful to take time and write, and we appreciate your support of our basketball program. I played basketball in high school, and would enjoy the game of basketball after my college career. Enclosed is a team photograph for this season. Thank you again. Sincerely, Michael Jordan [signed]." Jordan's signature is flawlessly scripted in blue ink and grades "10." The reverse features a small photo of Jordan in uniform, below which is the printed notation: Basketball Office/University of North Carolina/Chapel Hill, North Carolina." Included with the letter is the 8 x 10-inch black-and-white team photo (with stamped facsimile signatures of all of the players and coaches) that originally accompanied Jordan's letter. This is an extremely rare Michael Jordan signed item dating from his collegiate career. Not only is it the first such Jordan-signed letter we have ever offered, it is also the first we have ever seen. The letter (5.5 x 8.5 inches) displays light toning along all four borders (possibly from having once been framed) and a few minor creases. In Very Good to Excellent condition overall. The photo displays a number of moderate creases and is in Very Good condition. Total: 2 items (letter and photo). LOA from James Spence/JSA. Reserve $500. Estimate $1,000++ SOLD FOR $1,998